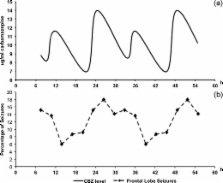 Approximately one-third of patients with epilepsy continue to have seizures despite antiepileptic therapy. Many seizures occur in diurnal, sleep/wake, circadian, or even monthly patterns. The relationship between biomarkers and state changes is still being investigated, but early results suggest that some of these patterns may be related to endogenous circadian patterns whereas others may be related to wakefulness and sleep or both. Chronotherapy, the application of treatment at times of greatest seizure susceptibility, is a technique that may optimize seizure control in selected patients. It may be used in the form of differential dosing, as preparations designed to deliver sustained or pulsatile drug delivery or in the form of ‘zeitgebers’ that shift endogenous rhythms. Early trials in epilepsy suggest that chronopharmacology may provide improved seizure control compared with conventional treatment in some patients. The present article reviews chronopharmacology in the treatment of epilepsy as well as future treatment avenues.

A proposed diagnostic scheme for people with epileptic seizures and with epilepsy: report of the ILAE Task Force on Classification and Terminology.

Usha Misra, Jayantee Kalita (2010)
Japanese encephalitis (JE) is one of the most important endemic encephalitis in the world especially in Eastern and Southeastern Asia. JE affects over 50,000 patients and results in 15,000 deaths annually. JE virus is a single stranded positive sense RNA virus belonging to family flaviviridae. JE virus is transmitted through a zoonotic cycle between mosquitoes, pigs and water birds. Humans are accidentally infected and are a dead end host because of low level and transient viremia. In the northern region, large epidemics occur during summers whereas in the southern region JE tends to be endemic: cases occur throughout the year with a peak in the rainy season. Occurrence of JE is more closely related to temperature than to humidity. JE is regarded as a disease of children in the endemic areas but in the newly invaded areas, it affects both the adults and children because of the absence of protective antibodies. For every patient of JE, there are large numbers of subclinical cases (25-1000). Symptomatic JEV infection manifests with nonspecific febrile illness, aseptic meningitis or encephalitis. Encephalitis manifests with altered sensorium, seizures and focal neurological deficit. Acute flaccid paralysis may occur due to anterior horn cell involvement. A wide variety of movement disorders especially transient Parkinsonian features and dystonia (limb, axial, orofacial) are reported in 20-60% patients. JE mainly affects thalamus, corpus striatum, brainstem and spinal cord as revealed by MRI and on autopsy studies. Coinfection of JE and cysticercosis occurs because of the important role of pigs in the life cycle of both JEV and cysticercosis. Laboratory diagnosis of JE is by IgM capture ELISA, which has high sensitivity and specificity. In the absence of specific antiviral therapy, JE is managed by symptomatic and supportive therapies and preventive measures. Purified formalin inactivated mouse brain derived vaccine and live attenuated vaccine (SA 14-14-2) are available; the latter is reported to be safe, effective and cheap. The role of Chimeric recombinant attenuated JE vaccine is under investigation. Control of JE is related to the wider issues of hygiene, environment, education and economy. (c) 2010 Elsevier Ltd. All rights reserved.

Paradoxical timing of the circadian rhythm of sleep propensity serves to consolidate sleep and wakefulness in humans.

Derk-Jan Dijk, Charles Czeisler (1994)
The contribution of the circadian pacemaker and the sleep homeostat to sleep tendency and consolidation was quantified by forced desynchrony of the sleep-wake cycle from the circadian pacemaker in eight men who lived in time-isolation for 33-36 days. Analysis of 175 polygraphically recorded sleep episodes revealed that the circadian pacemaker and the sleep homeostat contribute about equally to sleep consolidation, and that the phase relationship between these oscillatory processes during entrainment to the 24-h day is uniquely timed to facilitate the ability to maintain a consolidated bout of sleep at night and a consolidated bout of wakefulness throughout the day.