The POM Monoclonals: A Comprehensive Set of Antibodies to Non-Overlapping Prion Protein Epitopes 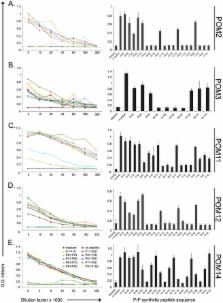 PrP Sc, a misfolded and aggregated form of the cellular prion protein PrP C, is the only defined constituent of the transmissible agent causing prion diseases. Expression of PrP C in the host organism is necessary for prion replication and for prion neurotoxicity. Understanding prion diseases necessitates detailed structural insights into PrP C and PrP Sc. Towards this goal, we have developed a comprehensive collection of monoclonal antibodies denoted POM1 to POM19 and directed against many different epitopes of mouse PrP C. Three epitopes are located within the N-terminal octarepeat region, one is situated within the central unstructured region, and four epitopes are discontinuous within the globular C-proximal domain of PrP C. Some of these antibodies recognize epitopes that are resilient to protease digestion in PrP Sc. Other antibodies immunoprecipitate PrP C, but not PrP Sc. A third group was found to immunoprecipitate both PrP isoforms. Some of the latter antibodies could be blocked with epitope-mimicking peptides, and incubation with an excess of these peptides allowed for immunochromatography of PrP C and PrP Sc. Amino-proximal antibodies were found to react with repetitive PrP C epitopes, thereby vastly increasing their avidity. We have also created functional single-chain miniantibodies from selected POMs, which retained the binding characteristics despite their low molecular mass. The POM collection, thus, represents a unique set of reagents allowing for studies with a variety of techniques, including western blotting, ELISA, immunoprecipitation, conformation-dependent immunoassays, and plasmon surface plasmon resonance-based assays.

H. P. Lipp,  H Büeler,  H Bluethmann … (1992)
PrPC is a host protein anchored to the outer surface of neurons and to a lesser extent of lymphocytes and other cells. The transmissible agent (prion) responsible for scrapie is believed to be a modified form of PrPC. Mice homozygous for disrupted PrP genes have been generated. Surprisingly, they develop and behave normally for at least seven months, and no immunological defects are apparent. It is now feasible to determine whether mice devoid of PrPC can propagate prions and are susceptible to scrapie pathogenesis.

Anke Krebber,  Susanne Bornhauser,  Jörg Burmester … (1997)
A prerequisite for the use of recombinant antibody technologies starting from hybridomas or immune repertoires is the reliable cloning of functional immunoglobulin genes. For this purpose, a standard phage display system was optimized for robustness, vector stability, tight control of scFv-delta geneIII expression, primer usage for PCR amplification of variable region genes, scFv assembly strategy and subsequent directional cloning using a single rare cutting restriction enzyme. This integrated cloning, screening and selection system allowed us to rapidly obtain antigen binding scFvs derived from spleen-cell repertoires of mice immunized with ampicillin as well as from all hybridoma cell lines tested to date. As representative examples, cloning of monoclonal antibodies against a his tag, leucine zippers, the tumor marker EGP-2 and the insecticide DDT is presented. Several hybridomas whose genes could not be cloned in previous experimental setups, but were successfully obtained with the present system, expressed high amounts of aberrant heavy and light chain mRNAs, which were amplified by PCR and greatly exceeded the amount of binding antibody sequences. These contaminating variable region genes were successfully eliminated by employing the optimized phage display system, thus avoiding time consuming sequencing of non-binding scFv genes. To maximize soluble expression of functional scFvs subsequent to cloning, a compatible vector series to simplify modification, detection, multimerization and rapid purification of recombinant antibody fragments was constructed.

Expression of amino-terminally truncated PrP in the mouse leading to ataxia and specific cerebellar lesions.

I Hegyi,  J Götz,  T Blättler … (1998)
The physiological role of prion protein (PrP) remains unknown. Mice devoid of PrP develop normally but are resistant to scrapie; introduction of a PrP transgene restores susceptibility to the disease. To identify the regions of PrP necessary for this activity, we prepared PrP knockout mice expressing PrPs with amino-proximal deletions. Surprisingly, PrP lacking residues 32-121 or 32-134, but not with shorter deletions, caused severe ataxia and neuronal death limited to the granular layer of the cerebellum as early as 1-3 months after birth. The defect was completely abolished by introducing one copy of a wild-type PrP gene. We speculate that these truncated PrPs may be nonfunctional and compete with some other molecule with a PrP-like function for a common ligand.

Publisher ID: 08-PONE-RA-06090R1
DOI: 10.1371/journal.pone.0003872
PMC ID: 2592702
PubMed ID: 19060956
Copyright statement: Polymenidou et al. This is an open-access article distributed under the terms of the Creative Commons Attribution License, which permits unrestricted use, distribution, and reproduction in any medium, provided the original author and source are credited.