Immunotherapy in pancreatic ductal adenocarcinoma (PDAC) treatment faces serious challenges, due particularly to the poor immunogenicity. Cancer cell-derived small extracellular vesicles (sEVs) play important roles in damaging the immune system. However, the effects of pancreatic cancer-derived sEVs on T lymphocytes are unknown. Here we investigated changes in phenotypes and signal transduction pathways in sEVs-treated T lymphocytes. We identified the overexpression of immune checkpoint proteins PD-1, PD-L1, CTLA4, and Tim-3 and the enrichment of FOXP3+ Treg cluster in sEVs-treated T lymphocytes by CyTOF. Gene set enrichment analysis revealed that DNA damage response and metabolic pathways might be involved in sEVs-induced Tregs. ATM, AMPK, SIRT1, SIRT2, and SIRT6 were activated sequentially in sEVs-treated T lymphocytes and essential for sEVs-upregulated expressions of FOXO1A, FOXO3A, and FOXP3. Our study reveals the impact and mechanism of pancreatic cancer cell-derived sEVs on T lymphocytes and may provide insights into developing immunotherapy strategies for PDAC treatment. 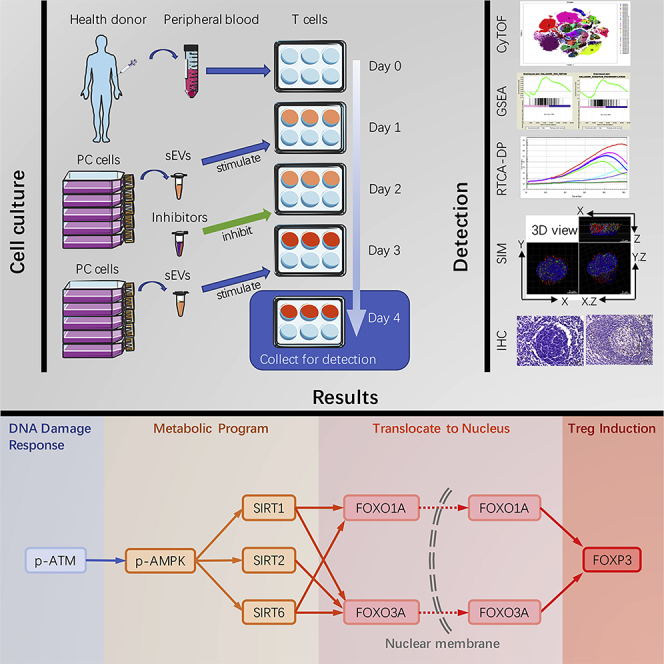 Yosef Shiloh (2003)
Maintenance of genome stability is essential for avoiding the passage to neoplasia. The DNA-damage response--a cornerstone of genome stability--occurs by a swift transduction of the DNA-damage signal to many cellular pathways. A prime example is the cellular response to DNA double-strand breaks, which activate the ATM protein kinase that, in turn, modulates numerous signalling pathways. ATM mutations lead to the cancer-predisposing genetic disorder ataxia-telangiectasia (A-T). Understanding ATM's mode of action provides new insights into the association between defective responses to DNA damage and cancer, and brings us closer to resolving the issue of cancer predisposition in some A-T carriers.

K. Teng, M Adam Mahmood, C Wu … (1985)
Using ferritin-labeled protein A and colloidal gold-labeled anti-rabbit IgG, the fate of the sheep transferrin receptor has been followed microscopically during reticulocyte maturation in vitro. After a few minutes of incubation at 37 degrees C, the receptor is found on the cell surface or in simple vesicles of 100-200 nm, in which the receptor appears to line the limiting membrane of the vesicles. With time (60 min or longer), large multivesicular elements (MVEs) appear whose diameter may reach 1-1.5 micron. Inside these large MVEs are round bodies of approximately 50-nm diam that bear the receptor at their external surfaces. The limiting membrane of the large MVEs is relatively free from receptor. When the large MVEs fuse with the plasma membrane, their contents, the 50-nm bodies, are released into the medium. The 50-nm bodies appear to arise by budding from the limiting membrane of the intracellular vesicles. Removal of surface receptor with pronase does not prevent exocytosis of internalized receptor. It is proposed that the exocytosis of the approximately 50-nm bodies represents the mechanism by which the transferrin receptor is shed during reticulocyte maturation.

Mariantonia Logozzi, Angelo De Milito, Luana Lugini … (2009)
Background Metastatic melanoma is an untreatable cancer lacking reliable and non-invasive markers of disease progression. Exosomes are small vesicles secreted by normal as well as tumor cells. Human tumor-derived exosomes are involved in malignant progression and we evaluated the presence of exosomes in plasma of melanoma patients as a potential tool for cancer screening and follow-up. Methodology/Principal Findings We designed an in-house sandwich ELISA (Exotest) to capture and quantify exosomes in plasma based on expression of housekeeping proteins (CD63 and Rab-5b) and a tumor-associated marker (caveolin-1). Western blot and flow cytometry analysis of exosomes were used to confirm the Exotest-based findings. The Exotest allowed sensitive detection and quantification of exosomes purified from human tumor cell culture supernatants and plasma from SCID mice engrafted with human melanoma. Plasma levels of exosomes in melanoma-engrafted SCID mice correlated to tumor size. We evaluated the levels of plasma exosomes expressing CD63 and caveolin-1 in melanoma patients (n = 90) and healthy donors (n = 58). Consistently, plasma exosomes expressing CD63 (504±315) or caveolin-1 (619±310) were significantly increased in melanoma patients as compared to healthy donors (223±125 and 228±102, respectively). While the Exotest for CD63+ plasma exosomes had limited sensitivity (43%) the Exotest for detection of caveolin-1+ plasma exosomes showed a higher sensitivity (68%). Moreover, caveolin-1+ plasma exosomes were significantly increased with respect to CD63+ exosomes in the patients group. Conclusions/Significance We describe a new non-invasive assay allowing detection and quantification of human exosomes in plasma of melanoma patients. Our results suggest that the Exotest for detection of plasma exosomes carrying tumor-associated antigens may represent a novel tool for clinical management of cancer patients.