Utility of the Electrocardiogram in Drug Overdose and Poisoning: Theoretical Considerations and Clinical Implications 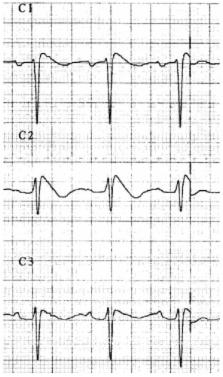 The ECG is a rapidly available clinical tool that can help clinicians manage poisoned patients. Specific myocardial effects of cardiotoxic drugs have well-described electrocardiographic manifestations. In the practice of clinical toxicology, classic ECG changes may hint at blockade of ion channels, alterations of adrenergic tone, or dysfunctional metabolic activity of the myocardium. This review will offer a structured approach to ECG interpretation in poisoned patients with a focus on clinical implications and ECG-based management recommendations in the initial evaluation of patients with acute cardiotoxicity.

Prolonged QTc interval and risk of sudden cardiac death in a population of older adults.

J Kingma,  Bruno C H Stricker,  Jan Heeringa … (2006)
This study sought to investigate whether prolongation of the heart rate-corrected QT (QTc) interval is a risk factor for sudden cardiac death in the general population. In developed countries, sudden cardiac death is a major cause of cardiovascular mortality. Prolongation of the QTc interval has been associated with ventricular arrhythmias, but in most population-based studies no consistent association was found between QTc prolongation and total or cardiovascular mortality. Only very few of these studies specifically addressed sudden cardiac death. This study was conducted as part of the Rotterdam Study, a prospective population-based cohort study that comprises 3,105 men and 4,878 women aged 55 years and older. The QTc interval on the electrocardiogram was determined during the baseline visit (1990 to 1993) and the first follow-up examination (1993 to 1995). The association between a prolonged QTc interval and sudden cardiac death was estimated using Cox proportional hazards analysis. During an average follow-up period of 6.7 years (standard deviation, 2.3 years) 125 patients died of sudden cardiac death. An abnormally prolonged QTc interval (>450 ms in men, >470 ms in women) was associated with a three-fold increased risk of sudden cardiac death (hazard ratio, 2.5; 95% confidence interval, 1.3 to 4.7), after adjustment for age, gender, body mass index, hypertension, cholesterol/high-density lipoprotein ratio, diabetes mellitus, myocardial infarction, heart failure, and heart rate. In patients with an age below the median of 68 years, the corresponding relative risk was 8.0 (95% confidence interval 2.1 to 31.3). Abnormal QTc prolongation on the electrocardiogram should be viewed as an independent risk factor for sudden cardiac death.

Prevention of torsade de pointes in hospital settings: a scientific statement from the American Heart Association and the American College of Cardiology Foundation.