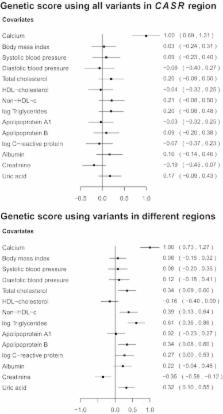 Finding individual-level data for adequately-powered Mendelian randomization analyses may be problematic. As publicly-available summarized data on genetic associations with disease outcomes from large consortia are becoming more abundant, use of published data is an attractive analysis strategy for obtaining precise estimates of the causal effects of risk factors on outcomes. We detail the necessary steps for conducting Mendelian randomization investigations using published data, and present novel statistical methods for combining data on the associations of multiple (correlated or uncorrelated) genetic variants with the risk factor and outcome into a single causal effect estimate. A two-sample analysis strategy may be employed, in which evidence on the gene-risk factor and gene-outcome associations are taken from different data sources. These approaches allow the efficient identification of risk factors that are suitable targets for clinical intervention from published data, although the ability to assess the assumptions necessary for causal inference is diminished. Methods and guidance are illustrated using the example of the causal effect of serum calcium levels on fasting glucose concentrations. The estimated causal effect of a 1 standard deviation (0.13 mmol/L) increase in calcium levels on fasting glucose (mM) using a single lead variant from the CASR gene region is 0.044 (95 % credible interval −0.002, 0.100). In contrast, using our method to account for the correlation between variants, the corresponding estimate using 17 genetic variants is 0.022 (95 % credible interval 0.009, 0.035), a more clearly positive causal effect.

George D W Smith,  J. G. Smith,  Shah Ebrahim … (2003)
Associations between modifiable exposures and disease seen in observational epidemiology are sometimes confounded and thus misleading, despite our best efforts to improve the design and analysis of studies. Mendelian randomization-the random assortment of genes from parents to offspring that occurs during gamete formation and conception-provides one method for assessing the causal nature of some environmental exposures. The association between a disease and a polymorphism that mimics the biological link between a proposed exposure and disease is not generally susceptible to the reverse causation or confounding that may distort interpretations of conventional observational studies. Several examples where the phenotypic effects of polymorphisms are well documented provide encouraging evidence of the explanatory power of Mendelian randomization and are described. The limitations of the approach include confounding by polymorphisms in linkage disequilibrium with the polymorphism under study, that polymorphisms may have several phenotypic effects associated with disease, the lack of suitable polymorphisms for studying modifiable exposures of interest, and canalization-the buffering of the effects of genetic variation during development. Nevertheless, Mendelian randomization provides new opportunities to test causality and demonstrates how investment in the human genome project may contribute to understanding and preventing the adverse effects on human health of modifiable exposures.