Characterization of throat microbial flora in smokers with or without COPD 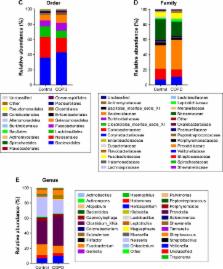 The study aimed to determine the relationship between throat microbiome and COPD. Sixty-five Chinese males (n=20, smokers without COPD; n=45 smokers with COPD) were included. Nonmetric multidimensional scaling indicated differences of microbiome between COPD and controls, but no difference was observed between COPD patients with differing degrees of lung function or disease severity. Rarefaction analyses suggested that operational taxonomic units (OTUs, species-level) richness decreased in COPD. The dominant taxa between COPD and controls were similar, but the proportions of taxonomic distribution were different. The dominant phyla were Bacteroidetes, Proteobacteria, Firmicutes and Fusobacteria. The dominant genera were Haemophilus, Leptotrichia, Porphyromonas, Fusobacterium, Veillonella, Streptococcus, Neisseria and Prevotella. Two dominant OTUs, otu3 ( Veillonella_ dispar) and otu4 ( Streptococcus_unclassified), were identified. Otu3 and its father-level taxa, which were negatively correlated with predicted percent of forced expiratory volume in a second (FEV 1%pred), were increased in COPD. By contrast, otu4 and its father-level taxa, which were positively correlated with FEV 1%pred, were decreased in COPD. Otu4 also showed a slight potential as a COPD biomarker. To conclude, the throat microbiome was different between smokers with or without COPD, which is similar to findings from the lower respiratory tract. This study may strengthen our understanding of the relationship between microbiomes of different airway sites and COPD.

James E. Mcdonough,  Pedro Dimitriu,  M. J. Cooper … (2012)
Based on surface brushings and bronchoalveolar lavage fluid, Hilty and coworkers demonstrated microbiomes in the human lung characteristic of asthma and chronic obstructive pulmonary disease (COPD), which have now been confirmed by others. To extend these findings to human lung tissue samples. DNA from lung tissue samples was obtained from nonsmokers (n = 8); smokers without COPD (n = 8); patients with very severe COPD (Global Initiative for COPD [GOLD] 4) (n = 8); and patients with cystic fibrosis (CF) (n = 8). The latter served as a positive control, with sterile water as a negative control. All bacterial community analyses were based on polymerase chain reaction amplifying 16S rRNA gene fragments. Total bacterial populations were measured by quantitative polymerase chain reaction and bacterial community composition was assessed by terminal restriction fragment length polymorphism analysis and pyrotag sequencing. Total bacterial populations within lung tissue were small (20-1,252 bacterial cells per 1,000 human cells) but greater in all four sample groups versus the negative control group (P < 0.001). Terminal restriction fragment length polymorphism analysis and sequencing distinguished three distinct bacterial community compositions: one common to the nonsmoker and smoker groups, a second to the GOLD 4 group, and the third to the CF-positive control group. Pyrotag sequencing identified greater than 1,400 unique bacterial sequences and showed an increase in the Firmicutes phylum in GOLD 4 patients versus all other groups (P < 0.003) attributable to an increase in the Lactobacillus genus (P < 0.0007). There is a detectable bacterial community within human lung tissue that changes in patients with very severe COPD.

(2012)
The Human Microbiome Project will establish a reference data set for analysis of the microbiome of healthy adults by surveying multiple body sites from 300 people and generating data from over 12,000 samples. To characterize these samples, the participating sequencing centers evaluated and adopted 16S rDNA community profiling protocols for ABI 3730 and 454 FLX Titanium sequencing. In the course of establishing protocols, we examined the performance and error characteristics of each technology, and the relationship of sequence error to the utility of 16S rDNA regions for classification- and OTU-based analysis of community structure. The data production protocols used for this work are those used by the participating centers to produce 16S rDNA sequence for the Human Microbiome Project. Thus, these results can be informative for interpreting the large body of clinical 16S rDNA data produced for this project.

Zhang Wang,  Mona Bafadhel,  Koirobi Haldar … (2016)
Increasing evidence suggests that the lung microbiome plays an important role in chronic obstructive pulmonary disease (COPD) severity. However, the dynamics of the lung microbiome during COPD exacerbations and its potential role in disease aetiology remain poorly understood.We completed a longitudinal 16S ribosomal RNA survey of the lung microbiome on 476 sputum samples collected from 87 subjects with COPD at four visits defined as stable state, exacerbation, 2 weeks post-therapy and 6 weeks recovery.Our analysis revealed a dynamic lung microbiota where changes appeared to be associated with exacerbation events and indicative of specific exacerbation phenotypes. Antibiotic and steroid treatments appear to have differential effects on the lung microbiome. We depict a microbial interaction network for the lung microbiome and suggest that perturbation of a few bacterial operational taxonomic units, in particular Haemophilus spp., could greatly impact the overall microbial community structure. Furthermore, several serum and sputum biomarkers, in particular sputum interleukin-8, appear to be highly correlated with the structure and diversity of the microbiome.Our study furthers the understanding of lung microbiome dynamics in COPD patients and highlights its potential as a biomarker, and possibly a target, for future respiratory therapeutics.