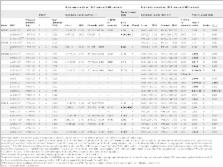 Myopia is the most common ocular disorder worldwide and imposes tremendous burden on the society. It is a complex disease. The MYP6 locus at 22 q12 is of particular interest because many studies have detected linkage signals at this interval. The MYP6 locus is likely to contain susceptibility gene(s) for myopia, but none has yet been identified.

Two independent subject groups of southern Chinese in Hong Kong participated in the study an initial study using a discovery sample set of 342 cases and 342 controls, and a follow-up study using a replication sample set of 316 cases and 313 controls. Cases with high myopia were defined by spherical equivalent ≤ -8 dioptres and emmetropic controls by spherical equivalent within ±1.00 dioptre for both eyes. Manual candidate gene selection from the MYP6 locus was supported by objective in silico prioritization. DNA samples of discovery sample set were genotyped for 178 tagging single nucleotide polymorphisms (SNPs) from 26 genes. For replication, 25 SNPs (tagging or located at predicted transcription factor or microRNA binding sites) from 4 genes were subsequently examined using the replication sample set. Fisher P value was calculated for all SNPs and overall association results were summarized by meta-analysis. Based on initial and replication studies, rs2009066 located in the crystallin beta A4 ( CRYBA4) gene was identified to be the most significantly associated with high myopia (initial study: P = 0.02; replication study: P = 1.88e-4; meta-analysis: P = 1.54e-5) among all the SNPs tested. The association result survived correction for multiple comparisons. Under the allelic genetic model for the combined sample set, the odds ratio of the minor allele G was 1.41 (95% confidence intervals, 1.21-1.64).

A note on exact tests of Hardy-Weinberg equilibrium.

Gonçalo R Abecasis,  Adrian Cutler,  J Wigginton (2005)
Deviations from Hardy-Weinberg equilibrium (HWE) can indicate inbreeding, population stratification, and even problems in genotyping. In samples of affected individuals, these deviations can also provide evidence for association. Tests of HWE are commonly performed using a simple chi2 goodness-of-fit test. We show that this chi2 test can have inflated type I error rates, even in relatively large samples (e.g., samples of 1,000 individuals that include approximately 100 copies of the minor allele). On the basis of previous work, we describe exact tests of HWE together with efficient computational methods for their implementation. Our methods adequately control type I error in large and small samples and are computationally efficient. They have been implemented in freely available code that will be useful for quality assessment of genotype data and for the detection of genetic association or population stratification in very large data sets.

Peter Carmeliet,  Bassem Hassan,  S. Maity … (2006)
The identification of genes involved in health and disease remains a challenge. We describe a bioinformatics approach, together with a freely accessible, interactive and flexible software termed Endeavour, to prioritize candidate genes underlying biological processes or diseases, based on their similarity to known genes involved in these phenomena. Unlike previous approaches, ours generates distinct prioritizations for multiple heterogeneous data sources, which are then integrated, or fused, into a global ranking using order statistics. In addition, it offers the flexibility of including additional data sources. Validation of our approach revealed it was able to efficiently prioritize 627 genes in disease data sets and 76 genes in biological pathway sets, identify candidates of 16 mono- or polygenic diseases, and discover regulatory genes of myeloid differentiation. Furthermore, the approach identified a novel gene involved in craniofacial development from a 2-Mb chromosomal region, deleted in some patients with DiGeorge-like birth defects. The approach described here offers an alternative integrative method for gene discovery.

Polymorphisms associated with cholesterol and risk of cardiovascular events.

Göran Berglund,  Christopher Newton-Cheh,  Joel Hirschhorn … (2008)
Common single-nucleotide polymorphisms (SNPs) that are associated with blood low-density lipoprotein (LDL) or high-density lipoprotein (HDL) cholesterol modestly affect lipid levels. We tested the hypothesis that a combination of such SNPs contributes to the risk of cardiovascular disease. We studied SNPs at nine loci in 5414 subjects from the cardiovascular cohort of the Malmö Diet and Cancer Study. We first validated the association between SNPs and either LDL or HDL cholesterol and subsequently created a genotype score on the basis of the number of unfavorable alleles. We used Cox proportional-hazards models to determine the time to the first cardiovascular event in relation to the genotype score. All nine SNPs showed replication of an association with levels of either LDL or HDL cholesterol. With increasing genotype scores, the level of LDL cholesterol increased from 152 mg to 171 mg per deciliter (3.9 to 4.4 mmol per liter), whereas HDL cholesterol decreased from 60 mg to 51 mg per deciliter (1.6 to 1.3 mmol per liter). During follow-up (median, 10.6 years), 238 subjects had a first cardiovascular event. The genotype score was associated with incident cardiovascular disease in models adjusted for covariates including baseline lipid levels (P<0.001). The use of the genotype score did not improve the clinical risk prediction, as assessed by the C statistic. However, there was a significant improvement in risk classification with the use of models that included the genotype score, as compared with those that did not include the genotype score. A genotype score of nine validated SNPs that are associated with modulation in levels of LDL or HDL cholesterol was an independent risk factor for incident cardiovascular disease. The score did not improve risk discrimination but did modestly improve clinical risk reclassification for individual subjects beyond standard clinical factors. Copyright 2008 Massachusetts Medical Society.