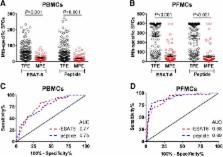 Tuberculosis (TB) remains a major public health concern on a global scale, especially in developing nations. So far, no formal guidelines are available for the diagnosis and treatment of tuberculosis pleurisy. The diagnosis of TB is worsened by the immense difficulty in differential determination of tuberculosis pleural effusion (TPE) and malignant pleural effusion (MPE). The purpose of this investigation is to assess the differential diagnostic efficiencies of the pleural IFN-γ release assay (IGRA) and widely-used biochemical parameters in the distinction analysis of TPE and MPE.

Our results show that the TPE patients have significantly higher M. tuberculosis (Mtb) antigen-specific IFN-γ responses to ESAT-6 protein and peptide pool in the blood compared to MPE patients. TPE patients were also shown to have enriched Mtb antigen-specific IFN-γ responses in pleural effusion than in peripheral blood. Among the widely-used biomarkers, the adenosine deaminase (ADA) and carcinoembryonic antigen (CEA) in pleural effusion were better biomarkers with high sensitivity and specificity to discriminate TPE and MPE. In addition, pleural IGRA could not be affected by the pleural adhesion, and the applications of the pleural IGRA together with ADA and CEA provide a promising approach for the TPE and MPE differential identification.

Our study proposes that the integration of pleural IGRA and ADA, CEA detection could add to more effective diagnosis stratagems in the discernment between TPE and MPE.

José M Porcel (2015)
Tuberculous pleural effusion is one of the most common forms of extrapulmonary tuberculosis (TB). The immediate cause of the effusion is a delayed hypersensitivity response to mycobacterial antigens in the pleural space. For this reason microbiological analyses are often negative and limited by the lengthy delay in obtaining results. In areas with high TB prevalence, pleural fluid adenosine deaminase (ADA) levels greater than 40 U/l argue strongly for TB; in contrast, low levels of pleural ADA have high negative predictive value in low-prevalence countries. The specificity of this enzyme increases if only lymphocytic exudates are considered. The shortcoming of the ADA test is its inability to provide culture and drug sensitivity information, which is paramount in countries with a high degree of resistance to anti-TB drugs. Sputum induction (in addition to pleural fluid) for acid-fast bacilli and culture is a recommended procedure in all patients with TB pleurisy. The microscopic-observation drug-susceptibility assay performed on pleural fluid or pleural tissue increases by two to three times the detection of TB over conventional cultures, and it allows for the identification of multidrug-resistant TB. A reasonable management strategy for pleural TB would be to initiate a four-drug regimen and perform a therapeutic thoracentesis in patients with large, symptomatic effusions.

Morné Vorster,  Brian W Allwood,  Andreas Diacon … (2015)
On a global scale, tuberculosis (TB) remains one of the most frequent causes of pleural effusions. Our understanding of the pathogenesis of the disease has evolved and what was once thought to be an effusion as a result of a pure delayed hypersensitivity reaction is now believed to be the consequence of direct infection of the pleural space with a cascade of events including an immunological response. Pulmonary involvement is more common than previously believed and induced sputum, which is grossly underutilised, can be diagnostic in approximately 50%. The gold standard for the diagnosis of tuberculous pleuritis remains the detection of Mycobacterium tuberculosis in pleural fluid, or pleural biopsy specimens, either by microscopy and/or culture, or the histological demonstration of caseating granulomas in the pleura along with acid fast bacilli (AFB). In high burden settings, however, the diagnosis is frequently inferred in patients who present with a lymphocytic predominant exudate and a high adenosine deaminase (ADA) level, which is a valuable adjunct in the diagnostic evaluation. ADA is generally readily accessible, and together with lymphocyte predominance justifies treatment initiation in patients with a high pre-test probability. Still, false-negative and false-positive results remain an issue. When adding closed pleural biopsy to ADA and lymphocyte count, diagnostic accuracy approaches that of thoracoscopy. The role of other biomarkers is less well described. Early pleural drainage may have a role in selected cases, but more research is required to validate its use and to define the subpopulation that may benefit from such interventions.

Kan Zhai,  Yong Lu,  Huan-Zhong Shi (2016)
Although it is curable, tuberculosis remains one of the most frequent causes of pleural effusions on a global scale, especially in developing countries. Tuberculous pleural effusion (TPE) is one of the most common forms of extrapulmonary tuberculosis. TPE usually presents as an acute illness with fever, cough and pleuritic chest pain. The pleural fluid is an exudate that usually has predominantly lymphocytes. The gold standard for the diagnosis of TPE remains the detection of Mycobacterium tuberculosis in pleural fluid, or pleural biopsy specimens, either by microscopy and/or culture, or the histological demonstration of caseating granulomas in the pleura along with acid fast bacilli, Although adenosine deaminase and interferon-γ in pleural fluid have been documented to be useful tests for the diagnosis of TPE. It can be accepted that in areas with high tuberculosis prevalence, the easiest way to establish the diagnosis of TPE in a patient with a lymphocytic pleural effusion is to generally demonstrate a adenosine deaminase level above 40 U/L. The recommended treatment for TPE is a regimen with isoniazid, rifampin, and pyrazinamide for two months followed by four months of two drugs, isoniazid and rifampin.