Critical appraisal of ticagrelor in the management of acute coronary syndrome 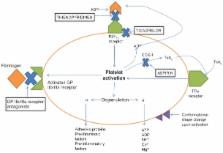 Ticagrelor is a novel P2Y 12 receptor antagonist which, like clopidogrel and prasugrel, functions by blocking adenosine diphosphate-mediated platelet aggregation. However, unlike the aforementioned agents, the binding of ticagrelor to this receptor is reversible. Ticagrelor is also believed to mediate some of its beneficial effects by augmenting the effects of adenosine, which is another unique pharmacologic property of this drug. In terms of antiplatelet effect, ticagrelor is more potent than clopidogrel and produces a faster and stronger inhibition of platelet aggregation. This may also be an advantage of ticagrelor over prasugrel, but this has not been adequately studied. Due to the reversible nature of the binding of ticagrelor to the platelet receptor, ticagrelor has a relatively fast offset of effect, with platelet aggregation approaching pretreatment levels about 3 days after discontinuation of therapy. This has advantages in patients requiring invasive procedures, but also makes medication adherence very important in order to be able to maintain an effective antiplatelet effect. Ticagrelor has been shown to be clinically superior to clopidogrel when given to patients with an acute coronary syndrome, resulting in significantly lower rates of myocardial infarction and vascular death. However, ticagrelor is indicated to be administered with aspirin, and the clinical benefits of ticagrelor may be less when daily dosages of aspirin exceed 100 mg. As expected, bleeding is the most common adverse effect with ticagrelor, although it occurs at rates comparable with those seen for clopidogrel with the exception of noncoronary artery bypass graft-related major bleeding and fatal intracranial bleeds, the latter of which occurs only rarely. Dyspnea is another common adverse effect with ticagrelor, although this is usually not severe and resolves with drug discontinuation. Unlike clopidogrel, there are no known pharmacogenomic concerns with ticagrelor, and emerging data suggest ticagrelor to be effective in patients resistant to clopidogrel, although more study is needed on this topic. While preliminary data suggest ticagrelor to be cost effective when compared with generic clopidogrel, the acquisition cost of ticagrelor is not insignificant and this will likely be an issue for many health care organizations. Currently, ticagrelor is well positioned to assume an active role in the treatment of coronary artery disease due to an impressive efficacy profile and reasonable safety. Its ultimate role in therapy will continue to evolve as studies on this drug continue eg, (Prevention of Cardiovascular Events in Patients with Prior Heart Attack Using Ticagrelor Compared to Placebo on a Background of Aspirin, PEGASUS) and more information hopefully becomes available on its use in clopidogrel nonresponders and relative safety and efficacy compared with prasugrel.

Randomized double-blind assessment of the ONSET and OFFSET of the antiplatelet effects of ticagrelor versus clopidogrel in patients with stable coronary artery disease: the ONSET/OFFSET study.

Mark J Antonino,  Robert S Ledley,  Robert Storey … (2009)
Ticagrelor is the first reversibly binding oral P2Y(12) receptor antagonist. This is the first study to compare the onset and offset of platelet inhibition (IPA) with ticagrelor using the PLATO (PLATelet inhibition and patient Outcomes) trial loading dose (180 mg) with a high loading dose (600 mg) of clopidogrel. In a multicenter, randomized, double-blind study, 123 patients with stable coronary artery disease who were taking aspirin therapy (75 to 100 mg/d) received ticagrelor (180-mg load, 90-mg BID maintenance dose [n=57]), clopidogrel (600-mg load, 75-mg/d maintenance dose [n=54]), or placebo (n=12) for 6 weeks. Greater IPA (20 micromol/L ADP, final extent) occurred with ticagrelor than with clopidogrel at 0.5, 1, 2, 4, 8, and 24 hours after loading and at 6 weeks (P 50% IPA (98% versus 31%, P 70% IPA (90% versus 16%, P<0.0001) in the ticagrelor group than in the clopidogrel group, respectively. A faster offset occurred with ticagrelor than with clopidogrel (4-to-72-hour slope [% IPA/h] -1.04 versus -0.48, P<0.0001). At 24 hours after the last dose, mean IPA was 58% for ticagrelor versus 52% for clopidogrel (P=NS). IPA for ticagrelor on day 3 after the last dose was comparable to clopidogrel at day 5; IPA on day 5 for ticagrelor was similar to clopidogrel on day 7 and did not differ from placebo (P=NS). Ticagrelor achieved more rapid and greater platelet inhibition than high-loading-dose clopidogrel; this was sustained during the maintenance phase and was faster in offset after drug discontinuation.

Clopidogrel with or without omeprazole in coronary artery disease.

Deepak Bhatt,  Byron L Cryer,  Charles Contant … (2010)
Gastrointestinal complications are an important problem of antithrombotic therapy. Proton-pump inhibitors (PPIs) are believed to decrease the risk of such complications, though no randomized trial has proved this in patients receiving dual antiplatelet therapy. Recently, concerns have been raised about the potential for PPIs to blunt the efficacy of clopidogrel. We randomly assigned patients with an indication for dual antiplatelet therapy to receive clopidogrel in combination with either omeprazole or placebo, in addition to aspirin. The primary gastrointestinal end point was a composite of overt or occult bleeding, symptomatic gastroduodenal ulcers or erosions, obstruction, or perforation. The primary cardiovascular end point was a composite of death from cardiovascular causes, nonfatal myocardial infarction, revascularization, or stroke. The trial was terminated prematurely when the sponsor lost financing. We planned to enroll about 5000 patients; a total of 3873 were randomly assigned and 3761 were included in analyses. In all, 51 patients had a gastrointestinal event; the event rate was 1.1% with omeprazole and 2.9% with placebo at 180 days (hazard ratio with omeprazole, 0.34, 95% confidence interval [CI], 0.18 to 0.63; P<0.001). The rate of overt upper gastrointestinal bleeding was also reduced with omeprazole as compared with placebo (hazard ratio, 0.13; 95% CI, 0.03 to 0.56; P = 0.001). A total of 109 patients had a cardiovascular event, with event rates of 4.9% with omeprazole and 5.7% with placebo (hazard ratio with omeprazole, 0.99; 95% CI, 0.68 to 1.44; P = 0.96); high-risk subgroups did not show significant heterogeneity. The two groups did not differ significantly in the rate of serious adverse events, though the risk of diarrhea was increased with omeprazole. Among patients receiving aspirin and clopidogrel, prophylactic use of a PPI reduced the rate of upper gastrointestinal bleeding. There was no apparent cardiovascular interaction between clopidogrel and omeprazole, but our results do not rule out a clinically meaningful difference in cardiovascular events due to use of a PPI. (Funded by Cogentus Pharmaceuticals; ClinicalTrials.gov number, NCT00557921.).