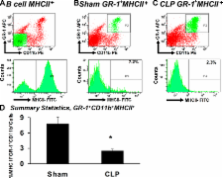 John Osborne,  Timothy Buchman,  Kenneth J. Hui … (2001)
Patients with sepsis have impaired host defenses that contribute to the lethality of the disorder. Recent work implicates lymphocyte apoptosis as a potential factor in the immunosuppression of sepsis. If lymphocyte apoptosis is an important mechanism, specific subsets of lymphocytes may be more vulnerable. A prospective study of lymphocyte cell typing and apoptosis was conducted in spleens from 27 patients with sepsis and 25 patients with trauma. Spleens from 16 critically ill nonseptic (3 prospective and 13 retrospective) patients were also evaluated. Immunohistochemical staining showed a caspase-9-mediated profound progressive loss of B and CD4 T helper cells in sepsis. Interestingly, sepsis did not decrease CD8 T or NK cells. Although there was no overall effect on lymphocytes from critically ill nonseptic patients (considered as a group), certain individual patients did exhibit significant loss of B and CD4 T cells. The loss of B and CD4 T cells in sepsis is especially significant because it occurs during life-threatening infection, a state in which massive lymphocyte clonal expansion should exist. Mitochondria-dependent lymphocyte apoptosis may contribute to the immunosuppression in sepsis by decreasing the number of immune effector cells. Similar loss of lymphocytes may be occurring in critically ill patients with other disorders.

Scott Antonia,  Suzanna Dunn,  T Frost … (2006)
Abnormal dendritic cell differentiation and accumulation of immature myeloid suppressor cells (ImC) is one of the major mechanisms of tumor escape. We tested the possibility of pharmacologic regulation of myeloid cell differentiation using all-trans-retinoic acid (ATRA). Eighteen patients with metastatic renal cell carcinoma were treated with ATRA followed by s.c. interleukin 2 (IL-2). Eight healthy individuals comprised a control group. As expected, the cancer patients had substantially elevated levels of ImC. We observed that ATRA dramatically reduced the number of ImC. This effect was observed only in patients with high plasma concentration of ATRA (>150 ng/mL), but not in patients with lower ATRA concentrations (<135 ng/mL). Effects of ATRA on the proportions of different dendritic cell populations were minor. However, ATRA significantly improved myeloid/lymphoid dendritic cell ratio and the ability of patients' mononuclear cells to stimulate allogeneic T cells. This effect was associated with significant improvement of tetanus-toxoid-specific T-cell response. During the IL-2 treatment, the ATRA effect was completely eliminated. To assess the role of IL-2, specimens from 15 patients with metastatic renal cell carcinoma who had been treated with i.v. IL-2 alone were analyzed. In this group also, IL-2 significantly reduced the number and function of dendritic cells as well as T-cell function. These data indicate that ATRA at effective concentrations eliminated ImC, improved myeloid/lymphoid dendritic cell ratio, dendritic cell function, and antigen-specific T-cell response. ATRA treatment did not result in significant toxicity and it could be tested in therapeutic combination with cancer vaccines.