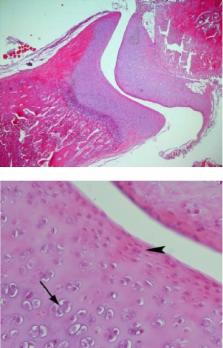 We aimed to investigate the effect of topical application of a Copper indomethacin (Cu-Indo) gel preparation on monosodium iodoacetate (MIA) induced arthritis of the knee joint of rats and to test our hypothesis that copper complex of indomethacin could be a more potent anti-inflammatory agent than its parent compound.

After induction of osteoarthritis by the intracapsular injection of 50 μL with 40 mg/mL MIA, we compared the anti-inflammatory efficacy and safety of a topical application of 1% indomethacin gel in a dose of 1 g/kg of the gel (equivalent to 10 mg/kg of the active substance) daily for 3 weeks versus three decremental dose levels of Cu-Indo gel: an equivalent dose, half the dose, and 25% of the dose of indomethacin. Anti-inflammatory efficacy was assessed in all treated groups by measurement of serum inflammatory cytokines: interleukin 6, interleukin 8, and tumor necrosis factor alpha; and by the weekly assessment of knee joint swelling. Joint mobility and motor coordination were also assessed once weekly by the accelerating rotarod apparatus; histopathological examination of affected joints was also performed. Safety of topical application of Cu-Indo (0.25, 0.5, and 1 g/kg) for up to 3 months to rats’ skin was determined by the estimation of a complete blood count, liver and kidney functions, and histopathologic examination for target tissues.

Cu-Indo gel at lower doses was superior to or at least as effective as its parent substance, indomethacin, in most of the studied parameters of inflammation. The lowest tested dose of Cu-Indo, corresponding to 25% of the parent substance indomethacin, exhibited the highest efficacy in reducing the elevated serum-tested interleukins and in increasing the time of duration on the rotarod test, whereas its effect on reduction of edema and tumor necrosis factor alpha was comparable to that of the others. After 3 months of daily application, there were no notable changes in studied safety parameters with the lowest Cu-Indo dose, but the group treated with the higher dose showed a small but statistically significant increase in serum-unconjugated bilirubin and a slight decrease in hemoglobin levels, red blood cells, and platelet count, with normal indices denoting a slight hemolytic effect at the highest dose.

Cu-Indo gel has potent anti-inflammatory activity against joint inflammation in the MIA-treated rat model of osteoarthritis at doses of 0.25, 0.5, and 1 g/kg. The lowest studied dose was better on both safety and efficacy parameters.

Roberto Guzman,  Mark G Evans,  Susan Bove … (2015)
Osteoarthritis (OA) is a degenerative joint disease characterized by joint pain and a progressive loss of articular cartilage. Studies to elucidate the pathophysiology of OA have been hampered by the lack of a rapid, reproducible animal model that mimics both the histopathology and symptoms associated with the disease. Injection of mono-iodoacetate (MIA), an inhibitor of glycolysis, into the femorotibial joint of rodents promotes loss of articular cartilage similar to that noted in human OA. Here, we describe the histopathology in the subchondral bone and cartilage of rat (Wistar) knee joints treated with a single intra articular injection of MIA (1 mg) and sacrificed at 1, 3, 5, 7, 14, 28, and 56 days postinjection. Histologically, the early time points (days 1-7) were characterized by areas of chondrocyte degeneration/necrosis sometimes involving the entire thickness of the articular cartilage in the tibial plateaus and femoral condyles. Changes to the subchondral bone, as evidenced by increased numbers of osteoclasts and osteoblasts, were noted at by day 7. By 28 days, there was focal fragmentation and collapse of bony trabeculae with fibrosis and increased osteoclastic activity. By 56 days there were large areas of bone remodeling evidenced by osteoclastic bone resorption and newly formed trabeculae with loss of marrow hematopoietic cells. Subchondral cysts and subchondral sclerosis were present in some rats. In conclusion, intra-articular injection of MIA induces loss of articular cartilage with progression of subchondral bone lesions that mimic those of OA. This model offers a rapid and minimally invasive method to reproduce OA-like lesions in a rodent species.

Mono-iodoacetate-induced experimental osteoarthritis: a dose-response study of loss of mobility, morphology, and biochemistry.

P. Netter,  B Terlain,  L Philippe (Ori) Braitbart … (1997)
To characterize the dose-responsiveness of morphologic and biochemical chondral changes relative to mobility in mono-iodoacetate (MIA)-induced osteoarthritis (OA) in rats. Rat mobility was assessed by biotelemetry. Articular lesions were characterized by macroscopic and histologic examinations. Cartilage proteoglycan metabolism was evaluated by the 1,9-dimethylmethylene blue dye binding assay and by radiosulfate incorporation in patellar cartilage. Spontaneous locomotor activity was rapidly, transiently, and dose-dependently decreased after MIA injection into rat knees (primary response). Thereafter, only high doses (0.3 mg and 3.0 mg) led to a secondary progressive long-term loss of spontaneous mobility on day 15, when subchondral bone was exposed. These 2 doses resulted in significant changes in cartilage proteoglycan concentration at day 15 and a strong inhibition of anabolism in the peripheral patellae by day 2, contrasting with the effects of lower doses (0.01, 0.03, and 0.1 mg). When a sufficient dose of MIA is used, this model can easily and quickly reproduce OA-like lesions and functional impairment in rats, similar to that observed in human disease. These parameters, as well as proteoglycan metabolism, could serve as indicators for studying chondroprotective drugs, or for evaluating the ability of imaging techniques to detect and evaluate chondral lesions.

Differential analgesic effects of morphine and gabapentin on behavioural measures of pain and disability in a model of osteoarthritis pain in rats.

Anthony H. Dickenson,  J Ghandehari,  Jean-Laurent Vonsy (2009)
Osteoarthritis (OA) is associated with chronic debilitating joint pain. Pain is the result of an emotional and sensory experience and preclinical models of OA can thus be useful to better understand the underlying mechanisms of the disease and test new therapeutic options. We induced unilateral knee OA in Sprague-Dawley rats using monosodium iodoacetate (MIA), a glycolysis inhibitor and assessed the effects of acute and chronic morphine and gabapentin using a battery of quantitative behavioural outcome measures of pain and disability. Animals received a single intra-articular injection of 2mg MIA in 25 microl saline, causing inflammation and progressive cartilage degradation. Mechanical and thermal sensitivity as well as ambulatory-evoked pain were then monitored using von Frey hairs, acetone and a rotarod. Once maximum nociceptive responses were reached, chronic bi-daily morphine (3mg/kg s.c.) or gabapentin (30 mg/kg s.c.) were administered for 5 days. We observed a marked biphasic mechanical hypersensitivity that increased and reached a plateau from day 14 (317.6% of control response, p<0.01, with von Frey 6g). Moreover we found a marked cooling hypersensitivity, and validated a novel ambulatory-evoked pain score. These measures were significantly reduced after both acute (13.3% of sham response, p<0.01, von Frey 6g) and chronic (38.3%, p<0.05) morphine whilst only chronic gabapentin (37.0%, p<0.05) had an effect. We show the reliability of the model in terms of mechanical hypersensitivity and demonstrate cooling hypersensitivity and ambulatory-evoked pain. In terms of translational research, the effects of morphine and gabapentin validate the model and suggest trials of these therapeutic approaches in OA patients.