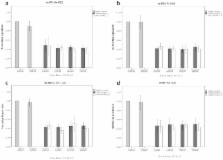 Hereditary transthyretin (TTR) amyloidosis (ATTR) is an autosomal dominant disease characterized by extracellular deposits of amyloid fibrils composed of misfolded TTR. The differences in penetrance and age at onset are vast, both between and within populations, with a generally late onset for Swedish carriers. In a recent study the entire TTR gene including the 3′ UTR in Swedish, French and Japanese ATTR patients was sequenced. The study disclosed a SNP in the V30M TTR 3′ UTR of the Swedish ATTR population that was not present in either the French or the Japanese populations (rs62093482-C>T). This SNP could create a new binding site for miRNA, which would increase degradation of the mutated TTR’s mRNA thus decrease variant TTR formation and thereby delay the onset of the disease. The aim of the present study was to disclose differences in allele specific TTR expression among Swedish V30M patients, and to see if selected miRNA had any effect upon the expression.

Allele-specific expression was measured on nine liver biopsies from Swedish ATTR patients using SNaPshot Multiplex assay. Luciferase activity was measured on cell lines transfected with constructs containing the TTR 3′ UTR. Allele-specific expression measured on liver biopsies from Swedish ATTR patients showed no difference in expression between the two alleles. Neither was there any difference in expression between cell lines co-transfected with two constructs with or without the TTR 3′ UTR SNP regardless of added miRNA.

The SNP found in the 3′ UTR of the TTR gene has no effect on degrading the variant allele’s expression and thus has no impact on the diminished penetrance of the trait in the Swedish population. However, the 3′ UTR SNP is unique for patients descending from the Swedish founder, and this SNP could be utilized to identify ATTR patients of Swedish descent.

The microRNA pathway and cancer.

Pieter Kwak,  Yukihide Tomari,  Shintaro Iwasaki (2010)
MicroRNAs (miRNAs) are ∼22nt long, non-coding RNAs that guide post-transcriptional gene silencing of their target genes and regulate diverse biological processes including cancer. miRNAs do not act alone, but require assembly into RNA-induced silencing complex (RISC). In this review, we summarize how miRNAs are produced, assembled into RISC, and regulate target mRNAs, and discuss how the miRNA pathway is involved in cancer. © 2010 Japanese Cancer Association.

A functional variant at the miR-184 binding site in TNFAIP2 and risk of squamous cell carcinoma of the head and neck.

Sheng Wei,  Mei Zhao,  Jeffrey N. Myers … (2011)
Although the role of TNFAIP2 is still unclear, it is an important gene involved in apoptosis, and there are single-nucleotide polymorphisms (SNPs) at its microRNA (miRNA)-binding sites that could modulate miRNA target gene function. In this study, we evaluated associations of four selected SNPs (rs8126 T > C, rs710100 G > A, rs1052912 G > A and rs1052823 G > T) in the miRNA-binding sites of the 3' untranslated region (UTR) with squamous cell carcinoma of the head and neck (SCCHN) risk in 1077 patients with SCCHN and 1073 cancer-free controls in a non-Hispanic White population. We found that, compared with the rs8126 TT genotype, the variant C allele were associated with increased SCCHN risk in an allele dose-response manner (adjusted odds ratio = 1.48 and 95% confidence interval = 1.06-2.05 for CC, respectively; P(trend) = 0.009). No significant associations were seen for the other three SNPs (rs710100 G > A, rs1052912 G > A and rs1052823 G > T). Additionally, we identified that the rs8126 T > C SNP is within the miR-184 seed binding region in the 3' UTR of TNFAIP2. Further functional analyses showed that the rs8126 variant C allele led to significantly lower luciferase activity, compared with the T allele. In the genotype-phenotype correlation analysis of peripheral blood mononuclear cells from 64 SCCHN patients, the rs8126 CC genotype was associated with reduced expression of TNFAIP2 messenger RNA. Taken together, these findings indicate that the miR-184 binding site SNP (rs8126 T > C) in the 3' UTR of TNFAIP2 is functional by modulating TNFAIP2 expression and contributes to SCCHN susceptibility. Larger replication studies are needed to confirm our findings.

The study was supported by grants from the Swedish Heart and Lung Foundation ( http://www.hjart-lungfonden.se/), Central and Clinical ALF grants, Spearhead grant from Västerbottens county, and research support from the patients’ associations FAMY/AMYL, Norr- and Västerbotten ( http://www.famynorrbotten.se/). The funders had no role in study design, data collection and analysis, decision to publish, or preparation of the manuscript.