The Global Burden of Disease Study 2010: Interpretation and Implications for the Neglected Tropical Diseases 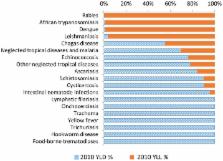 M. Nathan Nair,  Michael Freeman,  Sherine E Gabriel … (2012)
Reliable and timely information on the leading causes of death in populations, and how these are changing, is a crucial input into health policy debates. In the Global Burden of Diseases, Injuries, and Risk Factors Study 2010 (GBD 2010), we aimed to estimate annual deaths for the world and 21 regions between 1980 and 2010 for 235 causes, with uncertainty intervals (UIs), separately by age and sex. We attempted to identify all available data on causes of death for 187 countries from 1980 to 2010 from vital registration, verbal autopsy, mortality surveillance, censuses, surveys, hospitals, police records, and mortuaries. We assessed data quality for completeness, diagnostic accuracy, missing data, stochastic variations, and probable causes of death. We applied six different modelling strategies to estimate cause-specific mortality trends depending on the strength of the data. For 133 causes and three special aggregates we used the Cause of Death Ensemble model (CODEm) approach, which uses four families of statistical models testing a large set of different models using different permutations of covariates. Model ensembles were developed from these component models. We assessed model performance with rigorous out-of-sample testing of prediction error and the validity of 95% UIs. For 13 causes with low observed numbers of deaths, we developed negative binomial models with plausible covariates. For 27 causes for which death is rare, we modelled the higher level cause in the cause hierarchy of the GBD 2010 and then allocated deaths across component causes proportionately, estimated from all available data in the database. For selected causes (African trypanosomiasis, congenital syphilis, whooping cough, measles, typhoid and parathyroid, leishmaniasis, acute hepatitis E, and HIV/AIDS), we used natural history models based on information on incidence, prevalence, and case-fatality. We separately estimated cause fractions by aetiology for diarrhoea, lower respiratory infections, and meningitis, as well as disaggregations by subcause for chronic kidney disease, maternal disorders, cirrhosis, and liver cancer. For deaths due to collective violence and natural disasters, we used mortality shock regressions. For every cause, we estimated 95% UIs that captured both parameter estimation uncertainty and uncertainty due to model specification where CODEm was used. We constrained cause-specific fractions within every age-sex group to sum to total mortality based on draws from the uncertainty distributions. In 2010, there were 52·8 million deaths globally. At the most aggregate level, communicable, maternal, neonatal, and nutritional causes were 24·9% of deaths worldwide in 2010, down from 15·9 million (34·1%) of 46·5 million in 1990. This decrease was largely due to decreases in mortality from diarrhoeal disease (from 2·5 to 1·4 million), lower respiratory infections (from 3·4 to 2·8 million), neonatal disorders (from 3·1 to 2·2 million), measles (from 0·63 to 0·13 million), and tetanus (from 0·27 to 0·06 million). Deaths from HIV/AIDS increased from 0·30 million in 1990 to 1·5 million in 2010, reaching a peak of 1·7 million in 2006. Malaria mortality also rose by an estimated 19·9% since 1990 to 1·17 million deaths in 2010. Tuberculosis killed 1·2 million people in 2010. Deaths from non-communicable diseases rose by just under 8 million between 1990 and 2010, accounting for two of every three deaths (34·5 million) worldwide by 2010. 8 million people died from cancer in 2010, 38% more than two decades ago; of these, 1·5 million (19%) were from trachea, bronchus, and lung cancer. Ischaemic heart disease and stroke collectively killed 12·9 million people in 2010, or one in four deaths worldwide, compared with one in five in 1990; 1·3 million deaths were due to diabetes, twice as many as in 1990. The fraction of global deaths due to injuries (5·1 million deaths) was marginally higher in 2010 (9·6%) compared with two decades earlier (8·8%). This was driven by a 46% rise in deaths worldwide due to road traffic accidents (1·3 million in 2010) and a rise in deaths from falls. Ischaemic heart disease, stroke, chronic obstructive pulmonary disease (COPD), lower respiratory infections, lung cancer, and HIV/AIDS were the leading causes of death in 2010. Ischaemic heart disease, lower respiratory infections, stroke, diarrhoeal disease, malaria, and HIV/AIDS were the leading causes of years of life lost due to premature mortality (YLLs) in 2010, similar to what was estimated for 1990, except for HIV/AIDS and preterm birth complications. YLLs from lower respiratory infections and diarrhoea decreased by 45-54% since 1990; ischaemic heart disease and stroke YLLs increased by 17-28%. Regional variations in leading causes of death were substantial. Communicable, maternal, neonatal, and nutritional causes still accounted for 76% of premature mortality in sub-Saharan Africa in 2010. Age standardised death rates from some key disorders rose (HIV/AIDS, Alzheimer's disease, diabetes mellitus, and chronic kidney disease in particular), but for most diseases, death rates fell in the past two decades; including major vascular diseases, COPD, most forms of cancer, liver cirrhosis, and maternal disorders. For other conditions, notably malaria, prostate cancer, and injuries, little change was noted. Population growth, increased average age of the world's population, and largely decreasing age-specific, sex-specific, and cause-specific death rates combine to drive a broad shift from communicable, maternal, neonatal, and nutritional causes towards non-communicable diseases. Nevertheless, communicable, maternal, neonatal, and nutritional causes remain the dominant causes of YLLs in sub-Saharan Africa. Overlaid on this general pattern of the epidemiological transition, marked regional variation exists in many causes, such as interpersonal violence, suicide, liver cancer, diabetes, cirrhosis, Chagas disease, African trypanosomiasis, melanoma, and others. Regional heterogeneity highlights the importance of sound epidemiological assessments of the causes of death on a regular basis. Bill & Melinda Gates Foundation. Copyright © 2012 Elsevier Ltd. All rights reserved.

Disability-adjusted life years (DALYs) for 291 diseases and injuries in 21 regions, 1990-2010: a systematic analysis for the Global Burden of Disease Study 2010.

Christopher Murray,  Theo Vos,  Rafael Lozano … (2012)
Measuring disease and injury burden in populations requires a composite metric that captures both premature mortality and the prevalence and severity of ill-health. The 1990 Global Burden of Disease study proposed disability-adjusted life years (DALYs) to measure disease burden. No comprehensive update of disease burden worldwide incorporating a systematic reassessment of disease and injury-specific epidemiology has been done since the 1990 study. We aimed to calculate disease burden worldwide and for 21 regions for 1990, 2005, and 2010 with methods to enable meaningful comparisons over time. We calculated DALYs as the sum of years of life lost (YLLs) and years lived with disability (YLDs). DALYs were calculated for 291 causes, 20 age groups, both sexes, and for 187 countries, and aggregated to regional and global estimates of disease burden for three points in time with strictly comparable definitions and methods. YLLs were calculated from age-sex-country-time-specific estimates of mortality by cause, with death by standardised lost life expectancy at each age. YLDs were calculated as prevalence of 1160 disabling sequelae, by age, sex, and cause, and weighted by new disability weights for each health state. Neither YLLs nor YLDs were age-weighted or discounted. Uncertainty around cause-specific DALYs was calculated incorporating uncertainty in levels of all-cause mortality, cause-specific mortality, prevalence, and disability weights. Global DALYs remained stable from 1990 (2·503 billion) to 2010 (2·490 billion). Crude DALYs per 1000 decreased by 23% (472 per 1000 to 361 per 1000). An important shift has occurred in DALY composition with the contribution of deaths and disability among children (younger than 5 years of age) declining from 41% of global DALYs in 1990 to 25% in 2010. YLLs typically account for about half of disease burden in more developed regions (high-income Asia Pacific, western Europe, high-income North America, and Australasia), rising to over 80% of DALYs in sub-Saharan Africa. In 1990, 47% of DALYs worldwide were from communicable, maternal, neonatal, and nutritional disorders, 43% from non-communicable diseases, and 10% from injuries. By 2010, this had shifted to 35%, 54%, and 11%, respectively. Ischaemic heart disease was the leading cause of DALYs worldwide in 2010 (up from fourth rank in 1990, increasing by 29%), followed by lower respiratory infections (top rank in 1990; 44% decline in DALYs), stroke (fifth in 1990; 19% increase), diarrhoeal diseases (second in 1990; 51% decrease), and HIV/AIDS (33rd in 1990; 351% increase). Major depressive disorder increased from 15th to 11th rank (37% increase) and road injury from 12th to 10th rank (34% increase). Substantial heterogeneity exists in rankings of leading causes of disease burden among regions. Global disease burden has continued to shift away from communicable to non-communicable diseases and from premature death to years lived with disability. In sub-Saharan Africa, however, many communicable, maternal, neonatal, and nutritional disorders remain the dominant causes of disease burden. The rising burden from mental and behavioural disorders, musculoskeletal disorders, and diabetes will impose new challenges on health systems. Regional heterogeneity highlights the importance of understanding local burden of disease and setting goals and targets for the post-2015 agenda taking such patterns into account. Because of improved definitions, methods, and data, these results for 1990 and 2010 supersede all previously published Global Burden of Disease results. Bill & Melinda Gates Foundation. Copyright © 2012 Elsevier Ltd. All rights reserved.

I have read the journal's policy and have the following conflicts: ASB is employed by a commercial company, Inovio Pharmaceuticals. This does not alter our adherence to all PLOS NTDs policies on sharing data and materials. There are no other competing interests to declare.

The authors have indicated that no funding was received for this work.