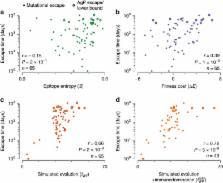 Human immunodeficiency virus (HIV) evolves within infected persons to escape being destroyed by the host immune system, thereby preventing effective immune control of infection. Here, we combine methods from evolutionary dynamics and statistical physics to simulate in vivo HIV sequence evolution, predicting the relative rate of escape and the location of escape mutations in response to T-cell-mediated immune pressure in a cohort of 17 persons with acute HIV infection. Predicted and clinically observed times to escape immune responses agree well, and we show that the mutational pathways to escape depend on the viral sequence background due to epistatic interactions. The ability to predict escape pathways and the duration over which control is maintained by specific immune responses open the door to rational design of immunotherapeutic strategies that might enable long-term control of HIV infection. Our approach enables intra-host evolution of a human pathogen to be predicted in a probabilistic framework. 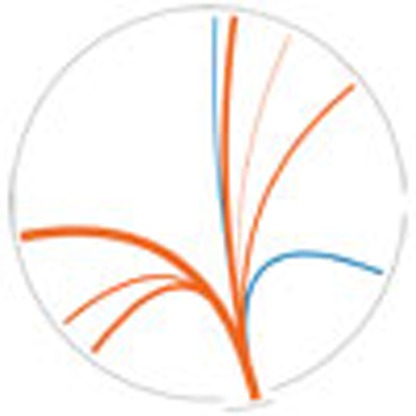 HIV evolves within infected persons to escape being destroyed by the immune system. Here, Barton et al. combine evolutionary dynamics and statistical physics to simulate this process, successfully predicting the relative rate and location of escape mutations in viral sequences for a cohort of HIV-infected persons.

Andrew J. McMichael,  Persephone Borrow,  Georgia D. Tomaras … (2009)
Key Points The early virological factors in HIV-1 infection, including transmission and the nature of the founder virus, can affect the time course of viraemia through the early peak to set point. The identification of patients within the first few weeks of HIV-1 infection has provided early evidence of immune system damage, including massive apoptosis of CD4+ T cells, which is associated with the presence of apoptotic microparticles and TRAIL (tumour necrosis factor-related apoptosis-inducing ligand) in the blood, and damage to germinal centres in mucosal lymphoid tissues. The first innate immune responses include the appearance of acute-phase proteins, early cytokine storm and activation of natural killer (NK) cells. An innate immune response to HIV-1 can be damaging, however, as it can draw susceptible T cells to the infection foci. The first T cell response controls the founder virus by killing infected T cells. However, the T cell response also selects mutational changes in the founder virus, allowing immune evasion. The first B cell response consists of early immune complexes, followed by non-neutralizing antibodies against the founder virus and then the slow development of broadly acting neutralizing antibodies. Development of vaccines that rapidly induce broadly acting neutralizing antibodies might be beneficial in preventing HIV infection. Understanding the early events and immune responses is crucial to devising vaccine strategies that can improve the weak protection offered by current HIV vaccines that are being trialled, such as the RV144 (Thai) efficacy trial.

Nilu Goonetilleke,  Michael K.P. Liu,  Jesus Salazar-Gonzalez … (2009)
Identification of the transmitted/founder virus makes possible, for the first time, a genome-wide analysis of host immune responses against the infecting HIV-1 proteome. A complete dissection was made of the primary HIV-1–specific T cell response induced in three acutely infected patients. Cellular assays, together with new algorithms which identify sites of positive selection in the virus genome, showed that primary HIV-1–specific T cells rapidly select escape mutations concurrent with falling virus load in acute infection. Kinetic analysis and mathematical modeling of virus immune escape showed that the contribution of CD8 T cell–mediated killing of productively infected cells was earlier and much greater than previously recognized and that it contributed to the initial decline of plasma virus in acute infection. After virus escape, these first T cell responses often rapidly waned, leaving or being succeeded by T cell responses to epitopes which escaped more slowly or were invariant. These latter responses are likely to be important in maintaining the already established virus set point. In addition to mutations selected by T cells, there were other selected regions that accrued mutations more gradually but were not associated with a T cell response. These included clusters of mutations in envelope that were targeted by NAbs, a few isolated sites that reverted to the consensus sequence, and bystander mutations in linkage with T cell–driven escape.

Dynamics of HIV viremia and antibody seroconversion in plasma donors: implications for diagnosis and staging of primary HIV infection.

Lorraine Peddada,  Steven Kleinman,  Lal B. Rawal … (2003)
The characterization of primary HIV infection by the analysis of serial plasma samples from newly infected persons using multiple standard viral assays. A retrospective study involving two sets of archived samples from HIV-infected plasma donors. (A) 435 samples from 51 donors detected by anti-HIV enzyme immunoassays donated during 1984-1994; (B) 145 specimens from 44 donors detected by p24 antigen screening donated during 1996-1998. Two US plasma products companies. The timepoints of appearance of HIV-1 markers and viral load concentrations during primary HIV infection. The pattern of sequential emergence of viral markers in the 'A' panels was highly consistent, allowing the definition and estimation of the duration of six sequential stages. From the 'B' panels, the viral load at p24 antigen seroconversion was estimated by regression analysis at 10 000 copies/ml (95% CI 2000-93 000) and the HIV replication rate at 0.35 log copies/ml/day, corresponding to a doubling time in the preseroconversion phase of 20.5 h (95% CI 18.2-23.4 h). Consequently, an RNA test with 50 copies/ml sensitivity would detect HIV infection approximately 7 days before a p24 antigen test, and 12 days before a sensitive anti-HIV test. The sequential emergence of assay reactivity allows the classification of primary HIV-1 infection into distinct laboratory stages, which may facilitate the diagnosis of recent infection and stratification of patients enrolled in clinical trials. Quantitative analysis of preseroconversion replication rates of HIV is useful for projecting the yield and predictive value of assays targeting primary HIV infection.