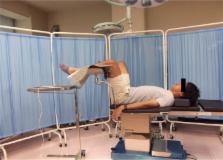 All four EPs applied to the bilateral calf regions were higher in males than in females. For all subjects, significant positive correlations were observed between all four EPs and height, weight, and BMI.

Diagnosis and management of compartmental syndromes.

F Matsen,  R Krugmire,  R Winquist (1980)
Patients at risk for compartmental syndromes challenge both the diagnostic and the therapeutic abilities of the physician. Suboptimum results may be due to delays in diagnosis and treatment, to incomplete surgical decompression, and to difficulties in the management of the limb after decompression. Although careful clinical assessment permits the diagnosis of a compartmental syndrome in most patients, we have found measurement of tissue pressure and direct nerve stimulation to be helpful for resolving ambiguous or equivocal cases. In our experience, the four-compartment parafibular approach to the leg and the ulnar approach to the volar compartments of the forearm provide efficient and complete decompression of potentially involved compartments. The skeletal stabilization of fractures associated with compartmental syndromes may facilitate management of the limb after surgical decompression.

Compartment monitoring in tibial fractures. The pressure threshold for decompression.

Asif Raza,  Derek Byrne,  Nick Townell (2003)
Well leg compartment syndrome (WLCS) is being seen more frequently as the complexity and duration of pelvic urological surgery increases, ie reconstruction/radical cancer surgery. The etiology of WLCS is multifactorial and prevention should form the mainstay of treatment. With significant morbidity and mortality, in particular lower limb morbidity secondary to fasciotomy wounds and long-term neurological sequelae, all urologists should be aware of this iatrogenic complication and how to prevent or treat it when it occurs. A retrospective review of the world literature using MEDLINE was performed from 1966 to 2002, searching for lower limb compartment syndrome (well leg compartment syndrome), and its association with the lithotomy position and pelvic surgery. Although WLCS is not commonly reported in the urological literature, it has significant morbidity and mortality. The incidence of WLCS is probably under reported due to failed diagnosis or misdiagnosis. With increased awareness the incidence of this iatrogenic complication may be minimized or avoided altogether. Because the lithotomy position is one of the most common positions used in urology, it is mandatory for urologists to be familiar with the complications associated with it. If this complication is recognized early, prompt treatment decreases morbidity and mortality. Minimizing the risk of WLCS will leave urologists less open to litigation, which may follow this significant iatrogenic complication.