Effect of prophylactic administration of antipyretics on the immune response to pneumococcal conjugate vaccines in children: a systematic review 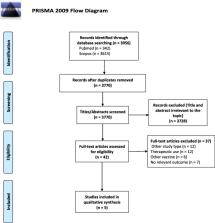 Prophylactic administration of antipyretics at the time of immunization seems to decrease some side effects, however reduced immune responses have been reported in some studies. This systematic review aimed to investigate the effect of prophylactic use of antipyretics on the immune response following administration of pneumococcal conjugate vaccines (PCVs).

A systematic review of randomized controlled trials and observational studies concerning the immune response to PCVs after antipyretic administration was performed up to November 2020 in the electronic databases of Pubmed and Scopus.

Of the 3956 citations retrieved, a total of 5 randomized control trials including 2775 children were included in the review. Included studies were referred to PCV10 (3 studies), PCV7 and PCV13 (one study each). The prophylactic administration of paracetamol decreased the immune response to certain pneumococcal serotypes in all included studies. The effect was more evident following primary vaccination and with immediate administration of paracetamol. Despite the reductions in antibody geometric mean concentrations, a robust memory response was observed following the booster dose. Besides, antibody titers remained above protective levels in 88–100% of participants. The use of ibuprofen, that was evaluated in two studies, did not seem to affect the immunogenicity of PCVs .

Although the reviewed studies had significant heterogeneity in design, paracetamol administration seems to affect the immune response for certain serotypes. The clinical significance of reduced immunogenicity especially before booster dose needs further investigation.

Matthew R. Moore,  Ruth Link-Gelles,  William Schaffner … (2015)
In 2000, seven-valent pneumococcal conjugate vaccine (PCV7) was introduced in the USA and resulted in dramatic reductions in invasive pneumococcal disease (IPD) and moderate increases in non-PCV7 type IPD. In 2010, PCV13 replaced PCV7 in the US immunisation schedule. We aimed to assess the effect of use of PCV13 in children on IPD in children and adults in the USA.

Matthew McInnes,  David Moher,  Brett D. Thombs … (2018)
Systematic reviews of diagnostic test accuracy synthesize data from primary diagnostic studies that have evaluated the accuracy of 1 or more index tests against a reference standard, provide estimates of test performance, allow comparisons of the accuracy of different tests, and facilitate the identification of sources of variability in test accuracy.

Burden of Streptococcus pneumoniae and Haemophilus influenzae type b disease in children in the era of conjugate vaccines: global, regional, and national estimates for 2000–15

Brian Wahl,  Katherine L O'Brien,  Adena Greenbaum … (2018)
Summary Background Pneumococcal conjugate vaccine (PCV) and Haemophilus influenzae type b (Hib) vaccine are now used in most countries. To monitor global and regional progress towards improving child health and to inform national policies for disease prevention and treatment, we prepared global, regional, and national disease burden estimates for these pathogens in children from 2000 to 2015. Methods Using WHO and Maternal and Child Epidemiology Estimation collaboration country-specific estimates of pneumonia and meningitis mortality and pneumonia morbidity from 2000 to 2015, we applied pneumococcal and Hib cause-specific proportions to estimate pathogen-specific deaths and cases. Summary estimates of the proportion of pneumonia deaths and cases attributable to these pathogens were derived from four Hib vaccine and six PCV efficacy and effectiveness study values. The proportion of meningitis deaths due to each pathogen was derived from bacterial meningitis aetiology and adjusted pathogen-specific meningitis case–fatality data. Pneumococcal and Hib meningitis cases were inferred from modelled pathogen-specific meningitis deaths and literature-derived case–fatality estimates. Cases of pneumococcal and Hib syndromes other than pneumonia and meningitis were estimated using the ratio of pathogen-specific non-pneumonia, non-meningitis cases to pathogen-specific meningitis cases from the literature. We accounted for annual HIV infection prevalence, access to care, and vaccine use. Findings We estimated that there were 294 000 pneumococcal deaths (uncertainty range [UR] 192 000–366 000) and 29 500 Hib deaths (18 400–40 700) in HIV-uninfected children aged 1–59 months in 2015. An additional 23 300 deaths (15 300–28 700) associated with pneumococcus and fewer than 1000 deaths associated Hib were estimated to have occurred in children infected with HIV. We estimate that pneumococcal deaths declined by 51% (7–74) and Hib deaths by 90% (78–96) from 2000 to 2015. Most children who died of pneumococcus (81%) and Hib (76%) presented with pneumonia. Less conservative assumptions result in pneumococcccal death estimates that could be as high as 515 000 deaths (302 000–609 000) in 2015. Approximately 50% of all pneumococcal deaths in 2015 occurred in four countries in Africa and Asia: India (68 700 deaths, UR 44 600–86 100), Nigeria (49 000 deaths, 32 400–59 000), the Democratic Republic of the Congo (14 500 deaths, 9300–18 700), and Pakistan (14 400 deaths, 9700–17 000]). India (15 600 deaths, 9800–21 500), Nigeria (3600 deaths, 2200–5100), China (3400 deaths, 2300–4600), and South Sudan (1000 deaths, 600–1400) had the greatest number of Hib deaths in 2015. We estimated 3·7 million episodes (UR 2·7 million–4·3 million) of severe pneumococcus and 340 000 episodes (196 000–669 000) of severe Hib globally in children in 2015. Interpretation The widespread use of Hib vaccine and the recent introduction of PCV in countries with high child mortality is associated with reductions in Hib and pneumococcal cases and deaths. Uncertainties in the burden of pneumococcal disease are largely driven by the fraction of pneumonia deaths attributable to pneumococcus. Progress towards further reducing the global burden of Hib and pneumococcal disease burden will depend on the efforts of a few large countries in Africa and Asia. Funding Bill & Melinda Gates Foundation.