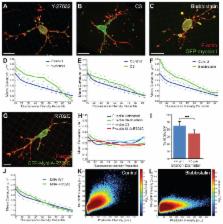 Phosphorylation and activation of myosin by Rho-associated kinase (Rho-kinase).

Megumi K. Kimura,  K Chihara,  Kori Matsuura … (1996)
The small GTPase Rho is implicated in physiological functions associated with actin-myosin filaments such as cytokinesis, cell motility, and smooth muscle contraction. We have recently identified and molecularly cloned Rho-associated serine/threonine kinase (Rho-kinase), which is activated by GTP Rho (Matsui, T., Amano, M., Yamamoto, T., Chihara, K., Nakafuku, M., Ito, M., Nakano, T., Okawa, K., Iwamatsu, A., and Kaibuchi, K. (1996) EMBO J. 15, 2208-2216). Here we found that Rho-kinase stoichiometrically phosphorylated myosin light chain (MLC). Peptide mapping and phosphoamino acid analyses revealed that the primary phosphorylation site of MLC by Rho-kinase was Ser-19, which is the site phosphorylated by MLC kinase. Rho-kinase phosphorylated recombinant MLC, whereas it failed to phosphorylate recombinant MLC, which contained Ala substituted for both Thr-18 and Ser-19. We also found that the phosphorylation of MLC by Rho-kinase resulted in the facilitation of the actin activation of myosin ATPase. Thus, it is likely that once Rho is activated, then it can interact with Rho-kinase and activate it. The activated Rho-kinase subsequently phosphorylates MLC. This may partly account for the mechanism by which Rho regulates cytokinesis, cell motility, or smooth muscle contraction.

Matthias Krause,  Alexis Gautreau (2014)
Membrane protrusions at the leading edge of cells, known as lamellipodia, drive cell migration in many normal and pathological situations. Lamellipodial protrusion is powered by actin polymerization, which is mediated by the actin-related protein 2/3 (ARP2/3)-induced nucleation of branched actin networks and the elongation of actin filaments. Recently, advances have been made in our understanding of positive and negative ARP2/3 regulators (such as the SCAR/WAVE (SCAR/WASP family verprolin-homologous protein) complex and Arpin, respectively) and of proteins that control actin branch stability (such as glial maturation factor (GMF)) or actin filament elongation (such as ENA/VASP proteins) in lamellipodium dynamics and cell migration. This Review highlights how the balance between actin filament branching and elongation, and between the positive and negative feedback loops that regulate these activities, determines lamellipodial persistence. Importantly, directional persistence, which results from lamellipodial persistence, emerges as a critical factor in steering cell migration.