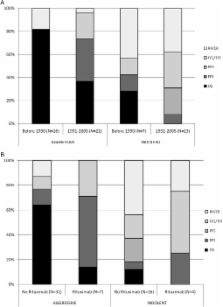 Results: Thirty-eight RCTs representing 85 treatment arms for aggressive NHL and 20 RCTs representing 42 arms for indolent NHL were included. For aggressive NHL, differences in 3-year progression-free survival (PFS)/event-free survival (EFS) were high correlated with differences in 5-year OS { r s of 0.90 [95% confidence interval (CI) 0.73–0.96]} and linear regression determined that a 10% improvement in 3-year EFS or PFS would predict for a 7% ± 1% improvement in 5-year OS. For indolent histology disease, differences in complete response were strongly correlated with differences in 3-year EFS [ r s 0.86 (95% CI 0.35–0.97)], but there was no correlation between 3-year time-to-event end points and 5-year OS.

Conclusions: Improvements in 3-year EFS/PFS are highly correlated with improvements in 5-year OS in aggressive NHL and should be explored as a candidate surrogate end point. Definition of these relationships may inform future clinical trial design and interpretation of interim trial data.

A. Lister,  Reid N. Harris,  B Coiffier … (1999)
Standardized guidelines for response assessment are needed to ensure comparability among clinical trials in non-Hodgkin's lymphomas (NHL). To achieve this, two meetings were convened among United States and international lymphoma experts representing medical hematology/oncology, radiology, radiation oncology, and pathology to review currently used response definitions and to develop a uniform set of criteria for assessing response in clinical trials. The criteria that were developed include anatomic definitions of response, with normal lymph node size after treatment of 1.5 cm in the longest transverse diameter by computer-assisted tomography scan. A designation of complete response/unconfirmed was adopted to include patients with a greater than 75% reduction in tumor size after therapy but with a residual mass, to include patients-especially those with large-cell NHL-who may not have residual disease. Single-photon emission computed tomography gallium scans are encouraged as a valuable adjunct to assessment of patients with large-cell NHL, but such scans require appropriate expertise. Flow cytometric, cytogenetic, and molecular studies are not currently included in response definitions. Response rates may be the most important objective in phase II trials where the activity of a new agent is important and may provide support for approval by regulatory agencies. However, the goals of most phase III trials are to identify therapies that will prolong the progression-free survival, if not the overall survival, of the treated patients. We hope that these guidelines will serve to improve communication among investigators and comparability among clinical trials until clinically relevant laboratory and imaging studies are identified and become more widely available.

Rituximab-CHOP versus CHOP alone or with maintenance rituximab in older patients with diffuse large B-cell lymphoma.

Randy Gascoyne,  Jason Cohn,  Bruce Woda … (2006)
To address early and late treatment failures in older patients with diffuse large B-cell lymphoma (DLBCL), we designed a two-stage randomized trial of cyclophosphamide, doxorubicin, vincristine, and prednisone (CHOP) versus rituximab plus CHOP (R-CHOP), with a second random assignment to maintenance rituximab (MR) or observation in responding patients. Untreated DLBCL patients who were 60 years or older were randomly assigned to R-CHOP (n = 318) or CHOP (n = 314); 415 responders were randomly assigned to MR (n = 207) or observation (n = 208). The primary end point was failure-free survival (FFS). All P values were two sided. Three-year FFS rate was 53% for R-CHOP patients and 46% for CHOP patients (P = .04) at a median follow-up time of 3.5 years. Two-year FFS rate from second random assignment was 76% for MR compared with 61% for observation (P = .009). No significant differences in survival were seen according to induction or maintenance therapy. FFS was prolonged with MR after CHOP (P = .0004) but not after R-CHOP (P = .81) with 2-year FFS rates from second random assignment of 77%, 79%, 74%, and 45% for R-CHOP, R-CHOP + MR, CHOP + MR, and CHOP, respectively. In a secondary analysis excluding MR patients, R-CHOP alone reduced the risks of treatment failure (P = .003) and death (P = .05) compared with CHOP alone. Rituximab administered as induction or maintenance with CHOP chemotherapy significantly prolonged FFS in older DLBCL patients. After R-CHOP, no benefit was provided by MR. These results, which are consistent with an additive effect of rituximab, suggest that future studies could focus on maintenance strategies with novel agents as well as new induction therapies.

Surrogate end points in clinical trials: are we being misled?