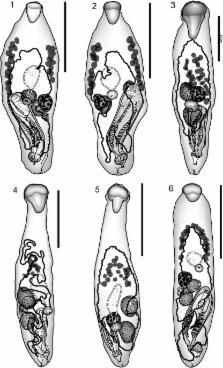 Geoff Boxshall,  František Moravec,  Jean-Paul Trilles … (2010)
Abstract: Over a 7-year period, parasites have been collected from 28 species of groupers (Serranidae, Epinephelinae) in the waters off New Caledonia. Host-parasite and parasite-host lists are provided, with a total of 337 host-parasite combinations, including 146 parasite identifications at the species level. Results are included for isopods (5 species), copepods (19), monogeneans (56), digeneans (28), cestodes (12), and nematodes (12). When results are restricted to those 14 fish species for which more than five specimens were examined and to parasites identified at the species level, 109 host-parasite combinations were recorded, with 63 different species, of which monogeneans account for half (32 species), and an average of 4.5 parasite species per fish species. Digenean records were compared for 16 fish species shared with the study of Cribb et al. (2002); based on a total of 90 parasite records identified at the species level, New Caledonia has 17 new records and only seven species were already known from other locations. We hypothesize that the present results represent only a small part of the actual biodiversity, and we predict a biodiversity of 10 different parasite species and 30 host-parasite combinations per serranid. A comparison with a study on Heron Island (Queensland, Australia) by Lester and Sewell (1989) was attempted: of the four species of fish in common and in a total of 91 host-parasite combinations, only six parasites identified at the species level were shared. This suggests strongly that insufficient sampling impairs proper biogeographical or ecological comparisons. Probably only 3% of the parasite species of coral reef fish are already known in New Caledonia.

S Rückert,  Sven Klimpel,  Heinz Mehlhorn … (2009)
Differently fed groupers Epinephelus coioides from an Indonesian finfish mariculture farm were studied for ecto- and endohelminth parasites. Pellet-fed E. coioides were infested with 13 parasite species/taxa of which six had a monoxenous and seven a heteroxenous life cycle. A total of 14 parasite species/taxa were found in the fish that were fed with different trash fish species, four of them with a monoxenous and ten with a heteroxenous life cycle. The use of pellet food significantly reduced the transfer of endohelminths and the number of parasites with a heteroxenous life cycle. Out of ten studied trash fish species, 62 parasite species were isolated (39% ectoparasitic and 61% endoparasitic), four of them also occurring in the cultured E. coioides and 14 in different groupers from Balai Budidaya Laut Lampung. The trash fish is held responsible for the transmission of these parasites into the mariculture fish. Endohelminth infestation of pellet fed fish demonstrates that parasite transfer also occurs via organisms that naturally live in, on, and in the surroundings of the net cages. Seventeen recorded invertebrates from the net cages might play an important role as intermediate hosts and hence parasite transmitters. The risk of parasite transfer can be considerably reduced by feeding selected trash fish species with a lower parasite burden, using only trash fish musculature or minimizing the abundance of invertebrates (fouling) on the net cages. These methods can control the endoparasite burden of cultivated fish without medication. The control of ectoparasites requires more elaborate techniques. Once they have succeeded in entering a mariculture farm, it is almost impossible to eliminate them from the system.

A new approach to visualize ecosystem health by using parasites.

S Rückert,  H Palm (2009)
A new approach is chosen to visualize ecosystem health by using parasite bioindicators in Segara Anakan Lagoon, a brackish water ecosystem at the southern Java coast, Indonesia. Three fish species (Mugil cephalus, Scatophagus argus, Epinephelus coioides) were collected in two different years and sampling sites and studied for ecto- and endoparasites. Additional data were taken for E. coioides from two further sites in Lampung Bay, Sumatra, and for E. fucoguttatus out of floating cages from a mariculture facility in the Thousand Islands, Jakarta Bay, North Java. The parasite fauna of fishes inside the lagoon was characterized by a high number of ecto- and a low number of endoparasites, the endoparasite diversity was relatively low and the prevalence of ectocommensalistic trichodinid ciliates was high. These parameters were chosen to indicate the biological conditions inside the lagoon. In E. coioides during rainy season, the prevalence of trichodinid ciliates was highest inside the lagoon (55%) compared with 27% in an open-net-cage mariculture and 5.7% in free-living specimens in Lampung Bay. The endoparasite diversity (Shannon-Wiener) was lowest in fish from Segara Anakan lagoon (0.66) compared with fish from an open-net-cage mariculture (0.71) and free-living specimens (1.39). Results for E. fuscoguttatus from the mariculture site in the Thousand Islands, a relatively undisturbed marine environment, demonstrated high parasite diversity (1.58) in the cultivated fish, a high number of endoparasites, and no trichodinids. A star graph is used to visualize the parasite composition for the different fishes, sampling sites, and conditions, using (1) the prevalence of trichodinid ciliates, (2) the ecto/endoparasite ratio and (3) the endoparasite diversity as bioindicators. The application of the star graph is suggested to be a suitable tool to visualize and monitor environmental health under high parasite biodiversity conditions within tropical ecosystems. It can also support a better communication to stake holders and decision makers in order to monitor environmental impact and change.