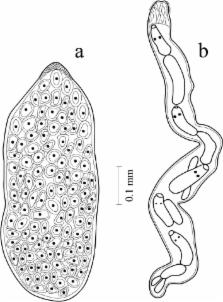 Life cycles of Dendritobilharzia loossi Skrjabin, 1924, a parasite of waterbirds, and its morphobiological traits are studied and described. Mollusks Anisus spirorbis, the infection rate of which in natural environments reaches 1.3-1.9%, were recorded as intermediate hosts under conditions of Uzbekistan. The development of this trematode in intermediate and definitive hosts lasts for 26 and 15 days, respectively. Diagnostic traits of the trematodes during all stages of their ontogeny are reviewed.

Suzanne Dufour,  J Rudolfová,  D Jouet … (2006)
The present work is a contribution to the systematics of Bilhorziello and Dendritobilharzio. Wildfowl was killed in hunting seasons or found dead in Champagne-Ardenne region, France, and autopsied with focus on schistosomes. Seven Anas plotyrhynchos (mallards), one Ardeo cinerea (grey heron) and two Cygnus olor (mute swans) were parasitized by Bilharziella. One C. olor was parasitized by Dendritobilharzia. Depending on season and hosts, various morphological forms of Bilharziello suggesting several species were observed. The differences in male and female worms concerned the morphology of genital apparatus, the spination on suckers, the body size and proportions. However, the comparison of DNA sequences led to a conclusion that these forms belonged to one species, Bilharziella polonica (Kowalewski, 1895). The morphological features and the body sizes of our samples of Dendritobilharzia seemed to differ from the type species of D. pulverulenta (Braun, 1901). Nevertheless, molecular analysis confirmed identity. We hypothesize that the differences in Bilharziella and Dendritobilharzia might be linked to internal host factors (e.g. hormonal levels), and influenced by season, host, and worm age. The definition of the genera Bilharziello and Dendritobilharzio was amended.

A review of the family Schistosomatidae: excluding the genus Schistosoma from mammals.

The occurrence of cercarial dermatitis in Central Bohemia.

V Gottwaldová,  M Sevcová,  D Cechová … (1989)
The occurrence of a dermatitis was reported from 4 natural water reservoirs in Central Bohemia (Czechoslovakia) in June and August 1985 and 1986. The clinical course of the disease was suggestive of cercarial dermatitis. Exanthema occurred most frequently under the bathing suits of afflicted persons, and on unprotected parts of their skin as well. A total of 5,865 snails (Lymnaea auricularia) were collected at the localities Nový rybník in Príbram, Spálený mlýn at Lísnice and Uhonice. Nine individuals of L. stagnalis were collected at Grado, Celákovice. Biological examination indicated cercariae of bird schistosomes (Trichobilharzia szidati) only at one locality--Spálený mlýn, Lísnice. The question of cercarial dermatitis caused by species other than schistosome cercariae, especially by Diplostomum spathaceum which was abundant at Príbram, is discussed. Repeated outbreaks of cercarial dermatitis were stopped at one locality by chemical and mechanical snail control in a swimming pool. Chemical control by chlorinated lime and copper sulfate proved insufficient in the course of the season. The mechanical control (clearing of the mud and drying of the bottom of the pool) removed infected snails, reservoirs of the disease. Suggested changes in the composition of fish fauna should also reduce excessive reproduction of snails.