Recurrent Corneal Perforation due to Chronic Graft versus Host Disease; a Clinicopathologic Report 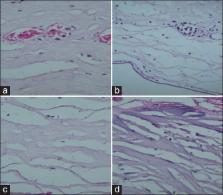 To describe a case of chronic graft versus host disease (GVHD) leading to severe dry eye and recurrent corneal perforation in both eyes, its stepwise management and histopathological reports.

A 22-year-old woman with a history of thalassemia and subsequent high-dose chemotherapy followed by allogeneic bone marrow transplant (BMT) was referred to Farabi Eye Hospital. Despite aggressive medical and surgical intervention, corneal vascularization in her right eye progressed and led to corneal perforation. Cyanoacrylate glue was applied to seal the perforation, however it recurred. Multilayer amniotic membrane transplantation (AMT) was performed to seal the corneal perforation, which was effective for a short period. Subsequently, the corneal perforation recurred and penetrating keratoplasty was performed. After a few months deep vascularization and descemetocele occurred in the fellow left eye and the patient finally underwent therapeutic lamellar keratoplasty.

Patients with GVHD are at risk of severe dry eye and subsequent corneal vascularization. Recurrent and recalcitrant corneal perforation resistant to cyanoacrylate glue and multilayer AMT may occur. Proper systemic and ocular management alongside close collaboration with the hematologist is strongly recommended to control the condition.

Y Ikeda,  Y Mashima,  K. Tsubota … (2003)
We investigated the efficacy and safety of autologous serum eye drops for the treatment of severe dry eye after allogeneic haematopoietic stem cell transplantation (SCT). A total of 14 patients (four males and 10 females; median age, 31.0 years) with severe dry eye associated with chronic graft-versus-host disease (cGVHD) were enrolled in this study. All patients were refractory to treatment with conventional artificial tears. Autologous serum eye drops, a solution made of 20% autologous serum in sterile saline, were applied 10 times per eye per day. The patients were evaluated every 4 weeks according to visual acuity, corneal sensitivity, vital staining of the ocular surface, tear dynamics, and subjective assessments of symptoms (complaints scores). The median follow-up period was 19.4 months (range: 4-41 months). After 4 weeks of treatment, significant improvement was observed in both complaint scores (from 33.7+/-12.3 to 23.6+/-10.6 points; P<0.01) and fluorescein scores (from 5.8+/-2.0 to 2.4+/-0.9 points; P<0.005). Significant improvements were observed also in rose-bengal staining and tear break-up time. In seven of the 14 patients, the responses were maintained for 6-41 months (median:19.4+/-8.3 months), while six of the other seven patients required treatment with punctal plugs in addition to autologous serum eye drops. One of these other seven patients developed eczema around the eyelids, after which the treatment was discontinued. No serious adverse events were observed. We conclude that autologous serum eye drops are safe and effective for treating severe dry eye associated with cGVHD and that more efficient control of dry eye may be achieved by the combined use of autologous serum eye drops with punctal plugs.

Michelle Hessen,  Esen K Akpek (2012)
This review was carried out to study the frequency, and severity of ocular surface involvement at the setting of allogeneic hematopoietic stem cell transplantation and subsequent graft-versus-host disease (GVHD) and evaluate the clinical outcomes of newer treatments. Ocular involvement has been reported in 60-90% of patients with chronic GVHD. Although dry eye is the most frequent finding occurring in the great majority of patients (up to 90%), posterior segment complications are also not infrequent, seen in 12.8% of patients after bone marrow transplantation. Anti-inflammatory treatments particularly T-cell suppressants seem to have a beneficial effect in managing GVHD. Corticoteroids, calcineurin inhibitors, such as cyclosporine and tacrolimus, as well as antifibrotic agents such as tranilast are available options for topical application. Cyclosporine ophthalmic drop seems to be a well tolerated and effective treatment modality; favorable results have been demonstrated with increased dosage. GVHD is an increasingly frequent cause of ocular surface morbidity with the potential of visual loss from corneal involvement. Early diagnosis and aggressive local as well as systemic treatment can be vision saving.

Arnaud C Westeneng,  Ymkje Hettinga,  Henk Lokhorst … (2010)
To determine the prevalence and manifestations of ocular graft-versus-host disease (GvHD) after allogeneic stem cell transplantation (allo-SCT). Prospective study of 101 consecutive patients who received allo-SCT from 2004 to 2007. All patients received ophthalmologic examination for 3 months after allo-SCT, and those with ocular complaints were evaluated at 12 and 24 months thereafter. We registered ophthalmologic and hematological data, including the indication for allo-SCT, occurrence of systemic and ocular GvHDs, ocular manifestations, and various ocular treatments. Over time, ocular GvHD developed in 54% of patients and consisted mainly of dry eyes and conjunctivitis, which increased in severity during follow-up; blepharitis and uveitis were less often encountered. Acute systemic GvHD, especially the involvement of mouth and skin, was strongly associated with ocular GvHD at 3 months (P = 0.000). Chronic GvHD was associated with the occurrence of ocular GvHD (P = 0.000), especially with the development of the dry eye. Although eye symptoms affecting activities of daily living were reported in 24 of 54 patients (44%) and 16 of 54 patients (30%) experienced temporary loss of visual acuity of more than 2 Snellen lines, only 1 developed permanent unilateral loss (counting fingers) because of ischemic vasculopathy. Cataract development was not encountered, and only 1 eye developed intraocular infection. Ocular GvHD develops in a substantial part of patients after allo-SCT and decreases the activities of daily living.

This is an open access article distributed under the terms of the Creative Commons Attribution NonCommercial ShareAlike 3.0 License, which allows others to remix, tweak, and build upon the work non commercially, as long as the author is credited and the new creations are licensed under the identical terms.