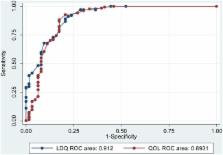 We aimed to develop and validate Kinyarwanda versions of Short-Form Leeds Dyspepsia Questionnaire (SF-LDQ) and Short-Form Nepean Dyspepsia Index (SF-NDI) to measure the frequency and severity of dyspepsia and associated quality-of-life impact in Rwanda.

Kinyarwanda versions of the SF-LDQ and SF-NDI were developed from English versions by translation, with back translation, crosschecking and pilot testing. Study participants completed these questionnaires at enrolment (time 1), and then completed the surveys again with blinded phone interviewers 3 days later (time 2). 20 randomly selected participants, diagnosed with a peptic ulcer on index endoscopy, completed a third survey by phone at day 30 (time 3), after therapy.

Internal consistency at time 1 (by Cronbach's α) and test–retest reliability between time 1 and time 2 (Spearman's correlation coefficient) for translated SF-LDQ and SF-NDI; validity versus clinical diagnosis (by receiver operating characteristic (ROC) curve) and responsiveness to treatment for SF-LDQ (by change in mean score). All outcomes were measured as per protocol.

Cronbach's α of the translated SF-LDQ was 0.93, showing high internal consistency. Spearman's correlation coefficient comparing time 1 and time 2 was 0.978 (p<0.001), demonstrating high reliability. Cronbach's α for the translated SF-NDI was 0.92. A cut-off score of 16 on the SF-LDQ showed a sensitivity of 97% and a specificity of 71% for the diagnosis of dyspepsia, correctly classifying 89% of patients. In the responsiveness analysis, the mean SF-LDQ score was reduced from 20.1 prior to treatment to 13.9 after 30 days of treatment (p=0.003).

The Kinyarwanda versions of the SF-LDQ and SF-NDI were valid, reliable and responsive to treatment.

Late-disease stage at presentation to an HIV clinic in the era of free antiretroviral therapy in Sub-Saharan Africa.

E Geng,  David R Bangsberg,  Isaac Kigozi … (2009)
Access to free antiretroviral therapy in sub-Saharan Africa has been steadily increasing, and the success of large-scale antiretroviral therapy programs depends on early initiation of HIV care. However, little is known about the stage at which those infected with HIV present for treatment in sub-Saharan Africa. We conducted a cross-sectional analysis of initial visits to the Immune Suppression Syndrome Clinic of the Mbarara University Teaching Hospital, including patients who had their initial visit between February 2007 and February 2008 (N = 2311). The median age of the patients was 33 years (range 16-81 years), and 64% were female. More than one third (40%) were categorized as late presenters, that is, World Health Organization disease stage 3 or 4. Male gender, age 46-60 years (vs. younger), lower education level, being unemployed, living in a household with others, being unmarried, and lack of spousal HIV status disclosure were independently associated with late presentation, whereas being pregnant, having young children, and consuming alcohol in the prior year were associated with early presentation. Targeted public health interventions to facilitate earlier entry into HIV care are needed, as well as additional study to determine whether late presentation is due to delays in testing vs. delays in accessing care.

V Stanghellini,  N Stace,  Carlos Haque … (1999)
There is not at present a suitable disease-specific health-related quality of life instrument for uninvestigated dyspepsia and functional (non-ulcer) dyspepsia. To develop a new multi-dimensional disease-specific instrument. The Nepean Dyspepsia Index (NDI) was designed to measure impairment of a subject's ability to engage in relevant aspects of their life and also their enjoyment of these aspects; in addition, the individual importance of each aspect is assessed. A 42-item quality of life measure was developed and tested, both in out-patients presenting to general practice with upper gastrointestinal complaints (n = 113) and in a randomly chosen population-based sample (n = 347). Adequate face and content validity was documented by an expert panel. Factor analysis identified four clinically relevant subscales: interference with activities of daily living, work, enjoyment of life and emotional well-being; lack of knowledge and control over the illness; disturbance to eating or drinking; and disturbance to sleep because of dyspepsia. These scales had high internal consistency. Both symptoms and the quality of life scores discriminated dyspepsia from health. The Nepean Dyspepsia Index is a reliable and valid disease-specific index for dyspepsia, measuring symptoms and health-related quality of life.

Functional dyspepsia impairs quality of life in the adult population.