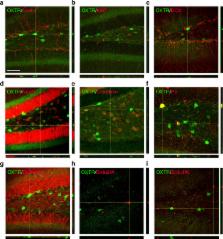 In addition to the regulation of social and emotional behaviors, the hypothalamic neuropeptide oxytocin has been shown to stimulate neurogenesis in adult dentate gyrus; however, the mechanisms underlying the action of oxytocin are still unclear. Taking advantage of the conditional knockout mouse model, we show here that endogenous oxytocin signaling functions in a non-cell autonomous manner to regulate survival and maturation of newly generated dentate granule cells in adult mouse hippocampus via oxytocin receptors expressed in CA3 pyramidal neurons. Through bidirectional chemogenetic manipulations, we also uncover a significant role for CA3 pyramidal neuron activity in regulating adult neurogenesis in the dentate gyrus. Retrograde neuronal tracing combined with immunocytochemistry revealed that the oxytocin neurons in the paraventricular nucleus project directly to the CA3 region of the hippocampus. Our findings reveal a critical role for oxytocin signaling in adult neurogenesis.

Oxytocin (OXT) has been implicated in adult neurogenesis. Here the authors show that CA3 pyramidal cells in the adult mouse hippocampus express OXT receptors and receive inputs from hypothalamic OXT neurons; activation of OXT signaling in CA3 pyramidal cells promotes the survival and maturation of newborn neurons in the dentate gyrus in a non-cell autonomous manner.

Chunmei Zhao,  Wei Deng,  Fred Gage (2008)
The generation of new neurons is sustained throughout adulthood in the mammalian brain due to the proliferation and differentiation of adult neural stem cells. In this review, we discuss the factors that regulate proliferation and fate determination of adult neural stem cells and describe recent studies concerning the integration of newborn neurons into the existing neural circuitry. We further address the potential significance of adult neurogenesis in memory, depression, and neurodegenerative disorders such as Alzheimer's and Parkinson's disease.

Unbiased stereological estimation of the total number of neurons in thesubdivisions of the rat hippocampus using the optical fractionator.

Lutz Slomianka,  Christopher West,  H J Gundersen (1991)
A stereological method for obtaining estimates of the total number of neurons in five major subdivisions of the rat hippocampus is described. The new method, the optical fractionator, combines two recent developments in stereology: a three-dimensional probe for counting neuronal nuclei, the optical disector, and a systematic uniform sampling scheme, the fractionator. The optical disector results in unbiased estimates of neuron number, i.e., estimates that are free of assumptions about neuron size and shape, are unaffected by lost caps and overprojection, and approach the true number of neurons in an unlimited manner as the number of samples is increased. The fractionator involves sampling a known fraction of a structural component. In the case of neuron number, a zero dimensional quantity, it provides estimates that are unaffected by shrinkage before, during, and after processing of the tissue. Because the fractionator involves systematic sampling, it also results in highly efficient estimates. Typically only 100-200 neurons must be counted in an animal to obtain a precision that is compatible with experimental studies. The methodology is compared with those used in earlier works involving estimates of neuron number in the rat hippocampus and a number of new stereological methods that have particular relevance to the quantitative study of the structure of the nervous system are briefly described in an appendix.

Chunmei Zhao,  E. Teng,  Robert Summers … (2006)
Adult neurogenesis in the dentate gyrus may contribute to hippocampus-dependent functions, yet little is known about when and how newborn neurons are functional because of limited information about the time course of their connectivity. By using retrovirus-mediated gene transduction, we followed the dendritic and axonal growth of adult-born neurons in the mouse dentate gyrus and identified distinct morphological stages that may indicate different levels of connectivity. Axonal projections of newborn neurons reach the CA3 area 10-11 d after viral infection, 5-6 d before the first spines are formed. Quantitative analyses show that the peak of spine growth occurs during the first 3-4 weeks, but further structural modifications of newborn neurons take place for months. Moreover, the morphological maturation is differentially affected by age and experience, as shown by comparisons between adult and postnatal brains and between housing conditions. Our study reveals the key morphological transitions of newborn granule neurons during their course of maturation.