Udenafil for the treatment of erectile dysfunction 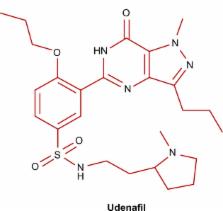 Erectile dysfunction (ED) is often perceived by both patients and sexual partners as a serious problem that can jeopardize quality of life, psychosocial or emotional well-being, and the partnership in the long term. Since their introduction, oral phosphodiesterase type 5 inhibitors (PDE5Is) have been found to be highly effective and well tolerated, and are available as the first-line therapy for the treatment of ED. Udenafil is one of the selective PDE5Is made available in recent years for the treatment of ED. Udenafil has clinical properties of both relatively rapid onset and long duration of action due to its pharmacokinetic profile, thereby providing an additional treatment option for ED men to better suit individual needs. There is positive evidence that udenafil is effective and well tolerated in the treatment of ED of a broad spectrum of etiologies or severity. Udenafil is as effective in the treatment of diabetes mellitus-associated ED as other PDE5Is. Due to the clinical property of relatively long duration of action, udenafil may be another option in daily dosing treatment for ED, as suggested by its favorable efficacy and safety profile. Most adverse effects reported from clinical trials are mild or moderate in severity, without any serious adverse event, with headache and flushing being the most common. Also, the concomitant use of anti-hypertensive drugs or alpha-1-blockers does not significantly affect the efficacy and safety profile of udenafil. However, additional studies with larger cohorts including prospective, multicenter, comparative studies with patients of different ethnicities are needed to further validate the favorable findings of udenafil in the treatment of ED.

Pharmacokinetics and metabolism of sildenafil in mouse, rat, rabbit, dog and man.

Helen Ackland,  Sean G. James,  Bruce Walker … (1999)
1. Pharmacokinetics were studied in mouse, rat, rabbit, dog and man after single intravenous and/or oral doses of sildenafil or [14C]-sildenafil (Viagra). 2. In man, absorption from the gastrointestinal tract was essentially complete. With the exception of male rat, Tmax occurred at approximately 1 h or less. Bioavailability was attenuated by pre-systemic hepatic metabolism in all species. 3. The volume of distribution was similar in rodents and humans (1-2 l/kg) but was greater in dog (5.2 l/kg), due to lower plasma protein binding (84 versus 94-96% respectively). 4. High clearance was the principal determinant of short elimination half-lives in rodents (0.4-1.3 h), whereas moderate clearance in dog and man resulted in longer half-lives (6.1 and 3.7 h respectively). Clearances were in agreement with in vitro metabolism rates by liver microsomes from the various species. 5. After single oral or intravenous doses of [14C]-sildenafil, the majority of radioactivity was excreted in the faeces of all species. No unchanged drug was detected in the excreta of man. 6. Five principal pathways of metabolism in all species were piperazine N-demethylation, pyrazole N-demethylation, loss of a two-carbon fragment from the piperazine ring (N,N'-deethylation), oxidation of the piperazine ring and aliphatic hydroxylation. Additional metabolites arose through combinations of these pathways. 7. Sildenafil was the major component detected in human plasma. Following oral doses, AUC(infinity) for the piperazine N-desmethyl and piperazine N,N'-desethyl metabolites were 55 and 27% that of parent compound respectively.