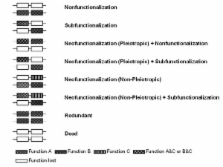 Gene duplication has been suggested to be an important process in the generation of evolutionary novelty. Neofunctionalization, as an adaptive process where one copy mutates into a function that was not present in the pre-duplication gene, is one mechanism that can lead to the retention of both copies. More recently, subfunctionalization, as a neutral process where the two copies partition the ancestral function, has been proposed as an alternative mechanism driving duplicate gene retention in organisms with small effective population sizes. The relative importance of these two processes is unclear.

A set of lattice model genes that fold and bind to two peptide ligands with overlapping binding pockets, but not a third ligand present in the cell was designed. Each gene was duplicated in a model haploid species with a small constant population size and no recombination. One set of models allowed subfunctionalization of binding events following duplication, while another set did not allow subfunctionalization. Modeling under such conditions suggests that subfunctionalization plays an important role, but as a transition state to neofunctionalization rather than as a terminal fate of duplicated genes. There is no apparent selective pressure to maintain redundancy.

The origins of genome complexity.

Michael Lynch,  John Conery (2003)
Complete genomic sequences from diverse phylogenetic lineages reveal notable increases in genome complexity from prokaryotes to multicellular eukaryotes. The changes include gradual increases in gene number, resulting from the retention of duplicate genes, and more abrupt increases in the abundance of spliceosomal introns and mobile genetic elements. We argue that many of these modifications emerged passively in response to the long-term population-size reductions that accompanied increases in organism size. According to this model, much of the restructuring of eukaryotic genomes was initiated by nonadaptive processes, and this in turn provided novel substrates for the secondary evolution of phenotypic complexity by natural selection. The enormous long-term effective population sizes of prokaryotes may impose a substantial barrier to the evolution of complex genomes and morphologies.