Primary Cilia Are Not Calcium-Responsive Mechanosensors 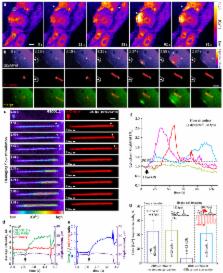 Primary cilia are solitary, generally non-motile, hair-like protrusions that extend from the surface of cells between cell divisions. Their antenna-like structure leads naturally to the assumption that they sense the surrounding environment, the most common hypothesis being sensation of mechanical force through calcium-permeable ion channels within the cilium 1 . This Ca 2+- Responsive MechanoSensor (CaRMS) hypothesis for primary cilia has been invoked to explain a large range of biological responses, from control of left-right axis determination in embryonic development to adult progression of polycystic kidney disease and some cancers 2, 3 . Here, we report the complete lack of mechanically induced calcium increases in primary cilia, in tissues upon which this hypothesis has been based. First, we developed a transgenic mouse, Arl13b-mCherry-GECO1.2, expressing a ratiometric genetically encoded calcium indicator (GECI) in all primary cilia. We then measured responses to flow in primary cilia of cultured kidney epithelial cells, kidney thick ascending tubules, crown cells of the embryonic node, kinocilia of inner ear hair cells, and several cell lines. Cilia-specific Ca 2+ influxes were not observed in physiological or even highly supraphysiological levels of fluid flow. We conclude that mechanosensation, if it originates in primary cilia, is not via calcium signaling.

Jiahui Wu,  Robert Campbell,  Yongxin Zhao … (2011)
Engineered fluorescent protein (FP) chimeras that modulate their fluorescence in response to changes in calcium ion (Ca(2+)) concentration are powerful tools for visualizing intracellular signaling activity. However, despite a decade of availability, the palette of single FP-based Ca(2+) indicators has remained limited to a single green hue. We have expanded this palette by developing blue, improved green, and red intensiometric indicators, as well as an emission ratiometric indicator with an 11,000% ratio change. This series enables improved single-color Ca(2+) imaging in neurons and transgenic Caenorhabditis elegans. In HeLa cells, Ca(2+) was imaged in three subcellular compartments, and, in conjunction with a cyan FP-yellow FP-based indicator, Ca(2+) and adenosine 5'-triphosphate were simultaneously imaged. This palette of indicators paints the way to a colorful new era of Ca(2+) imaging.