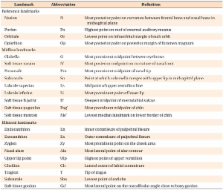 To identify the right and left difference of the facial soft tissue landmarks three-dimensionally from the subjects of normal occlusion individuals.

The right and left difference values derived from the study ranged from 0.6 to 4.6 mm indicating a high variability according to the landmarks. In general, the values showed a tendency to increase according to the lower and lateral positioning of the landmarks in the face. Overall differences were determined not only by transverse differences but also by sagittal and vertical differences, indicating that 3D evaluation would be essential in the facial soft tissue analysis.

Means and standard deviations of the right and left difference of facial soft tissue landmarks derived from this study can be used as the diagnostic standard values for the evaluation of facial asymmetry.

Maxillofacial 3-dimensional image analysis for the diagnosis of facial asymmetry.

Ned H C Hwang, Hyeon June Hwang, Moon Cheol Kang … (2006)
The advent of computed tomography has greatly reduced magnification errors from geometric distortions that are common in conventional radiographs. Recently introduced 3-dimensional (3D) software enables 3D reconstruction and quantitative measurement of the maxillofacial complex; 3D images are also useful in understanding asymmetrical structures. This article describes the use of 3D images in the diagnosis of facial asymmetry. A step-by-step procedure for 3D analysis developed by the authors is described by using the example of a 23-year-old man with a chin deviation to 1 side.

Anthropometry of the Head and Face

The prevalence of facial asymmetry in the dentofacial deformities population at the University of North Carolina.

T R Severt, William R Proffit (1996)
In a retrospective survey of 1,460 patients evaluated in the Dentofacial Clinic at the University of North Carolina, 495 (34%) were found to have clinically apparent facial asymmetry. When present, asymmetry affected the upper face in only 5% (n = 23), the midface (primarily the nose) in 36% (n = 178), and the chin in 74% (n = 365). The occlusal plane was canted, indicating vertical asymmetry, in 41% (n = 201). Patients with Class II problems, whether or not due to mandibular deficiency, had a 28% prevalence of asymmetry; those with other types of problems (e.g., Class III, long face, Class I) had a 40% prevalence, which is significantly higher than those with Class II occlusions. When the chin deviated transversely, there was an 80% chance that the deviation was to the left. Only in patients with long face was there an equal distribution of left-right chin asymmetry. In the other groups, the prevalence of deviation of the chin to the left approached 90%. These findings are meaningful for clinicians because asymmetry must be identified and planned for prior to initiating treatment.