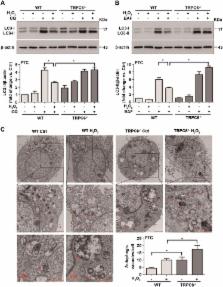 Reactive oxygen species (ROS) are generated under various pathological conditions such as renal ischemia/reperfusion (I/R) injury and provoke damage to multiple cellular organelles and processes. Overproduction of ROS causes oxidative stress and contributes to damages of renal proximal tubular cells (PTC), which are the main cause of the pathogenesis of renal I/R injury. Autophagy is a dynamic process that removes long-lived proteins and damaged organelles via lysosome-mediated degradation, which has an antioxidant effect that relieves oxidative stress. The canonical transient receptor potential channel 6 (TRPC6), a nonselective cation channel that allows passage of Ca 2+, plays an important role in renal disease. Yet, the relationship between TRPC6 and autophagy, as well as their functions in renal oxidative stress injury, remains unclear. In this study, we found that oxidative stress triggered TRPC6-dependent Ca 2+ influx in PTC to inhibit autophagy, thereby rendering cells more susceptible to death. We also demonstrated that TRPC6 knockout (TRPC6 -/-) or inhibition by SAR7334, a TRPC6-selective inhibitor, increased autophagic flux and mitigated oxidative stress-induced apoptosis of PTC. The protective effects of TRPC6 ablation were prevented by autophagy inhibitors Chloroquine and Bafilomycin A1. Moreover, this study also shows that TRPC6 blockage promotes autophagic flux via inhibiting the PI3K/Akt/mTOR and ERK1/2 signaling pathways. This is the first evidence showing that TRPC6-mediated Ca 2+ influx plays a novel role in suppressing cytoprotective autophagy triggered by oxidative stress in PTC, and it may become a novel therapeutic target for the treatment of renal oxidative stress injury in the future.

Kartik Venkatachalam,  Craig Montell,  Thomas Voets (2007)
The TRP (Transient Receptor Potential) superfamily of cation channels is remarkable in that it displays greater diversity in activation mechanisms and selectivities than any other group of ion channels. The domain organizations of some TRP proteins are also unusual, as they consist of linked channel and enzyme domains. A unifying theme in this group is that TRP proteins play critical roles in sensory physiology, which include contributions to vision, taste, olfaction, hearing, touch, and thermo- and osmosensation. In addition, TRP channels enable individual cells to sense changes in their local environment. Many TRP channels are activated by a variety of different stimuli and function as signal integrators. The TRP superfamily is divided into seven subfamilies: the five group 1 TRPs (TRPC, TRPV, TRPM, TRPN, and TRPA) and two group 2 subfamilies (TRPP and TRPML). TRP channels are important for human health as mutations in at least four TRP channels underlie disease.

Life and death partners: apoptosis, autophagy and the cross-talk between them.

S Bialik,  Chad A. Lerner,  Richard H Simon … (2009)
It is not surprising that the demise of a cell is a complex well-controlled process. Apoptosis, the first genetically programmed death process identified, has been extensively studied and its contribution to the pathogenesis of disease well documented. Yet, apoptosis does not function alone to determine a cell's fate. More recently, autophagy, a process in which de novo-formed membrane-enclosed vesicles engulf and consume cellular components, has been shown to engage in a complex interplay with apoptosis. In some cellular settings, it can serve as a cell survival pathway, suppressing apoptosis, and in others, it can lead to death itself, either in collaboration with apoptosis or as a back-up mechanism when the former is defective. The molecular regulators of both pathways are inter-connected; numerous death stimuli are capable of activating either pathway, and both pathways share several genes that are critical for their respective execution. The cross-talk between apoptosis and autophagy is therefore quite complex, and sometimes contradictory, but surely critical to the overall fate of the cell. Furthermore, the cross-talk is a key factor in the outcome of death-related pathologies such as cancer, its development and treatment.

Bruce Molitoris,  Asif A Sharfuddin (2011)
Acute kidney injury (AKI) as a consequence of ischemia is a common clinical event leading to unacceptably high morbidity and mortality, development of chronic kidney disease (CKD), and transition from pre-existing CKD to end-stage renal disease. Data indicate a close interaction between the many cell types involved in the pathophysiology of ischemic AKI, which has critical implications for the treatment of this condition. Inflammation seems to be the common factor that links the various cell types involved in this process. In this Review, we describe the interactions between these cells and their response to injury following ischemia. We relate these events to patients who are at high risk of AKI, and highlight the characteristics that might predispose these patients to injury. We also discuss how therapy targeting specific cell types can minimize the initial and subsequent injury following ischemia, thereby limiting the extent of acute changes and, hopefully, long-term structural and functional alterations to the kidney.