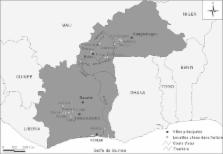 The objective of this paper was to describe recent data from Burkina Faso and Côte d’Ivoire on Human African Trypanosomosis medical monitoring in order to (i) update the disease situation in these two countries that have been sharing important migratory, economic and epidemiological links for more than a century and (ii) to define the future strategic plans to achieve the goal of a sustainable control/elimination process. Results of active and passive surveillance indicate that all sleeping sickness patients diagnosed these last years in Burkina Faso were imported cases from Côte d’Ivoire. Nevertheless the re-introduction of the parasite is effective and the risk of a resumption of transmission exists. In Côte d’Ivoire, few cases are still diagnosed in several historical foci and the fear exists that the disease could reemerge in these foci or spread to other areas. In order to achieve a sustainable elimination of sleeping sickness in these two countries, control entities have to adapt their strategy to the different epidemiological contexts. At the exception of specific cases, the current disease prevalence no longer justifies the use of expensive medical surveys by exhaustive screening of the population. New disease control strategies, based on the exchange of epidemiological information between the two countries and integrated to the regular national health systems are required to target priority intervention areas. Follow-up in time of both treated patients and serological suspects that are potential asymptomatic carriers of parasite is also important. In parallel, researchers need to better characterize the respective roles of the human and animal reservoir in the maintenance of transmission and evaluate the different control strategies taken by National Control Programs in term of cost/effectiveness to help optimize them.

Eliminating Human African Trypanosomiasis: Where Do We Stand and What Comes Next>

The Atlas of human African trypanosomiasis: a contribution to global mapping of neglected tropical diseases

Pere Simarro,  Giuliano Cecchi,  Massimo Paone … (2010)
Background Following World Health Assembly resolutions 50.36 in 1997 and 56.7 in 2003, the World Health Organization (WHO) committed itself to supporting human African trypanosomiasis (HAT)-endemic countries in their efforts to remove the disease as a public health problem. Mapping the distribution of HAT in time and space has a pivotal role to play if this objective is to be met. For this reason WHO launched the HAT Atlas initiative, jointly implemented with the Food and Agriculture Organization of the United Nations, in the framework of the Programme Against African Trypanosomosis. Results The distribution of HAT is presented for 23 out of 25 sub-Saharan countries having reported on the status of sleeping sickness in the period 2000 - 2009. For the two remaining countries, i.e. Angola and the Democratic Republic of the Congo, data processing is ongoing. Reports by National Sleeping Sickness Control Programmes (NSSCPs), Non-Governmental Organizations (NGOs) and Research Institutes were collated and the relevant epidemiological data were entered in a database, thus incorporating (i) the results of active screening of over 2.2 million people, and (ii) cases detected in health care facilities engaged in passive surveillance. A total of over 42 000 cases of HAT and 6 000 different localities were included in the database. Various sources of geographic coordinates were used to locate the villages of epidemiological interest. The resulting average mapping accuracy is estimated at 900 m. Conclusions Full involvement of NSSCPs, NGOs and Research Institutes in building the Atlas of HAT contributes to the efficiency of the mapping process and it assures both the quality of the collated information and the accuracy of the outputs. Although efforts are still needed to reduce the number of undetected and unreported cases, the comprehensive, village-level mapping of HAT control activities over a ten-year period ensures a detailed and reliable representation of the known geographic distribution of the disease. Not only does the Atlas serve research and advocacy, but, more importantly, it provides crucial evidence and a valuable tool for making informed decisions to plan and monitor the control of sleeping sickness.

The Human African Trypanosomiasis Control and Surveillance Programme of the World Health Organization 2000–2009: The Way Forward