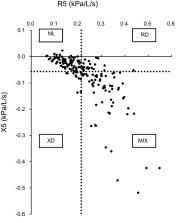 The forced oscillation technique (FOT) is a non-invasive method to measure respiratory impedance, the respiratory resistance (Rrs) and reactance (Xrs). The disease probability measure (DPM) is a useful computed tomography (CT) imaging variable for the assessment of gas trapping and emphysema in patients with chronic obstructive pulmonary disease (COPD) using pairs of inspiratory and expiratory CT images. We aimed to develop FOT-based phenotypes and determine whether the phenotypes and their imaging characteristics could facilitate the understanding of COPD pathophysiology.

FOT and spirometry were examined in 164 COPD patients and 22 non-COPD smokers. COPD patients were divided into four FOT-based phenotypes (NL, normal group; RD, resistance-dominant group; XD, reactance-dominant group; and MIX, mixed group) based on the 3rd quartile values of R5 (Rrs at 5Hz) and X5 (Xrs at 5Hz) in the non-COPD group. The emphysematous lesions and the airway lesions were quantitatively assessed in CT images by low attenuation volume and the square root of the wall area of a hypothetical airway with an internal perimeter of 10 mm (√Aaw at Pi10), respectively. DPM imaging analysis was also performed in 131 COPD patients. We investigated the differences in COPD parameters between the FOT-based phenotypes.

√Aaw at Pi10 were significantly higher in the RD, XD, and MIX groups than in the NL group. The XD group showed lower pulmonary function and higher dyspnea scores than the RD group. No significant changes in DPM values were observed between the RD and the NL groups. The gas-trapping area was significantly higher in the XD group than in the NL group. The MIX group showed the highest dyspnea score, most emphysematous lesions, and the lowest forced expiratory volume in 1 s % predicted value.

The FOT-based phenotyping may be useful to assess pathophysiological changes of COPD with CT assessments.

H Sakai,  Michiaki Mishima,  Kazuo Chin … (2000)
Chronic obstructive pulmonary disease (COPD) is characterized by the presence of airflow obstruction caused by emphysema or airway narrowing, or both. Low attenuation areas (LAA) on computed tomography (CT) have been shown to represent macroscopic or microscopic emphysema, or both. However CT has not been used to quantify the airway abnormalities in smokers with or without airflow obstruction. In this study, we used CT to evaluate both emphysema and airway wall thickening in 114 smokers. The CT measurements revealed that a decreased FEV(1) (%predicted) is associated with an increase of airway wall area and an increase of emphysema. Although both airway wall thickening and emphysema (LAA) correlated with measurements of lung function, stepwise multiple regression analysis showed that the combination of airway and emphysema measurements improved the estimate of pulmonary function test abnormalities. We conclude that both CT measurements of airway dimensions and emphysema are useful and complementary in the evaluation of the lung of smokers.