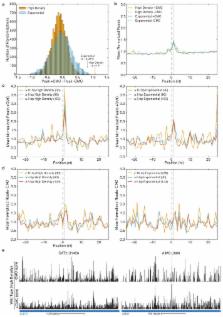 Post-transcriptional modification of RNA nucleosides occurs in all living organisms. Pseudouridine, the most abundant modified nucleoside in non-coding RNAs 1 , enhances the function of transfer RNA and ribosomal RNA by stabilizing RNA structure 2– 8 . mRNAs were not known to contain pseudouridine, but artificial pseudouridylation dramatically affects mRNA function – it changes the genetic code by facilitating non-canonical base pairing in the ribosome decoding center 9, 10 . However, without evidence of naturally occurring mRNA pseudouridylation, its physiological was unclear. Here we present a comprehensive analysis of pseudouridylation in yeast and human RNAs using Pseudo-seq, a genome-wide, single-nucleotide-resolution method for pseudouridine identification. Pseudo-seq accurately identifies known modification sites as well as 100 novel sites in non-coding RNAs, and reveals hundreds of pseudouridylated sites in mRNAs. Genetic analysis allowed us to assign most of the new modification sites to one of seven conserved pseudouridine synthases, Pus1–4, 6, 7 and 9. Notably, the majority of pseudouridines in mRNA are regulated in response to environmental signals, such as nutrient deprivation in yeast and serum starvation in human cells. These results suggest a mechanism for the rapid and regulated rewiring of the genetic code through inducible mRNA modifications. Our findings reveal unanticipated roles for pseudouridylation and provide a resource for identifying the targets of pseudouridine synthases implicated in human disease 11– 13 .

Wu Wei,  Wolfgang Huber,  Sandra Clauder-Münster … (2009)
Genome-wide pervasive transcription has been reported in many eukaryotic organisms, revealing a highly interleaved transcriptome organization that involves hundreds of previously unknown non-coding RNAs. These recently identified transcripts either exist stably in cells (stable unannotated transcripts, SUTs) or are rapidly degraded by the RNA surveillance pathway (cryptic unstable transcripts, CUTs). One characteristic of pervasive transcription is the extensive overlap of SUTs and CUTs with previously annotated features, which prompts questions regarding how these transcripts are generated, and whether they exert function. Single-gene studies have shown that transcription of SUTs and CUTs can be functional, through mechanisms involving the generated RNAs or their generation itself. So far, a complete transcriptome architecture including SUTs and CUTs has not been described in any organism. Knowledge about the position and genome-wide arrangement of these transcripts will be instrumental in understanding their function. Here we provide a comprehensive analysis of these transcripts in the context of multiple conditions, a mutant of the exosome machinery and different strain backgrounds of Saccharomyces cerevisiae. We show that both SUTs and CUTs display distinct patterns of distribution at specific locations. Most of the newly identified transcripts initiate from nucleosome-free regions (NFRs) associated with the promoters of other transcripts (mostly protein-coding genes), or from NFRs at the 3' ends of protein-coding genes. Likewise, about half of all coding transcripts initiate from NFRs associated with promoters of other transcripts. These data change our view of how a genome is transcribed, indicating that bidirectionality is an inherent feature of promoters. Such an arrangement of divergent and overlapping transcripts may provide a mechanism for local spreading of regulatory signals-that is, coupling the transcriptional regulation of neighbouring genes by means of transcriptional interference or histone modification.

Frank Jühling,  Mario Mörl,  Roland K. Hartmann … (2009)
One of the first specialized collections of nucleic acid sequences in life sciences was the ‘compilation of tRNA sequences and sequences of tRNA genes’ (http://www.trna.uni-bayreuth.de). Here, an updated and completely restructured version of this compilation is presented (http://trnadb.bioinf.uni-leipzig.de). The new database, tRNAdb, is hosted and maintained in cooperation between the universities of Leipzig, Marburg, and Strasbourg. Reimplemented as a relational database, tRNAdb will be updated periodically and is searchable in a highly flexible and user-friendly way. Currently, it contains more than 12 000 tRNA genes, classified into families according to amino acid specificity. Furthermore, the implementation of the NCBI taxonomy tree facilitates phylogeny-related queries. The database provides various services including graphical representations of tRNA secondary structures, a customizable output of aligned or un-aligned sequences with a variety of individual and combinable search criteria, as well as the construction of consensus sequences for any selected set of tRNAs.

X-linked dyskeratosis congenita is caused by mutations in a highly conserved gene with putative nucleolar functions.

Rebecca Heiss,  I Dokal,  S Wiemann … (1998)
X-linked recessive dyskeratosis congenita (DKC) is a rare bone-marrow failure disorder linked to Xq28. Hybridization screening with 28 candidate cDNAs resulted in the detection of a 3' deletion in one DKC patient with a cDNA probe (derived from XAP101). Five different missense mutations in five unrelated patients were subsequently identified in XAP101, indicating that it is the gene responsible for X-linked DKC (DKC1). DKC1 is highly conserved across species barriers and is the orthologue of rat NAP57 and Saccharomyces cerevisiae CBF5. The peptide dyskerin contains two TruB pseudouridine (psi) synthase motifs, multiple phosphorylation sites, and a carboxy-terminal lysine-rich repeat domain. By analogy to the function of the known dyskerin orthologues, involvement in the cell cycle and nucleolar function is predicted for the protein.

Correspondence and requests for materials should be addressed to W.V.G. ( wgilbert@ 123456mit.edu )