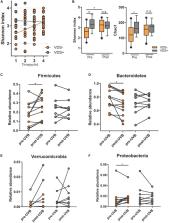 The recent worldwide rise in idiopathic immune and inflammatory diseases such as multiple sclerosis (MS) and inflammatory bowel diseases (IBD) has been linked to Western society-based changes in lifestyle and environment. These include decreased exposure to sunlight/UVB light and subsequent impairment in the production of vitamin D, as well as dysbiotic changes in the makeup of the gut microbiome. Despite their association, it is unclear if there are any direct links between UVB light and the gut microbiome. In this study we investigated whether exposing the skin to Narrow Band Ultraviolet B (NB-UVB) light to increase serum vitamin D levels would also modulate the makeup of the human intestinal microbiota. The effects of NB-UVB light were studied in a clinical pilot study using a healthy human female cohort ( n = 21). Participants were divided into those that took vitamin D supplements throughout the winter prior to the start of the study (VDS+) and those who did not (VDS−). After three NB-UVB light exposures within the same week, the serum 25(OH)D levels of participants increased on average 7.3 nmol/L. The serum response was negatively correlated to the starting 25-hydroxy vitamin D [25(OH)D] serum concentration. Fecal microbiota composition analysis using 16S rRNA sequencing showed that exposure to NB-UVB significantly increased alpha and beta diversity in the VDS− group whereas there were no changes in the VDS+ group. Bacteria from several families were enriched in the VDS− group after the UVB exposures according to a Linear Discriminant Analysis (LDA) prediction, including Lachnospiracheae, Rikenellaceae, Desulfobacteraceae, Clostridiales vadinBB60 group, Clostridia Family XIII, Coriobacteriaceae, Marinifilaceae, and Ruminococcus. The serum 25(OH)D concentrations showed a correlation with the relative abundance of the Lachnospiraceae, specifically members of the Lachnopsira and Fusicatenibacter genera. This is the first study to show that humans with low 25(OH)D serum levels display overt changes in their intestinal microbiome in response to NB-UVB skin exposure and increases in 25(OH)D levels, suggesting the existence of a novel skin-gut axis that could be used to promote intestinal homeostasis and health.

Novel role of the vitamin D receptor in maintaining the integrity of the intestinal mucosal barrier.

Rob ter Horst,  Martin Jaeger,  Sanne Smeekens … (2016)
Differences in susceptibility to immune-mediated diseases are determined by variability in immune responses. In three studies within the Human Functional Genomics Project, we assessed the effect of environmental and non-genetic host factors of the genetic make-up of the host and of the intestinal microbiome on the cytokine responses in humans. We analyzed the association of these factors with circulating mediators and with six cytokines after stimulation with 19 bacterial, fungal, viral, and non-microbial metabolic stimuli in 534 healthy subjects. In this first study, we show a strong impact of non-genetic host factors (e.g., age and gender) on cytokine production and circulating mediators. Additionally, annual seasonality is found to be an important environmental factor influencing cytokine production. Alpha-1-antitrypsin concentrations partially mediate the seasonality of cytokine responses, whereas the effect of vitamin D levels is limited. The complete dataset has been made publicly available as a comprehensive resource for future studies. PAPERCLIP.

André M. Comeau,  William K. W. Li,  Jean-Éric Tremblay … (2011)
Increasing global temperatures are having a profound impact in the Arctic, including the dramatic loss of multiyear sea ice in 2007 that has continued to the present. The majority of life in the Arctic is microbial and the consequences of climate-mediated changes on microbial marine food webs, which are responsible for biogeochemical cycling and support higher trophic levels, are unknown. We examined microbial communities over time by using high-throughput sequencing of microbial DNA collected between 2003 and 2010 from the subsurface chlorophyll maximum (SCM) layer of the Beaufort Sea (Canadian Arctic). We found that overall this layer has freshened and concentrations of nitrate, the limiting nutrient for photosynthetic production in Arctic seas, have decreased. We compared microbial communities from before and after the record September 2007 sea ice minimum and detected significant differences in communities from all three domains of life. In particular, there were significant changes in species composition of Eukarya, with ciliates becoming more common and heterotrophic marine stramenopiles (MASTs) accounting for a smaller proportion of sequences retrieved after 2007. Within the Archaea, Marine Group I Thaumarchaeota, which earlier represented up to 60% of the Archaea sequences in this layer, have declined to <10%. Bacterial communities overall were less diverse after 2007, with a significant decrease of the Bacteroidetes. These significant shifts suggest that the microbial food webs are sensitive to physical oceanographic changes such as those occurring in the Canadian Arctic over the past decade.

This article was submitted to Systems Microbiology, a section of the journal Frontiers in Microbiology