[ SWI +], the Prion Formed by the Chromatin Remodeling Factor Swi1, Is Highly Sensitive to Alterations in Hsp70 Chaperone System Activity 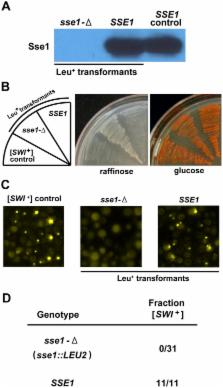 The yeast prion [ SWI +], formed of heritable amyloid aggregates of the Swi1 protein, results in a partial loss of function of the SWI/SNF chromatin-remodeling complex, required for the regulation of a diverse set of genes. Our genetic analysis revealed that [ SWI +] propagation is highly dependent upon the action of members of the Hsp70 molecular chaperone system, specifically the Hsp70 Ssa, two of its J-protein co-chaperones, Sis1 and Ydj1, and the nucleotide exchange factors of the Hsp110 family (Sse1/2). Notably, while all yeast prions tested thus far require Sis1, [ SWI +] is the only one known to require the activity of Ydj1, the most abundant J-protein in yeast. The C-terminal region of Ydj1, which contains the client protein interaction domain, is required for [ SWI +] propagation. However, Ydj1 is not unique in this regard, as another, closely related J-protein, Apj1, can substitute for it when expressed at a level approaching that of Ydj1. While dependent upon Ydj1 and Sis1 for propagation, [ SWI +] is also highly sensitive to overexpression of both J-proteins. However, this increased prion-loss requires only the highly conserved 70 amino acid J-domain, which serves to stimulate the ATPase activity of Hsp70 and thus to stabilize its interaction with client protein. Overexpression of the J-domain from Sis1, Ydj1, or Apj1 is sufficient to destabilize [ SWI +]. In addition, [ SWI +] is lost upon overexpression of Sse nucleotide exchange factors, which act to destabilize Hsp70's interaction with client proteins. Given the plethora of genes affected by the activity of the SWI/SNF chromatin-remodeling complex, it is possible that this sensitivity of [ SWI +] to the activity of Hsp70 chaperone machinery may serve a regulatory role, keeping this prion in an easily-lost, meta-stable state. Such sensitivity may provide a means to reach an optimal balance of phenotypic diversity within a cell population to better adapt to stressful environments.

Yeast prions are heritable genetic elements, formed spontaneously by aggregation of a single protein. Prions can thus generate diverse phenotypes in a dominant, non-Mendelian fashion, without a corresponding change in chromosomal gene structure. Since the phenotypes caused by the presence of a prion are thought to affect the ability of cells to survive under different environmental conditions, those that have global effects on cell physiology are of particular interest. Here we report the results of a study of one such prion, [ SWI +], formed by a component of the SWI/SNF chromatin-remodeling complex, which is required for the regulation of a diverse set of genes. We found that, compared to previously well-studied prions, [ SWI +] is highly sensitive to changes in the activities of molecular chaperones, particularly components of the Hsp70 machinery. Both under- and over-expression of components of this system initiated rapid loss of the prion from the cell population. Since expression of molecular chaperones, often known as heat shock proteins, are known to vary under diverse environmental conditions, such “chaperone sensitivity” may allow alteration of traits that under particular environmental conditions convey a selective advantage and may be a common characteristic of prions formed from proteins involved in global gene regulation.

Yeast vectors for the controlled expression of heterologous proteins in different genetic backgrounds.

Rolf Müller,  R Müller,  Ashley Funk … (1995)
An expression system for Saccharomyces cerevisiae (Sc) has been developed which, depending on the chosen vector, allows the constitutive expression of proteins at different levels over a range of three orders of magnitude and in different genetic backgrounds. The expression system is comprised of cassettes composed of a weak CYC1 promoter, the ADH promoter or the stronger TEF and GPD promoters, flanked by a cloning array and the CYC1 terminator. The multiple cloning array based on pBIISK (Stratagene) provides six to nine unique restriction sites, which facilitates the cloning of genes and allows for the directed cloning of cDNAs by the widely used ZAP system (Stratagene). Expression cassettes were placed into both the centromeric and 2 mu plasmids of the pRS series [Sikorski and Hieter, Genetics 122 (1989) 19-27; Christianson et al., Gene 110 (1992) 119-122] containing HIS3, TRP1, LEU2 or URA3 markers. The 32 expression vectors created by this strategy provide a powerful tool for the convenient cloning and the controlled expression of genes or cDNAs in nearly every genetic background of the currently used Sc strains.

A structural model for Alzheimer's beta -amyloid fibrils based on experimental constraints from solid state NMR.

Richard D. Leapman,  Galina Petkova,  John J Balbach … (2002)
We present a structural model for amyloid fibrils formed by the 40-residue beta-amyloid peptide associated with Alzheimer's disease (Abeta(1-40)), based on a set of experimental constraints from solid state NMR spectroscopy. The model additionally incorporates the cross-beta structural motif established by x-ray fiber diffraction and satisfies constraints on Abeta(1-40) fibril dimensions and mass-per-length determined from electron microscopy. Approximately the first 10 residues of Abeta(1-40) are structurally disordered in the fibrils. Residues 12-24 and 30-40 adopt beta-strand conformations and form parallel beta-sheets through intermolecular hydrogen bonding. Residues 25-29 contain a bend of the peptide backbone that brings the two beta-sheets in contact through sidechain-sidechain interactions. A single cross-beta unit is then a double-layered beta-sheet structure with a hydrophobic core and one hydrophobic face. The only charged sidechains in the core are those of D23 and K28, which form salt bridges. Fibrils with minimum mass-per-length and diameter consist of two cross-beta units with their hydrophobic faces juxtaposed.

Beverley J Glover,  S Lindquist (1998)
Hsp104 is a stress tolerance factor that promotes the reactivation of heat-damaged proteins in yeast by an unknown mechanism. Herein, we demonstrate that Hsp104 functions in this process directly. Unlike other chaperones, Hsp104 does not prevent the aggregation of denatured proteins. However, in concert with Hsp40 and Hsp70, Hsp104 can reactivate proteins that have been denatured and allowed to aggregate, substrates refractory to the action of other chaperones. Hsp104 cooperates with the chaperones present in reticulocyte lysates but not with DnaK of E. coli. We conclude that Hsp104 has a protein remodeling activity that acts on trapped, aggregated proteins and requires specific interactions with conventional chaperones to promote refolding of the intermediates it produces.

Publisher ID: 10-PLGE-RA-3977R3
DOI: 10.1371/journal.pgen.1001309
PMC ID: 3040656
PubMed ID: 21379326
Copyright statement: Hines et al. This is an open-access article distributed under the terms of the Creative Commons Attribution License, which permits unrestricted use, distribution, and reproduction in any medium, provided the original author and source are credited.