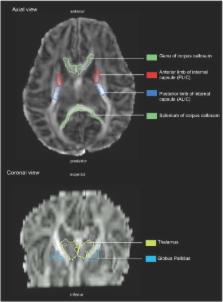 Structural brain abnormalities identified at near-term age have been recognized as potential predictors of neurodevelopment in children born preterm. The aim of this study was to examine the relationship between neonatal physiological risk factors and early brain structure in very-low-birth-weight (VLBW) preterm infants using structural MRI and diffusion tensor imaging (DTI) at near-term age.

A report: the definition and classification of cerebral palsy April 2006.

Bernard Dan,  Diane L. Damiano,  Alan Leviton … (2007)
For a variety of reasons, the definition and the classification of cerebral palsy (CP) need to be reconsidered. Modern brain imaging techniques have shed new light on the nature of the underlying brain injury and studies on the neurobiology of and pathology associated with brain development have further explored etiologic mechanisms. It is now recognized that assessing the extent of activity restriction is part of CP evaluation and that people without activity restriction should not be included in the CP rubric. Also, previous definitions have not given sufficient prominence to the non-motor neurodevelopmental disabilities of performance and behaviour that commonly accompany CP, nor to the progression of musculoskeletal difficulties that often occurs with advancing age. In order to explore this information, pertinent material was reviewed on July 11-13, 2004 at an international workshop in Bethesda, MD (USA) organized by an Executive Committee and participated in by selected leaders in the preclinical and clinical sciences. At the workshop, it was agreed that the concept 'cerebral palsy' should be retained. Suggestions were made about the content of a revised definition and classification of CP that would meet the needs of clinicians, investigators, health officials, families and the public and would provide a common language for improved communication. Panels organized by the Executive Committee used this information and additional comments from the international community to generate a report on the Definition and Classification of Cerebral Palsy, April 2006. The Executive Committee presents this report with the intent of providing a common conceptualization of CP for use by a broad international audience.

Cognitive and behavioral outcomes of school-aged children who were born preterm: a meta-analysis.

Sadaf T Bhutta,  Mary M Cradock,  Kanwaljeet Anand … (2002)
The cognitive and behavioral outcomes of school-aged children who were born preterm have been reported extensively. Many of these studies have methodological flaws that preclude an accurate estimate of the long-term outcomes of prematurity. To estimate the effect of preterm birth on cognition and behavior in school-aged children. MEDLINE search (1980 to November 2001) for English-language articles, supplemented by a manual search of personal files maintained by 2 of the authors. We included case-control studies reporting cognitive and/or behavioral data of children who were born preterm and who were evaluated after their fifth birthday if the attrition rate was less than 30%. From the 227 reviewed studies, cognitive data from 15 studies and behavioral data from 16 studies were selected. Data on population demographics, study characteristics, and cognitive and behavioral outcomes were extracted from each study, entered in a customized database, and reviewed twice to minimize error. Differences between the mean cognitive scores of cases and controls were pooled. Homogeneity across studies was formally tested using a general variance-based method and graphically using Galbraith plots. Linear meta-analysis regression models were fitted to explore the impact of birth weight and gestational age on cognitive outcomes. Study-specific relative risks (RRs) were calculated for the incidence of attention-deficit/hyperactivity disorder (ADHD) and pooled. Quality assessment of the studies was performed based on a 10-point scale. Publication bias was examined using Begg modified funnel plots and formally tested using the Egger weighted-linear regression method. Among 1556 cases and 1720 controls, controls had significantly higher cognitive scores compared with children who were born preterm (weighted mean difference, 10.9; 95% confidence interval [CI], 9.2-12.5). The mean cognitive scores of preterm-born cases and term-born controls were directly proportional to their birth weight (R(2) = 0.51; P<.001) and gestational age (R(2) = 0.49; P<.001). Age at evaluation had no significant correlation with mean difference in cognitive scores (R(2) = 0.12; P =.20). Preterm-born children showed increases in externalizing and internalizing behaviors in 81% of studies and had more than twice the RR for developing ADHD (pooled RR, 2.64; 95% CI, 1.85-3.78). No differences were noted in cognition and behaviors based on the quality of the study. Children who were born preterm are at risk for reduced cognitive test scores and their immaturity at birth is directly proportional to the mean cognitive scores at school age. Preterm-born children also show an increased incidence of ADHD and other behaviors.

Diane L. Damiano,  Murray Goldstein,  Bo Jacobsson … (2005)
Because of the availability of new knowledge about the neurobiology of developmental brain injury, information that epidemiology and modern brain imaging is providing, the availability of more precise measuring instruments of patient performance, and the increase in studies evaluating the efficacy of therapy for the consequences of injury, the need for reconsideration of the definition and classification of cerebral palsy (CP) has become evident. Pertinent material was reviewed at an international symposium participated in by selected leaders in the preclinical and clinical sciences. Suggestions were made about the content of a revised definition and classification of CP that would meet the needs of clinicians, investigators, and health officials, and provide a common language for improved communication. With leadership and direction from an Executive Committee, panels utilized this information and have generated a revised Definition and Classification of Cerebral Palsy. The Executive Committee presents this revision and welcomes substantive comments about it.

This is an open access article under the CC BY-NC-SA license (http://creativecommons.org/licenses/by-nc-sa/3.0/).