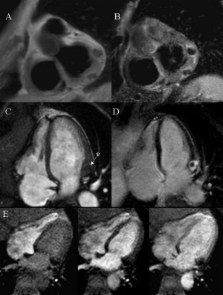 We present two cases of caseous calcification of the mitral annulus studied by Cardiovascular Magnetic Resonance; the diagnostic feature of this rare cardiac mass are described.

Caseous calcification of the mitral annulus: a neglected, unrecognized diagnosis.

Jaime Tobar, M Motro, Z Vered … (2001)
Mitral annular calcification is a common echocardiographic finding. Caseous calcification is a rare variant seen as a large mass with echolucencies that resembles a tumor, occasionally resulting in exploratory cardiotomy. The aim of this study was to assess the prevalence of caseous calcification of the mitral annulus, to evaluate patient characteristics and the echocardiographic variables for diagnosing this entity, and to describe the clinical outcome on follow-up of such patients. Caseous calcification was defined as a large, round, echo-dense mass with smooth borders situated in the periannular region, with no acoustic shadowing artifacts and containing central areas of echolucencies resembling liquefaction. Eighteen patients were diagnosed by 2-dimensional echocardiography as having caseous calcification of the mitral annulus. One had calcification of the tricuspid annulus. Nine patients underwent transesophageal echocardiographic studies. A typical finding of a round, sometimes semilunar, large, echo-dense, soft mass with central echolucencies seen on both transthoracic and in particular transesophageal echocardiography, resembling a periannular mass, was demonstrated. The mass was posteriorly located in all mitral patients. Transesophageal echocardiography added limited information. Three patients underwent mitral valve replacement. The operative findings were a solid mass adherent to the posterior portion of the mitral valve. Sectioning revealed a toothpaste-like, white, caseous material. Sixteen (84%) patients were treated conservatively. On follow-up of 3.8 +/- 2.4 years, 4 patients died of unrelated causes. The characteristic appearance of a large, soft, echo-dense mass containing central areas of echolucencies resembling liquefaction at the posterior periannular region of the mitral valve on 2D echocardiography is compatible with the diagnosis of caseous abscess. Such a finding should not be confused with a tumor. Transesophageal echocardiography does not appear to contribute to the diagnosis. This rather impressive lesion appears to carry a benign prognosis.

Olivier M Vanovermeire, Andre Duerinckx, David A Duncan … (2015)
Caseous calcification of the mitral annulus is a rare entity in cardiac imaging. We present CT and magnetic resonance imaging (MRI) in a patient evaluated for severe mitral valve regurgitation with such calcified cardiac mass in the thickened basal wall of the left ventricle. Despite good visualization of the mass both with 64-slice multidetector CT and MRI, the characterization of the lesion was difficult. The most critical finding was the presence of a hyperdense mass with an even denser peripheral rim on pre-contrast CT images. The mass did not enhance after X-ray contrast agent administration. We discuss the preoperative differential for calcified intramyocardial mass.

Cardiovascular magnetic resonance of primary tumors of the heart: A review.

Daniel Berman, David S Fieno, Louise E J Thomson … (2005)
Overall, the prevalence of primary cardiac neoplasms is approximately 0.3% and these masses should be distinguished from the myriad of other primary and secondary processes that can occur in the heart. Tumors within, attached to, or near the heart can cause direct cardiac damage, can result in thrombus formation, can compromise blood flow and can embolize distally. Hence, proper diagnosis is clinically important. It has been suggested that cardiovascular magnetic resonance (CMR) imaging is a useful tool for diagnosing and characterizing cardiac tumors. In this report, we present a case example of a patient with a large, mobile right atrial myxoma imaged by CMR with results of histopathologic analysis after excision. We also demonstrate the utilization of CMR for characterization of cardiac lesions, review the basic characteristics of primary cardiac neoplasms, provide an overview of published cases describing use of CMR, and give suggested guidelines for imaging of cardiac masses with emphasis on diagnosis of cardiac tumors. CMR is an important technique for diagnosing and characterizing cardiac tumors.