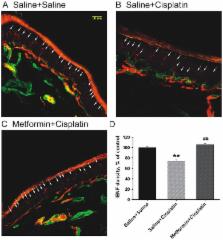 Chemotherapy-induced peripheral neuropathy (CIPN) characterized by loss of sensory sensitivity and pain in hands and feet is the major dose-limiting toxicity of many chemotherapeutics. At present, there are no FDA-approved treatments for CIPN. The anti-diabetic drug metformin is the most widely used prescription drug in the world and improves glycemic control in diabetes patients. There is some evidence that metformin enhances the efficacy of cancer treatment. The aim of this study was to test the hypothesis that metformin protects against chemotherapy-induced neuropathic pain and sensory deficits. Mice were treated with cisplatin together with metformin or saline. Cisplatin induced increased sensitivity to mechanical stimulation (mechanical allodynia) as measured using the von Frey test. Co-administration of metformin almost completely prevented the cisplatin-induced mechanical allodynia. Co-administration of metformin also prevented paclitaxel-induced mechanical allodynia. The capacity of the mice to detect an adhesive patch on their hind paw was used as a novel indicator of chemotherapy-induced sensory deficits. Co-administration of metformin prevented the cisplatin-induced increase in latency to detect the adhesive patch indicating that metformin prevents sensory deficits as well. Moreover, metformin prevented the reduction in density of intra-epidermal nerve fibers (IENFs) in the paw that develops as a result of cisplatin treatment. We conclude that metformin protects against pain and loss of tactile function in a mouse model of CIPN. The finding that metformin reduces loss of peripheral nerve endings indicates that mechanism underlying the beneficial effects of metformin includes a neuroprotective activity. Because metformin is widely used for treatment of type II diabetes, has a broad safety profile, and is currently being tested as an adjuvant drug in cancer treatment, clinical translation of these findings could be rapidly achieved.

Funda Meric-Bernstam,  Cornelia Liedtke,  Sharon H Giordano … (2009)
Population studies have suggested that metformin use in diabetic patients decreases cancer incidence and mortality. Metformin inhibits the growth of cancer cells in vitro and tumors in vivo. However, there is little clinical data to support this. Our purpose was to determine whether metformin use was associated with a change in pathologic complete response (pCR) rates in diabetic patients with breast cancer receiving neoadjuvant chemotherapy. We identified 2,529 patients who received neoadjuvant chemotherapy for early-stage breast cancer between 1990 and 2007. Patients were compared by groups: 68 diabetic patients taking metformin, 87 diabetic patients not taking metformin, and 2,374 nondiabetic patients. pCR rates were compared between the three groups using chi(2) tests of independence and compared pair- wise using a binomial test of proportions. Factors predictive of pCR were assessed using a multivariate logistic regression model. The rate of pCR was 24% in the metformin group, 8.0% in the nonmetformin group, and 16% in the nondiabetic group (P = .02). Pairwise comparisons between the metformin and nonmetformin groups (P = .007) and the nonmetformin and nondiabetic groups (P = .04) were significant. Comparison of the pCR rates between the metformin and nondiabetic groups trended toward but did not meet significance (P = .10). Metformin use was independently predictive of pCR (odds ratio, 2.95; P = .04) after adjustment for diabetes, body mass index, age, stage, grade, receptor status, and neoadjuvant taxane use. Diabetic patients with breast cancer receiving metformin and neoadjuvant chemotherapy have a higher pCR rate than do diabetics not receiving metformin. Additional studies to evaluate the potential of metformin as an antitumor agent are warranted.

Heather Hirsch,  Dimitrios Iliopoulos,  Kevin Struhl (2013)
Metformin, the first-line drug for treating diabetes, inhibits cellular transformation and selectively kills cancer stem cells in breast cancer cell lines. In a Src-inducible model of cellular transformation, metformin inhibits the earliest known step in the process, activation of the inflammatory transcription factor NF-κB. Metformin strongly delays cellular transformation in a manner similar to that occurring upon a weaker inflammatory stimulus. Conversely, inhibition of transformation does not occur if metformin is added after the initial inflammatory stimulus. The antitransformation effect of metformin can be bypassed by overexpression of Lin28B or IL1β, downstream targets of NF-κB. Metformin preferentially inhibits nuclear translocation of NF-κB and phosphorylation of STAT3 in cancer stem cells compared with non-stem cancer cells in the same population. The ability of metformin to block tumor growth and prolong remission in xenografts in combination with doxorubicin is associated with decreased function of the inflammatory feedback loop. Lastly, metformin-based combinatorial therapy is effective in xenografts involving inflammatory prostate and melanoma cell lines, whereas it is ineffective in noninflammatory cell lines from these lineages. Taken together, our observations suggest that metformin inhibits a signal transduction pathway that results in an inflammatory response. As metformin alters energy metabolism in diabetics, we speculate that metformin may block a metabolic stress response that stimulates the inflammatory pathway associated with a wide variety of cancers.

Sarah Flatters,  Gary Bennett (2006)
Paclitaxel chemotherapy frequently induces neuropathic pain during and often persisting after therapy. The mechanisms responsible for this pain are unknown. Using a rat model of paclitaxel-induced painful peripheral neuropathy, we have performed studies to search for peripheral nerve pathology. Paclitaxel-induced mechano-allodynia and mechano-hyperalgesia were evident after a short delay, peaked at day 27 and finally resolved on day 155. Paclitaxel- and vehicle-treated rats were perfused on days 7, 27 and 160. Portions of saphenous nerves were processed for electron microscopy. There was no evidence of paclitaxel-induced degeneration or regeneration as myelin structure was normal and the number/density of myelinated axons and C-fibres was unaltered by paclitaxel treatment at any time point. In addition, the prevalence of ATF3-positive dorsal root ganglia cells was normal in paclitaxel-treated animals. With one exception, at day 160 in myelinated axons, total microtubule densities were also unaffected by paclitaxel both in C-fibres and myelinated axons. C-fibres were significantly swollen following paclitaxel at days 7 and 27 compared to vehicle. The most striking finding was significant increases in the prevalence of atypical (swollen and vacuolated) mitochondria in both C-fibres (1.6- to 2.3-fold) and myelinated axons (2.4- to 2.6-fold) of paclitaxel-treated nerves at days 7 and 27. Comparable to the pain behaviour, these mitochondrial changes had resolved by day 160. Our data do not support a causal role for axonal degeneration or dysfunction of axonal microtubules in paclitaxel-induced pain. Instead, our data suggest that a paclitaxel-induced abnormality in axonal mitochondria of sensory nerves contributes to paclitaxel-induced pain.