Influence of Race, Ethnicity, and Culture on Childhood Obesity: Implications for Prevention and Treatment : A consensus statement of Shaping America's Health and the Obesity Society 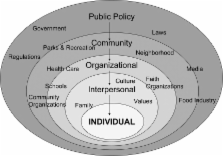 Prevalence of overweight and obesity in the United States, 1999-2004.

Expert committee recommendations regarding the prevention, assessment, and treatment of child and adolescent overweight and obesity: summary report.

John Barlow,   (2007)
To revise 1998 recommendations on childhood obesity, an Expert Committee, comprised of representatives from 15 professional organizations, appointed experienced scientists and clinicians to 3 writing groups to review the literature and recommend approaches to prevention, assessment, and treatment. Because effective strategies remain poorly defined, the writing groups used both available evidence and expert opinion to develop the recommendations. Primary care providers should universally assess children for obesity risk to improve early identification of elevated BMI, medical risks, and unhealthy eating and physical activity habits. Providers can provide obesity prevention messages for most children and suggest weight control interventions for those with excess weight. The writing groups also recommend changing office systems so that they support efforts to address the problem. BMI should be calculated and plotted at least annually, and the classification should be integrated with other information such as growth pattern, familial obesity, and medical risks to assess the child's obesity risk. For prevention, the recommendations include both specific eating and physical activity behaviors, which are likely to promote maintenance of healthy weight, but also the use of patient-centered counseling techniques such as motivational interviewing, which helps families identify their own motivation for making change. For assessment, the recommendations include methods to screen for current medical conditions and for future risks, and methods to assess diet and physical activity behaviors. For treatment, the recommendations propose 4 stages of obesity care; the first is brief counseling that can be delivered in a health care office, and subsequent stages require more time and resources. The appropriateness of higher stages is influenced by a patient's age and degree of excess weight. These recommendations recognize the importance of social and environmental change to reduce the obesity epidemic but also identify ways healthcare providers and health care systems can be part of broader efforts.

Socioeconomic status in health research: one size does not fit all.

Catherine Cubbin,  Susan Egerter,  Samuel F. Posner … (2005)
Problems with measuring socioeconomic status (SES)-frequently included in clinical and public health studies as a control variable and less frequently as the variable(s) of main interest-could affect research findings and conclusions, with implications for practice and policy. We critically examine standard SES measurement approaches, illustrating problems with examples from new analyses and the literature. For example, marked racial/ethnic differences in income at a given educational level and in wealth at a given income level raise questions about the socioeconomic comparability of individuals who are similar on education or income alone. Evidence also shows that conclusions about nonsocioeconomic causes of racial/ethnic differences in health may depend on the measure-eg, income, wealth, education, occupation, neighborhood socioeconomic characteristics, or past socioeconomic experiences-used to "control for SES," suggesting that findings from studies that have measured limited aspects of SES should be reassessed. We recommend an outcome- and social group-specific approach to SES measurement that involves (1) considering plausible explanatory pathways and mechanisms, (2) measuring as much relevant socioeconomic information as possible, (3) specifying the particular socioeconomic factors measured (rather than SES overall), and (4) systematically considering how potentially important unmeasured socioeconomic factors may affect conclusions. Better SES measures are needed in data sources, but improvements could be made by using existing information more thoughtfully and acknowledging its limitations.