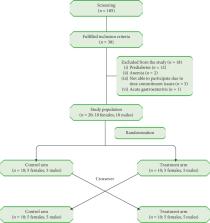 Journal: Journal of Nutrition and Metabolism

Indians have a poor protein intake in terms of quantity as well as quality because of their predominantly cereal-based diet. However, there is limited information on circulatory amino acid levels in healthy Indians. Herein, we evaluated the acute effect of a protein supplement on the plasma levels of essential amino acids (EAAs) in healthy Indian adults, using targeted EAA analysis.

In this double-blind, randomized, crossover study, 20 healthy Indian adults were randomized to receive the test protein supplement (treatment arm, n = 10) or placebo (control arm, n = 10) with milk, after overnight fasting. After 7 days, the participants returned for the crossover treatment. Blood samples were collected at baseline and at 60 and 120 min after protein/placebo consumption. Plasma EAA levels were estimated using liquid chromatography-tandem mass spectrometry. Repeated measures ANOVA was performed to assess the effect of treatment on EAA levels. P values < 0.05 were considered statistically significant.

Compared to placebo, protein supplement increased circulatory amino acid levels in healthy Indians. The observed increase in EAA levels and its role in conjunction with exercise in both healthy and diseased states need to be further evaluated. This is the first dataset exploring targeted EAA profiles and the effect of a protein supplement among healthy Indians. The clinical trial is registered with CTRI/2018/12/016777.

Body fat assessed from total body density and its estimation from skinfold thickness: measurements on 481 men and women aged from 16 to 72 years.

Muscle Protein Synthesis Measured by Stable Isotope Techniques in Man: The Effects of Feeding and Fasting