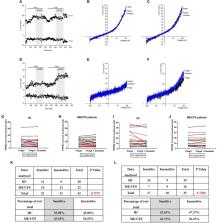 Myalgic Encephalomyelitis/Chronic Fatigue Syndrome (ME/CFS) is a seriously long-term and debilitating illness of unknown cause hallmarked by chronic pain and fatigue, memory and concentration impairment, and inflammation. ME/CFS hypothesis involves impaired Transient receptor potential melastatin 3 (TRPM3) ion channel function, affecting calcium signaling and Natural killer (NK) cell functions. Currently, substances called opioids, agonists of mu (μ)-opioid receptors (μOR), are the strongest painkillers clinically available for people suffering from strong or long-lasting pain characteristic of ME/CFS. μOR have been reported to specifically inhibit TRPM3 and to be expressed in immune cells where they play an immunomodulatory and immunosuppressive role. Naltrexone hydrochloride (NTX) acts as an antagonist to the μOR thus negating the inhibitory function of this opioid receptor on TRPM3. Therefore, understanding the mechanism of action for NTX in regulating and modulating TRPM3 channel function in NK cells will provide important information for the development of effective therapeutic interventions for ME/CFS. Whole-cell patch-clamp technique was used to measure TRPM3 activity in Interleukin-2 (IL-2) stimulated and NTX-treated NK cells for 24 h on eight ME/CFS patients and 8 age- and sex-matched healthy controls, after modulation with a TRPM3-agonist, pregnenolone sulfate (PregS), NTX and a TRPM3-antagonist, ononetin. We confirmed impaired TRPM3 function in ME/CFS patients through electrophysiological investigations in IL-2 stimulated NK cells after modulation with PregS and ononetin. Importantly, TRPM3 channel activity was restored in IL-2 stimulated NK cells isolated from ME/CFS patients after incubation for 24 h with NTX. Moreover, we demonstrated that NTX does not act as an agonist by directly coupling on the TRPM3 ion channel gating. The opioid antagonist NTX has the potential to negate the inhibitory function of opioid receptors on TRPM3 in NK cells from ME/CFS patients, resulting in calcium signals remodeling, which will in turn affect cell functions, supporting the hypothesis that NTX may have potential for use as a treatment for ME/CFS. Our results demonstrate, for the first time, and based on novel patch clamp electrophysiology, potential pharmaco-therapeutic interventions in ME/CFS.

Bernd Nilius,  Barbara Colsoul,  Maarten Gees (2010)
The 28 mammalian members of the super-family of transient receptor potential (TRP) channels are cation channels, mostly permeable to both monovalent and divalent cations, and can be subdivided into six main subfamilies: the TRPC (canonical), TRPV (vanilloid), TRPM (melastatin), TRPP (polycystin), TRPML (mucolipin), and the TRPA (ankyrin) groups. TRP channels are widely expressed in a large number of different tissues and cell types, and their biological roles appear to be equally diverse. In general, considered as polymodal cell sensors, they play a much more diverse role than anticipated. Functionally, TRP channels, when activated, cause cell depolarization, which may trigger a plethora of voltage-dependent ion channels. Upon stimulation, Ca2+ permeable TRP channels generate changes in the intracellular Ca2+ concentration, [Ca2+]i, by Ca2+ entry via the plasma membrane. However, more and more evidence is arising that TRP channels are also located in intracellular organelles and serve as intracellular Ca2+ release channels. This review focuses on three major tasks of TRP channels: (1) the function of TRP channels as Ca2+ entry channels; (2) the electrogenic actions of TRPs; and (3) TRPs as Ca2+ release channels in intracellular organelles.

Ekua W Brenu,  Mieke van Driel,  Don Staines … (2011)
Background Chronic Fatigue Syndrome/Myalgic Encephalomyelitis (CFS/ME) is characterised by severe prolonged fatigue, and decreases in cognition and other physiological functions, resulting in severe loss of quality of life, difficult clinical management and high costs to the health care system. To date there is no proven pathomechanism to satisfactorily explain this disorder. Studies have identified abnormalities in immune function but these data are inconsistent. We investigated the profile of markers of immune function (including novel markers) in CFS/ME patients. Methods We included 95 CFS/ME patients and 50 healthy controls. All participants were assessed on natural killer (NK) and CD8+T cell cytotoxic activities, Th1 and Th2 cytokine profile of CD4+T cells, expression of vasoactive intestinal peptide receptor 2 (VPACR2), levels of NK phenotypes (CD56bright and CD56dim) and regulatory T cells expressing FoxP3 transcription factor. Results Compared to healthy individuals, CFS/ME patients displayed significant increases in IL-10, IFN-γ, TNF-α, CD4+CD25+ T cells, FoxP3 and VPACR2 expression. Cytotoxic activity of NK and CD8+T cells and NK phenotypes, in particular the CD56bright NK cells were significantly decreased in CFS/ME patients. Additionally granzyme A and granzyme K expression were reduced while expression levels of perforin were significantly increased in the CFS/ME population relative to the control population. These data suggest significant dysregulation of the immune system in CFS/ME patients. Conclusions Our study found immunological abnormalities which may serve as biomarkers in CFS/ME patients with potential for an application as a diagnostic tool.