Time to Long-Acting Reversible Contraceptive Uptake Over Twelve Months Postpartum: Findings of the Yam Daabo Cluster Randomized-Controlled Trial in Burkina Faso and the Democratic Republic of the Congo 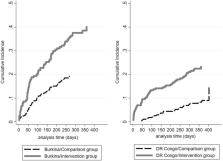 An earlier adoption of contraceptive methods during the postpartum period could help women to extend the inter-pregnancy interval. This article aimed to determine and compare the timing of long-acting reversible contraceptives (LARC) use (ie, intrauterine device and implant) in Burkina Faso (BF) and DR Congo (DRC) between the intervention and control groups.

A total of 1120 postpartum women were enrolled and followed up to 12 months postpartum. We used Yam-Daabo trial data which was a multi-intervention, single-blinded, cluster-randomised controlled trial done in primary health-care centres (clusters) in both countries. Centres were randomly allocated to receive the six-component intervention or standard antenatal and postnatal care in matched pairs (1:1). We did a secondary analysis using Royston-Parmar’s semi-parametric model to estimate the effect of the interventions on the median time of LARC uptake.

The Yam Daabo intervention package resulted in increased and earlier adoption of LARC in rural settings in Burkina Faso and urban settings in DR Congo. Such an intervention could be relevant in similar contexts in Sub-Saharan Africa with very high fertility rates and high unmet needs for contraception.

The Effect of Integrating Family Planning with a Maternal and Newborn Health Program on Postpartum Contraceptive Use and Optimal Birth Spacing in Rural Bangladesh.

Abdullah Baqui,  Saifuddin Ahmed,  Salahuddin Ahmed … (2015)
Meeting postpartum contraceptive need remains a major challenge in developing countries, where the majority of women deliver at home. Using a quasi-experimental trial design, we examine the effect of integrating family planning (FP) with a community-based maternal and newborn health (MNH) program on improving postpartum contraceptive use and reducing short birth intervals <24 months. In this two-arm trial, community health workers (CHWs) provided integrated FP counseling and services during home visits along with their outreach MNH activities in the intervention arm, but provided only MNH services in the control arm. The contraceptive prevalence rate (CPR) in the intervention arm was 15 percent higher than in the control arm at 12 months, and the difference in CPRs remained statistically significant throughout the 24 months of observation. The short birth interval of less than 24 months was significantly lower in the intervention arm. The study demonstrates that it is feasible and effective to integrate FP services into a community-based MNH care program for improving postpartum contraceptive use and lengthening birth intervals.