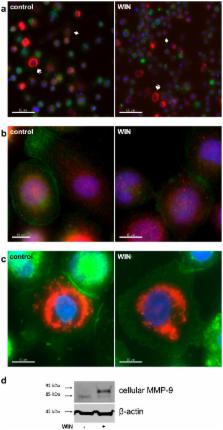 The cannabinoid system is known to be involved in the regulation of inflammatory processes. Therefore, drugs targeting cannabinoid receptors are considered as candidates for anti-inflammatory and tissue protective therapy. We demonstrated that the prototypical cannabinoid agonist R(+)WIN55,212-2 (WIN) reduced the secretion of matrix metalloproteinase-9 (MMP-9) in a murine model of cigarette-smoke induced lung inflammation. In experiments using primary cells and cell lines of the monocyte-macrophage-system we found that binding of the cannabinoid-receptor agonist WIN to a stereo-selective, specific binding site in cells of the monocyte-macrophage-system induced a significant down-regulation of MMP-9 secretion and disturbance of intracellular processing, which subsequently down-regulated MMP-9 mRNA expression via a ERK1/2-phosphorylation-dependent pathway. Surprisingly, the anti-inflammatory effect was independent from classical cannabinoid receptors. Our experiments supposed an involvement of TRPV1, but other yet unidentified sites are also possible. We conclude that cannabinoid-induced control of MMP-9 in the monocyte-macrophage system via a cannabinoid-receptor independent pathway represents a general option for tissue protection during inflammation, such as during lung inflammation and other diseases associated with inflammatory tissue damage.

Robert Visse,  Hideaki Nagase (2003)
Matrix metalloproteinases (MMPs), also designated matrixins, hydrolyze components of the extracellular matrix. These proteinases play a central role in many biological processes, such as embryogenesis, normal tissue remodeling, wound healing, and angiogenesis, and in diseases such as atheroma, arthritis, cancer, and tissue ulceration. Currently 23 MMP genes have been identified in humans, and most are multidomain proteins. This review describes the members of the matrixin family and discusses substrate specificity, domain structure and function, the activation of proMMPs, the regulation of matrixin activity by tissue inhibitors of metalloproteinases, and their pathophysiological implication.

Roles of matrix metalloproteinases in cancer progression and their pharmacological targeting.

Achilleas Theocharis,  Nikos Karamanos,  Chrisostomi Gialeli (2011)
Matrix metalloproteinases (MMPs) consist of a multigene family of zinc-dependent extracellular matrix (ECM) remodeling endopeptidases implicated in pathological processes, such as carcinogenesis. In this regard, their activity plays a pivotal role in tumor growth and the multistep processes of invasion and metastasis, including proteolytic degradation of ECM, alteration of the cell-cell and cell-ECM interactions, migration and angiogenesis. The underlying premise of the current minireview is that MMPs are able to proteolytically process substrates in the extracellular milieu and, in so doing, promote tumor progression. However, certain members of the MMP family exert contradicting roles at different stages during cancer progression, depending among other factors on the tumor stage, tumor site, enzyme localization and substrate profile. MMPs are therefore amenable to therapeutic intervention by synthetic and natural inhibitors, providing perspectives for future studies. Multiple therapeutic agents, called matrix metalloproteinase inhibitors (MMPIs) have been developed to target MMPs, attempting to control their enzymatic activity. Even though clinical trials with these compounds do not show the expected results in most cases, the field of MMPIs is ongoing. This minireview critically evaluates the role of MMPs in relation to cancer progression, and highlights the challenges, as well as future prospects, for the design, development and efficacy of MMPIs. © 2010 The Authors Journal compilation © 2010 FEBS.

Matrix metalloproteinases as modulators of inflammation and innate immunity.

Competing Interests: Nycomed GmbH is a partner of the graduate school “Research Training Group RTG 1331” ( http://cms.uni-konstanz.de/rtg1331/introduction/general-profile-of-the-rtg-group/), funded by the German Research Foundation: The Research Training Group (RTG) is based on a collaboration between the University of Konstanz (UKN) and the research-driven pharmaceutical companies Nycomed and Boehringer-Ingelheim. The research program forges a link between basic molecular cell biology and the application and validation of model systems in biomedical research. A proven track-record in this translational approach is not only given by the partners from industry, but also by professors with a strong focus on cellular test systems in pharmacology-toxicology, and is further strengthened through a collaborative center on this topic (CAAT) together with Johns-Hopkins-University in Baltimore. The core academic groups with expertise in cell biology are also members of the new Graduate School Chemical Biology (KoRS-CB) supported by the German Exzellenzinitiative. The combined experience at the interface between basic and applied pharmaceutical research generates the profile of the graduate training program.” Therefore, the role of Nycomed GmbH is to support the scientific goals of the research program within its field of expertise and to contribute to the teaching program of the graduate school. Nycomed GmbH has no commercial interest in the (freely available compound) tested in this study. Peggy Synwoldt and Andreas Pahl are employed by Nycomed Germany Holding GmbH. There are no patents, products in development or marketed products to declare. This does not alter the authors’ adherence to all the PLOS ONE policies on sharing data and materials, as detailed online in the guide for authors.

This study was supported by a grant from the DFG (DFG Graduate School 1167 and FOR521 grant UL 177/6-1). ST was member of the DFG graduate school 1167 and member of the International Research Training Group “Cell-based Characterization of Disease Mechanisms in Tissue Destruction and Repair” Konstanz/Zurich (IRTG 1331). URL: www.dfg.de. The funders had no role in study design, data collection and analysis, decision to publish, or preparation of the manuscript.