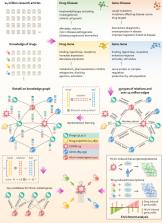 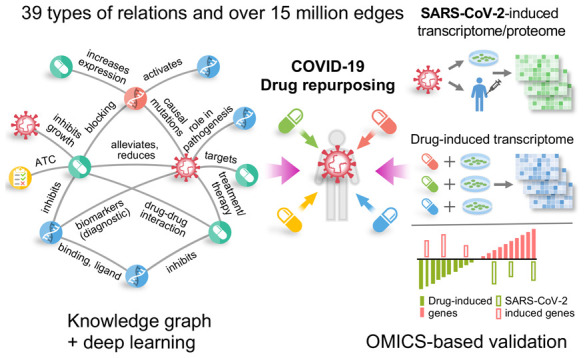 There have been more than 2.2 million confirmed cases and over 120 000 deaths from the human coronavirus disease 2019 (COVID-19) pandemic, caused by the novel severe acute respiratory syndrome coronavirus (SARS-CoV-2), in the United States alone. However, there is currently a lack of proven effective medications against COVID-19. Drug repurposing offers a promising route for the development of prevention and treatment strategies for COVID-19. This study reports an integrative, network-based deep-learning methodology to identify repurposable drugs for COVID-19 (termed CoV-KGE). Specifically, we built a comprehensive knowledge graph that includes 15 million edges across 39 types of relationships connecting drugs, diseases, proteins/genes, pathways, and expression from a large scientific corpus of 24 million PubMed publications. Using Amazon’s AWS computing resources and a network-based, deep-learning framework, we identified 41 repurposable drugs (including dexamethasone, indomethacin, niclosamide, and toremifene) whose therapeutic associations with COVID-19 were validated by transcriptomic and proteomics data in SARS-CoV-2-infected human cells and data from ongoing clinical trials. Whereas this study by no means recommends specific drugs, it demonstrates a powerful deep-learning methodology to prioritize existing drugs for further investigation, which holds the potential to accelerate therapeutic development for COVID-19.

Evaluation: from precision, recall and F-measure to ROC, informedness, markedness and correlation

Calli Lear,  Lisa Hensley,  Ritchie C Shoemaker … (2013)
Ebola viruses remain a substantial threat to both civilian and military populations as bioweapons, during sporadic outbreaks, and from the possibility of accidental importation from endemic regions by infected individuals. Currently, no approved therapeutics exist to treat or prevent infection by Ebola viruses. Therefore, we performed an in vitro screen of Food and Drug Administration (FDA)- and ex-US-approved drugs and selected molecular probes to identify drugs with antiviral activity against the type species Zaire ebolavirus (EBOV). From this screen, we identified a set of selective estrogen receptor modulators (SERMs), including clomiphene and toremifene, which act as potent inhibitors of EBOV infection. Anti-EBOV activity was confirmed for both of these SERMs in an in vivo mouse infection model. This anti-EBOV activity occurred even in the absence of detectable estrogen receptor expression, and both SERMs inhibited virus entry after internalization, suggesting that clomiphene and toremifene are not working through classical pathways associated with the estrogen receptor. Instead, the response appeared to be an off-target effect where the compounds interfere with a step late in viral entry and likely affect the triggering of fusion. These data support the screening of readily available approved drugs to identify therapeutics for the Ebola viruses and other infectious diseases. The SERM compounds described in this report are an immediately actionable class of approved drugs that can be repurposed for treatment of filovirus infections.

This article is made available via the PMC Open Access Subset for unrestricted RESEARCH re-use and analyses in any form or by any means with acknowledgement of the original source. These permissions are granted for the duration of the World Health Organization (WHO) declaration of COVID-19 as a global pandemic.