Relationship between Television Viewing and Language Delay in Toddlers: Evidence from a Korea National Cross-Sectional Survey 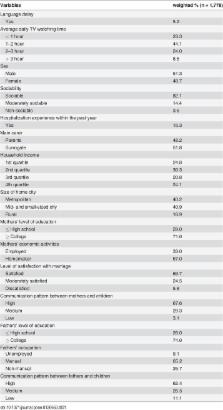 This study investigated the relationship between 2-year-old children’s exposure to TV and language delay.

The subjects of this study were 1,778 toddlers (906 males and 872 females) who participated in the Panel Study on Korean Children conducted in 2010. The linguistic ability of the toddlers was measured with the K-ASQ (Korean-Ages and Stages Questionnaire). The relationship between the amount of young children’s exposure to TV and language delay was analyzed with Poisson regression.

Associations between media viewing and language development in children under age 2 years.

Frederick J Zimmerman, Dimitri A Christakis, Andrew Meltzoff (2007)
To test the association of media exposure with language development in children under age 2 years.

Teaching by listening: the importance of adult-child conversations to language development.

Competing Interests: The authors declare that they have no competing interest.

The author(s) received no specific funding for this work.

Data Availability The data is owned by the Korea Institute of Child Care and Education (KICCE). The KICCE's data can be used with authorization of the KICCE after the submission of brief research plan and data use agreement. Please direct requests for the data to http://panel.kicce.re.kr/ (e-mail: panel@ 123456kicce.re.kr , phone: 82-02-398-7766).
ScienceOpen disciplines: Uncategorized
Data availability:
ScienceOpen disciplines: Uncategorized