A new species of Eriobotrya (Rosaceae) from Yunnan Province, China 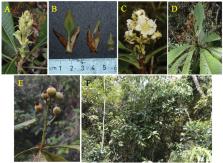 Eriobotrya laoshanica , a new species of Rosaceae from Yunnan, China, is described and illustrated. The new species is easily distinguished from the most similar species E. malipoensis K. C. Kuan by its longer petioles (2–5 vs. 0.5–1 cm); indumentum on the lower leaf surfaces (densely tomentose vs. glabrous); much fewer flowers (15- to 30-flowered vs. 50- to 100-flowered) on the panicle; larger flowers (2.5–3 vs. 1.5–2 cm in diameter); and non-angulated (vs. angulated) young fruits.

Diversification of Rosaceae since the Late Cretaceous based on plastid phylogenomics.

Shu-Dong Zhang,  Jian-Jun Jin,  Si-Yun Chen … (2017)
Phylogenetic relationships in Rosaceae have long been problematic because of frequent hybridisation, apomixis and presumed rapid radiation, and their historical diversification has not been clarified. With 87 genera representing all subfamilies and tribes of Rosaceae and six of the other eight families of Rosales (outgroups), we analysed 130 newly sequenced plastomes together with 12 from GenBank in an attempt to reconstruct deep relationships and reveal temporal diversification of this family. Our results highlight the importance of improving sequence alignment and the use of appropriate substitution models in plastid phylogenomics. Three subfamilies and 16 tribes (as previously delimited) were strongly supported as monophyletic, and their relationships were fully resolved and strongly supported at most nodes. Rosaceae were estimated to have originated during the Late Cretaceous with evidence for rapid diversification events during several geological periods. The major lineages rapidly diversified in warm and wet habits during the Late Cretaceous, and the rapid diversification of genera from the early Oligocene onwards occurred in colder and drier environments. Plastid phylogenomics offers new and important insights into deep phylogenetic relationships and the diversification history of Rosaceae. The robust phylogenetic backbone and time estimates we provide establish a framework for future comparative studies on rosaceous evolution.

Yezi Xiang,  Chien-Hsun Huang,  Yi Hu … (2016)
Fruits are the defining feature of angiosperms, likely have contributed to angiosperm successes by protecting and dispersing seeds, and provide foods to humans and other animals, with many morphological types and important ecological and agricultural implications. Rosaceae is a family with ∼3000 species and an extraordinary spectrum of distinct fruits, including fleshy peach, apple, and strawberry prized by their consumers, as well as dry achenetum and follicetum with features facilitating seed dispersal, excellent for studying fruit evolution. To address Rosaceae fruit evolution and other questions, we generated 125 new transcriptomic and genomic datasets and identified hundreds of nuclear genes to reconstruct a well-resolved Rosaceae phylogeny with highly supported monophyly of all subfamilies and tribes. Molecular clock analysis revealed an estimated age of ∼101.6 Ma for crown Rosaceae and divergence times of tribes and genera, providing a geological and climate context for fruit evolution. Phylogenomic analysis yielded strong evidence for numerous whole genome duplications (WGDs), supporting the hypothesis that the apple tribe had a WGD and revealing another one shared by fleshy fruit-bearing members of this tribe, with moderate support for WGDs in the peach tribe and other groups. Ancestral character reconstruction for fruit types supports independent origins of fleshy fruits from dry-fruit ancestors, including the evolution of drupes (e.g., peach) and pomes (e.g., apple) from follicetum, and drupetum (raspberry and blackberry) from achenetum. We propose that WGDs and environmental factors, including animals, contributed to the evolution of the many fruits in Rosaceae, which provide a foundation for understanding fruit evolution.

Expanded phylogenetic and dating analyses of the apples and their relatives (Pyreae, Rosaceae).

Eugenia Y.Y. Lo,  Michael Donoghue (2012)
Despite previous efforts to elucidate relationships within the Pyreae (Rosaceae), relationships among the major sub-lineages, generic limits, and divergence times have remained uncertain. The present study greatly expands phylogenetic analyses of the Pyreae by using a combination of 11 chloroplast regions plus nuclear ribosomal ITS sequences from 486 individuals representing 331 species and 27 genera. Maximum likelihood and bayesian analyses generally support existing generic boundary, although Sorbus, as previously circumscribed, is clearly non-monophyletic. Two significant conflicts were detected between the chloroplast and ITS phylogenies, suggesting that hybridization played a role in the origins of Micromeles and Pseudocydonia. In addition, we provide estimates of the divergence times of the major lineages. Our findings support the view that the major Pyreae lineages were established during the Eocene-Oligocene period, but that most of the modern diversity did not originate until the Miocene. At least five major, early Old World-New World disjunctions were detected and these vicariance events are generally most consistent with movement through the Beringia. Copyright Â© 2012 Elsevier Inc. All rights reserved.