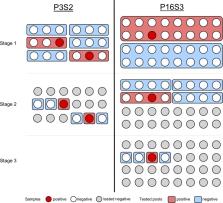 SARS-CoV-2 test kits are in critical shortage in many countries. This limits large-scale population testing and hinders the effort to identify and isolate infected individuals.

Herein, we developed and evaluated multi-stage group testing schemes that test samples in groups of various pool sizes in multiple stages. Through this approach, groups of negative samples can be eliminated with a single test, avoiding the need for individual testing and achieving considerable savings of resources.

We found that three-stage testing schemes with pool sizes of maximum 16 samples can test up to three and seven times as many individuals with the same number of test kits for prevalence rates of around 5% and 1%, respectively. We propose an adaptive approach, where the optimal testing scheme is selected based on the expected prevalence rate.

These group testing schemes could lead to a major reduction in the number of testing kits required and help improve large-scale population testing in general and in the context of the current COVID-19 pandemic.

The Detection of Defective Members of Large Populations

N Monson,  Srilatha Edupuganti,  Carlos del Rio … (2009)
The live yellow fever vaccine (YF-17D) offers a unique opportunity to study memory CD8(+) T cell differentiation in humans following an acute viral infection. We have performed a comprehensive analysis of the virus-specific CD8(+) T cell response using overlapping peptides spanning the entire viral genome. Our results showed that the YF-17D vaccine induces a broad CD8(+) T cell response targeting several epitopes within each viral protein. We identified a dominant HLA-A2-restricted epitope in the NS4B protein and used tetramers specific for this epitope to track the CD8(+) T cell response over a 2 year period. This longitudinal analysis showed the following. 1) Memory CD8(+) T cells appear to pass through an effector phase and then gradually down-regulate expression of activation markers and effector molecules. 2) This effector phase was characterized by down-regulation of CD127, Bcl-2, CCR7, and CD45RA and was followed by a substantial contraction resulting in a pool of memory T cells that re-expressed CD127, Bcl-2, and CD45RA. 3) These memory cells were polyfunctional in terms of degranulation and production of the cytokines IFN-gamma, TNF-alpha, IL-2, and MIP-1beta. 4) The YF-17D-specific memory CD8(+) T cells had a phenotype (CCR7(-)CD45RA(+)) that is typically associated with terminally differentiated cells with limited proliferative capacity (T(EMRA)). However, these cells exhibited robust proliferative potential showing that expression of CD45RA may not always associate with terminal differentiation and, in fact, may be an indicator of highly functional memory CD8(+) T cells generated after acute viral infections.