The genus Amegilla (Hymenoptera, Apidae, Anthophorini) in Australia: a revision of the subgenus Asaropoda 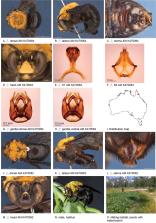 Alfried Vogler,  Anna Papadopoulou,  Ioannis Anastasiou (2010)
Phylogenetic trees in insects are frequently dated by applying a "standard" mitochondrial DNA (mtDNA) clock estimated at 2.3% My(-1), but despite its wide use reliable calibration points have been lacking. Here, we used a well-established biogeographic barrier, the mid-Aegean trench separating the western and eastern Aegean archipelago, to estimate substitution rates in tenebrionid beetles. Cytochrome oxidase I (cox1) for six codistributed genera across 28 islands (444 individuals) on both sides of the mid-Aegean trench revealed 60 independently coalescing entities delimited with a mixed Yule-coalescent model. One representative per entity was used for phylogenetic analysis of mitochondrial (cox1, 16S rRNA) and nuclear (Mp20, 28S rRNA) genes. Six nodes marked geographically congruent east-west splits whose separation was largely contemporaneous and likely to reflect the formation of the mid-Aegean trench at 9-12 Mya. Based on these "known" dates, a divergence rate of 3.54% My(-1) for the cox1 gene (2.69% when combined with the 16S rRNA gene) was obtained under the preferred partitioning scheme and substitution model selected using Bayes factors. An extensive survey suggests that discrepancies in mtDNA substitution rates in the entomological literature can be attributed to the use of different substitution models, the use of different mitochondrial gene regions, mixing of intraspecific with interspecific data, and not accounting for variance in coalescent times or postseparation gene flow. Different treatments of these factors in the literature confound estimates of mtDNA substitution rates in opposing directions and obscure lineage-specific differences in rates when comparing data from various sources.

Judson Edwards,  Hae-ock Lee (2008)
Multilocus analysis of phylogeography and population history is a powerful tool for understanding the origin, dispersal, and geographic structure of species over time and space. Using 36 genetic markers (29 newly developed anonymous nuclear loci, six introns and one from mitochondrial DNA, amounting to over 15 kb per individual), we studied population structure and demographic history of the red-backed fairy wren Malurus melanocephalus, a small passerine distributed in the northern and eastern part of Australia across the Carpentarian barrier. Analysis of anonymous loci markers revealed large amounts of genetic diversity (pi= 0.016 +/- 0.01; average number of SNPs per locus = 48; total number of SNPs = 1395), and neither nuclear nor mitochondrial gene trees showed evidence of reciprocal monophyly among Cape York (CY), Eastern Forest (EF), and Top End (TE) populations. Despite traditional taxonomy linking TE and CY populations to the exclusion of EF, we found that the CY population is genetically closer to the EF population, consistent with predicted area cladograms in this region. Multilocus coalescent analysis suggests that the CY population was separated from the other two regions approximately 0.27 million years ago, and that significant gene flow between the ER and the CY populations ( approximately 2 migrants per generation) suggests geographic continuity in eastern Australia. By contrast, gene flow between the CY and the TE populations has been dampened by divergence across the Carpentarian barrier.

Bryan C. Carstens,  L Lacey Knowles (2007)
Questions about how shifting distributions contribute to species diversification remain virtually without answer, even though rapid climate change during the Pleistocene clearly impacted genetic variation within many species. One factor that has prevented this question from being adequately addressed is the lack of precision associated with estimates of species divergence made from a single genetic locus and without incorporating processes that are biologically important as populations diverge. Analysis of DNA sequences from multiple variable loci in a coalescent framework that (i) corrects for gene divergence pre-dating speciation, and (ii) derives divergence-time estimates without making a priori assumptions about the processes underlying patterns of incomplete lineage sorting between species (i.e. allows for the possibility of gene flow during speciation), is critical to overcoming the inherent logistical and analytical difficulties of inferring the timing and mode of speciation during the dynamic Pleistocene. Estimates of species divergence that ignore these processes, use single locus data, or do both can dramatically overestimate species divergence. For example, using a coalescent approach with data from six loci, the divergence between two species of montane Melanoplus grasshoppers is estimated at between 200,000 and 300,000 years before present, far more recently than divergence estimates made using single-locus data or without the incorporation of population-level processes. Melanoplus grasshoppers radiated in the sky islands of the Rocky Mountains, and the analysis of divergence between these species suggests that the isolation of populations in multiple glacial refugia was an important factor in promoting speciation. Furthermore, the low estimates of gene flow between the species indicate that reproductive isolation must have evolved rapidly for the incipient species boundaries to be maintained through the subsequent glacial periods and shifts in species distributions.