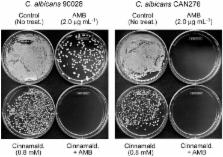 In addition to the fungal cellular membrane, the cellular antioxidant system can also be a viable target in the antifungal action of amphotericin B (AMB). Co-application of certain redox-potent natural compounds with AMB actually increases efficacy of the drug through chemosensitization. Some redox-potent chemosensitizers and AMB perturb common cellular targets, resulting in synergistic inhibition of fungal growth. Chemosensitizing activities of four redox-potent benzaldehydes were tested against clinical and reference strains of Candida albicans, C. krusei, C. tropicalis, and Cryptococcus neoformans in combination with AMB, based on assays outlined by the European Committee on Antimicrobial Susceptibility Testing. Two dihydroxybenzaldehydes (DHBAs), i.e., 2,3-DHBA and 2,5-DHBA, significantly enhanced activity of AMB against most strains, as measured by lower minimum inhibitory concentrations and/or minimum fungicidal concentrations (MFCs). A non-hydroxylated benzaldehyde, trans-cinnamaldehyde, showed chemosensitizing activity through lower MFCs, only. Contrastingly, a methoxylated benzaldehyde (3,5-dimethoxybenzaldehyde) had no chemosensitizing activity, as all strains were hypertolerant to this compound. Bioassays using deletion mutants of the model yeast, Saccharomyces cerevisiae, indicated DHBAs exerted their chemosensitizing activity by targeting mitochondrial superoxide dismutase. This targeting, in turn, disrupted the ability of the yeast strains to respond to AMB-induced oxidative stress. These in vitro results indicate that certain DHBAs are potent chemosensitizing agents to AMB through co-disruption of the oxidative stress response capacity of yeasts. Such redox-potent compounds show promise for enhancing AMB-based antifungal therapy for candidiasis and cryptococcosis.

Y Garin,  M. Toledano,  Tim Spector … (1999)
Yap1 and Skn7 are two yeast transcriptional regulators that co-operate to activate thioredoxin (TRX2) and thioredoxin reductase (TRR1) in response to redox stress signals. Although they are both important for resistance to H2O2, only Yap1 is important for cadmium resistance, whereas Skn7 has a negative effect upon this response. The respective roles of Yap1 and Skn7 in the induction of defense genes by H2O2 were analyzed by two-dimensional gel electrophoresis. Yap1 controls a large oxidative stress response regulon of at least 32 proteins. Fifteen of these proteins also require the presence of Skn7 for their induction by H2O2. Although about half of the Yap1 target genes do not contain a consensus Yap1 recognition motif, the control of one such gene, TSA1, involves the binding of Yap1 and Skn7 to its promoter in vitro. The co-operative control of the oxidative stress response by Yap1 and Skn7 delineates two gene subsets. Remarkably, these two gene subsets separate antioxidant scavenging enzymes from the metabolic pathways regenerating the main cellular reducing power, glutathione and NADPH. Such a specialization may explain, at least in part, the dissociated function of Yap1 and Skn7 in H2O2 and cadmium resistance.

J C Pousada,  K Struhl,  Daryl L. Fernandes … (1997)
Saccharomyces cerevisiae contains eight members of a novel and fungus-specific family of bZIP proteins that is defined by four atypical residues on the DNA-binding surface. Two of these proteins, Yap1 and Yap2, are transcriptional activators involved in pleiotropic drug resistance. Although initially described as AP-1 factors, at least four Yap proteins bind most efficiently to TTACTAA, a sequence that differs at position +/-2 from the optimal AP-1 site (TGACTCA); further, a Yap-like derivative of the AP-1 factor Gcn4 (A239Q S242F) binds efficiently to the Yap recognition sequence. Molecular modeling suggests that the Yap-specific residues make novel contacts and cause physical constraints at the +/-2 position that may account for the distinct DNA-binding specificities of Yap and AP-1 proteins. To various extents, Yap1, Yap2, Yap3, and Yap5 activate transcription from a promoter containing a Yap recognition site. Yap-dependent transcription is abolished in strains containing high levels of protein kinase A; in contrast, Gcn4 transcriptional activity is stimulated by protein kinase A. Interestingly, Yap1 transcriptional activity is stimulated by hydrogen peroxide, whereas Yap2 activity is stimulated by aminotriazole and cadmium. In addition, unlike other yap mutations tested, yap4 (cin5) mutations affect chromosome stability, and they suppress the cold-sensitive phenotype of yap1 mutant strains. Thus, members of the Yap family carry out overlapping but distinct biological functions.

L Sokol,  J Brajtburg,  G Medoff (1986)
Amphotericin B (AmB) is known to bind to ergosterol in fungal cell membranes, but the precise mechanism of its toxicity to cells is as yet poorly understood. AmB autooxidizes, and it is possible that its antifungal effects could result from oxidative damage. Exposure of protoplasts of Candida albicans to AmB under hypoxic conditions reduced protoplast lysis by as much as 80% compared with incubations in air. Protoplasts were protected from AmB-induced lysis by exogenous catalase and/or superoxide dismutase (SOD). Whole cells of C. albicans were protected by exogenous catalase from AmB-induced leakage of [3H]leucine and from killing by AmB. Cells grown on medium inducing high levels of endogenous catalase were resistant to AmB-induced growth inhibition. In contrast, AmB-induced K+ leakage was not hindered under hypoxic conditions or in the presence of catalase or SOD. Thus the lethal and lytic effects of AmB on C. albicans cells and protoplasts, but not prelethal AmB-induced K+ leakage, are mediated by oxidative damage.

This article was submitted to Frontiers in Antimicrobials, Resistance and Chemotherapy, a specialty of Frontiers in Microbiology.