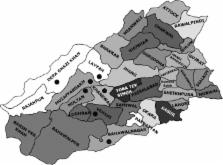 Babesiosis is a parasitic infection due to the multiplication of tick borne parasite, Babesia sp., in erythrocytes of host, which includes a wide variety of vertebrates including small ruminants causing decreased livestock output and hence economic losses. The objective of the present study was to establish a PCR based method for the detection of Babesia sp. in small ruminant population in Southern Punjab and to determine the risk factors involve in the spread of babesiosis. A total of 107 blood samples were collected from 40 sheep and 67 goats in seven districts of Southern Punjab from randomly selected herds. Data on the characteristics of the animals and the herd were collected through questionnaires. 36 blood samples (34% of total) produced the DNA fragment specific for 18S rRNA gene of Babesia sp., by PCR amplification, of which 20 were sheep and 16 were goats. Samples from all seven district contained Babesia positive samples and prevalence varied between 18 to 68%. It was observed that male animals (P = 0.009) and young animals under one year of age (P = 0.01) were more prone to the parasite. It was observed that herds consist of more than 15 animals (P = 0.007), composed of mixed species of small ruminants (P = 0.022), associated with dogs (P = 0.003) and dogs having ticks on their bodies (P = 0.011) were among the major risk factors for the spread of babesiosis in small ruminants.

J M Carretero,  A Buling-Saraña,  A Zandueta-Criado … (2003)
Molecular epizootiology of piroplasmids (Babesia spp., Theileria spp.) and Hepatozoon canis was studied in mammals from southern Europe (mainly from Spain, but also from Portugal and France). Partial amplification and sequencing of the 18s rRNA gene was used for molecular diagnosis. In some particular cases (B. ovis and B. bovis) the complete 18s rRNA gene was sequenced. Blood samples were taken from domestic animals showing clinical symptoms: 10 dogs, 10 horses, 10 cows, 9 sheep and 1 goat. In addition, DNA samples were isolated from blood of 12 healthy dogs and from spleen of 10 wild red foxes (Vulpes vulpes). The results of the survey were the following: Piroplasmid infections: Approximately from 50 to 70% of wild or domestic mammals (symptomatic) were infected. Piroplasmids detected in ruminants were:COW: B. bovis, T. annulata and Theileria sp. (type C). Sheep and goat: B. ovis. Piroplasmids present in canids were: Babesia canis vogeli, Babesia canis canis, Theileria annae and B. equi. The only piroplasmid found in asymptomatic dogs was B. equi. Piroplasmids found in horse were: B. equi and B. canis canis.H. canis infections in canids: H. canis was absent of domestic dog samples, whereas all foxes studied were infected by this protozoa. Genetic analysis showed that most of piroplasmid and Hepatozoon isolates from southern Europe matched unambigously with previously described species, as demonstrated by the high level sequence identity between them, usually between 99 and 100%. Minor differences, usually detected in hypervariable regions of 18s rRNA gene are probably due to strain variations or rare genetic polymorphisms. A possible exception was B. bovis, which shows a relatively lower degree of homology (94%) with regard to other B. bovis isolates from several countries. The same is true for B. ovis, that showed a 94% identity with regard to Babesia sp. from South African cow and a 92% with rapport to B. bovis from Portugal.

Identification, genetic diversity and prevalence of Theileria and Babesia species in a sheep population from Northern Spain.

Josune García-Sanmartín,  Daniel Nagore,  R Juste … (2004)
The genetic diversity and prevalence of virtually all Theileria and Babesia species in a sheep population were studied using a specifically designed reverse line blot macroarray. The amplified hypervariable V4 region of the 18S rRNA gene was hybridised against generic and species-specific probes. In a first screening (Study I), 320 apparently healthy animals corresponding to 32 flocks located in the Basque Country (Northern Spain) were analysed. The survey demonstrated a high prevalence of subclinical infections (64.7%). Three Theileria genotypes were identified, sharing 96.7-97.0% similarity between their 18S rRNA gene sequences: Theileria ovis, Theileria sp. OT1 (99.6% similarity with the recently described pathogenic piroplasm Theileria sp. China 1), and Theileria sp. OT3. Two Babesia species sharing 91.5% similarity were also detected: Babesia ovis and Babesia motasi. The complete 18S rRNA gene sequences of these and other piroplasm species were phylogenetically analysed. Prevalence of piroplasms was also investigated in a second group of 80 sheep from 16 flocks reared in mountain areas that had been heavily exposed to ticks and had suffered a recent abortion episode (Study II). The screening revealed a significantly higher (P < 0.05) prevalence (78.7%) of piroplasm infections compared to Study I. Although the prevalence rates for some piroplasm species were significantly related to abortion (e.g. Theileria sp. OT3), decreases in the red cell parameters were not significant. The widespread distribution of Theileria spp. in the studied sheep population suggests that the parasites involved are of relatively low pathogenicity, in contrast to what has been reported for Theileria sp. China 1 in other countries.