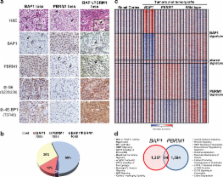 Susan A. Fuhrman,  Larry C Lasky,  Catherine Limas (1982)
The prognostic significance of morphologic parameters was evaluated in 103 patients with renal cell carcinoma diagnosed during 1961--1974. Pathologic material was classified as to pathologic stage, tumor size, cell arrangement, cell type and nuclear grade. Four nuclear grades (1--4) were defined in order of increasing nuclear size, irregularity and nucleolar prominence. Nuclear grade was more effective than each of the other parameters in predicting development of distant metastasis following nephrectomy. Among 45 patients who presented in Stage I, tumors classified as nuclear grade 1 did not metastasize for at least 5 years, whereas 50% of the higher grade tumors did so. Moreover, among Stage I tumors there was a significant difference in subsequent metastatic rate between nuclear grades 1 and 2. There was an apparent positive relationship between cell type and metastatic rate; clear cell tumors were less aggressive than predominantly granular cell tumors (metastatic rate 38% versus 71%). This relationship in part a function of the nuclear grade: only 5% of grade 3 and 4 tumors consisted of clear cells, whereas such high grades were seen in 57% of granular cell tumors. The size of the primary correlated well with the stage at the time of surgery. However, with the exception of extremely large and small tumors, the size was not useful in predicting the subsequent course of patients treated for Stage I tumors. Nuclear grade was the most significant prognostic criterion for the outcome of Stage I renal cell carcinoma.

Mutations of the VHL tumour suppressor gene in renal carcinoma.

Xun Xu,  Yong Hou,  Xuyang Yin … (2012)
Clear cell renal cell carcinoma (ccRCC) is the most common kidney cancer and has very few mutations that are shared between different patients. To better understand the intratumoral genetics underlying mutations of ccRCC, we carried out single-cell exome sequencing on a ccRCC tumor and its adjacent kidney tissue. Our data indicate that this tumor was unlikely to have resulted from mutations in VHL and PBRM1. Quantitative population genetic analysis indicates that the tumor did not contain any significant clonal subpopulations and also showed that mutations that had different allele frequencies within the population also had different mutation spectrums. Analyses of these data allowed us to delineate a detailed intratumoral genetic landscape at a single-cell level. Our pilot study demonstrates that ccRCC may be more genetically complex than previously thought and provides information that can lead to new ways to investigate individual tumors, with the aim of developing more effective cellular targeted therapies. Copyright Â© 2012 Elsevier Inc. All rights reserved.