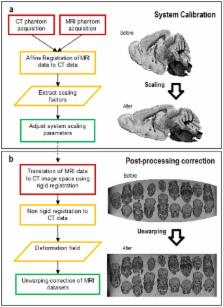 High-field, pre-clinical MRI systems are widely used to characterise tissue structure and volume in small animals, using high resolution imaging. Both applications rely heavily on the consistent, accurate calibration of imaging gradients, yet such calibrations are typically only performed during maintenance sessions by equipment manufacturers, and potentially with acceptance limits that are inadequate for phenotyping. To overcome this difficulty, we present a protocol for gradient calibration quality assurance testing, based on a 3D-printed, open source, structural phantom that can be customised to the dimensions of individual scanners and RF coils. In trials on a 9.4 T system, the gradient scaling errors were reduced by an order of magnitude, and displacements of greater than 100 µm, caused by gradient non-linearity, were corrected using a post-processing technique. The step-by-step protocol can be integrated into routine pre-clinical MRI quality assurance to measure and correct for these errors. We suggest that this type of quality assurance is essential for robust pre-clinical MRI experiments that rely on accurate imaging gradients, including small animal phenotyping and diffusion MR.

Measures of the Amount of Ecologic Association Between Species

Marc Modat, Gerard R. Ridgway, Zeike Taylor … (2010)
A large number of algorithms have been developed to perform non-rigid registration and it is a tool commonly used in medical image analysis. The free-form deformation algorithm is a well-established technique, but is extremely time consuming. In this paper we present a parallel-friendly formulation of the algorithm suitable for graphics processing unit execution. Using our approach we perform registration of T1-weighted MR images in less than 1 min and show the same level of accuracy as a classical serial implementation when performing segmentation propagation. This technology could be of significant utility in time-critical applications such as image-guided interventions, or in the processing of large data sets. Copyright 2009 Elsevier Ireland Ltd. All rights reserved.

Simon J. Doran, Liz Charles-Edwards, Stefan A Reinsberg … (2005)
MR images are known to be distorted because of both gradient nonlinearity and imperfections in the B0 field, the latter caused either by an imperfect shim or sample-induced distortions. This paper describes in detail a method for correcting the gradient warp distortion, based on a direct field mapping using a custom-built phantom with three orthogonal grids of fluid-filled rods. The key advance of the current work over previous contributions is the large volume of the mapping phantom and the large distortions (>25 mm) corrected, making the method suitable for use with large field of view, extra-cranial images. Experimental measurements on the Siemens AS25 gradient set, as installed on a Siemens Vision scanner, are compared with a theoretical description of the gradient set, based on the manufacturer's spherical harmonic coefficients. It was found that over a volume of 320x200x340 mm3 distortions can be successfully mapped to within the voxel resolution of the raw imaging data, whilst outside this volume, correction is still good but some systematic errors are present. The phenomenon of through-plane distortion (also known as 'slice warp') is examined in detail, and the perturbation it causes to the measurements is quantified and corrected. At the very edges of the region of support provided by the phantom, through-plane distortion is extreme and only partially corrected by the present method. Solutions to this problem are discussed. Both phantom and patient data demonstrate the efficacy of the gradient warp correction.